New York, April 24, 2012—“Everyone wants to answer the question, ‘What would Edmund Burke do?’” U.S. Supreme Court Justice Samuel A. Alito told a capacity audience at Columbia Law School’s conference on Burkean Constitutionalism. “But I’m not going to do that. Any approach to judging must be justified on its own terms, and not on the grounds that it’s what Edmund Burke would do if he were in our shoes.”

Burkean scholars from around the country gathered at the April 10 conference to discuss jurisprudence attributed to Edmund Burke, the 18th century British legislator who is sometimes called the father of classical conservatism. Panelists addressed two questions: What is Burkean Constitutionalism? And is it a good idea? 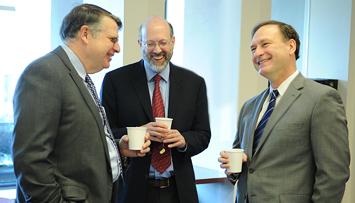 Michael C. Dorf, the Robert S. Stevens Professor of Law at Cornell University Law School, explained Burkeanism in the following terms: “Social institutions are highly complex and often reflect the accumulated but tacit wisdom of long experience. Therefore, proposals for rapid, radical change should be met with skepticism, because they will frequently have unintended and undesirable consequences.”

In his lunchtime speech, Alito wrested Burke’s legacy from the realm of theory. “He was not a theorist, and I am not a theorist,” Alito said, before distinguishing himself from other members of the current Supreme Court. “I feel almost outnumbered,” he said, noting that the Court has four former professors. “The Supreme Court these days is the most academic in the history of the country. We’re at a tipping point where we might tip into the purely theoretical realm.”

Alito noted that Burke is hard to pigeonhole. On one hand, Burke lauded tradition, admired Adam Smith, and opposed the redistribution of wealth. On the other hand, many emphasize Burke’s progressive leanings: He tried to rein in the power of the Crown and lessen persecution of Catholics in Ireland. He supported the revolution in America, but criticized the one in France. Underscoring the categorization problem, Alito pointed out that he, President Barack Obama, and Sarah Palin all have been described as “Burkean.”

During the morning discussion among legal scholars, each professor offered his or her own version of Burkeanism with respect to constitutional interpretation. Some believe Burkeanism means judges should seek out the consensus view within the legal community of the day, rather than try to divine the original meaning of a law. Others suggest that Burkeanism means following the model of common law, based on the notion that past decisions represent, in the words of Betts Professor of Law Peter Strauss, the “accumulated wisdom of the crowds.” 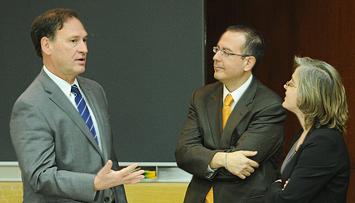 For Alito, the virtue of Burke is stability: If judges are bound to respect prior decisions, he said, they’re less likely to risk the unintended consequences of “ill-considered judicial innovations.”

Sticking to established rules, Alito said, is good policy for judges who make decisions under isolated conditions and with limited resources. He noted that judicial decisions “are discrete exercises of individual judgment, so they are more prone to error or ideological manipulation.

”One of Burke’s “core insights,” Alito continued, “was that the individual is foolish but the species is wise. Society is so incredibly complex that the solitary human mind is incapable of understanding how all the pieces fit together. Because the various components of the social order are interrelated in ways that are subtle and innumerable, it is almost impossible to predict all the consequences that will result from a rule. As a general matter, we can have greater confidence in established rules that have been tested and refined over time.”

The conference was made possible thanks to the support of Roger Hertog, chairman emeritus of the Manhattan Institute for Policy Research.