U.S. Attorney Preet Bharara '93 on the Job of Justice 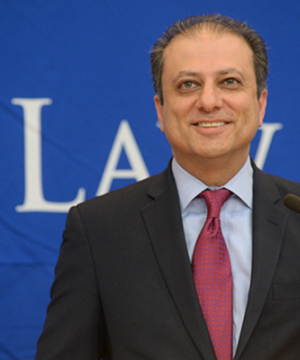 When Preet Bharara ’93 was in 10th grade, he entered a public speaking competition that challenged contestants to recite a previously delivered speech. Long before his legal aspirations began to take shape, he chose Clarence Darrow’s summation in The People v. Henry Sweet, in which the legendary trial attorney argued that the essence of justice did not reside in the law alone.

“Ninety years later, these words remain relevant to everything going on in our country, and in our world,” the U.S. Attorney for the Southern District of New York told students on Nov. 29 at Columbia Law School. Quoting Darrow again—“freedom comes from human beings, rather than from laws and institutions”—Bharara added, “No class, no professor, no law book has ever conveyed to me more powerfully or persuasively what it means to be a human being as a lawyer than those words.”

Invited to campus to speak as part of the Social Justice Initiatives (SJI) Visitor from Government Practice speaker series, Bharara delivered the lecture “The Job of Justice: Do We Rest Our Hopes Too Much Upon Constitutions?,” focusing on how far the law can go in creating justice, which, he said, is “ultimately accomplished by people.”

“The law is merely an instrument, and without the involvement of human hands, the law is as lifeless and uninspiring as a violin kept in its case,” he explained.

Bharara—who, just a day after his lecture, announced he would accept President-elect Donald J. Trump’s offer to remain in his post during the next presidential administration—also discussed what it means to “lawyer like a human being,” which includes speaking simply and listening intently.

As the U.S. Attorney, Bharara oversees the investigation and litigation of all criminal and civil cases brought on behalf of the United States in the Southern District. He leads more than 220 assistant U.S. Attorneys in a high volume of cases that include domestic and international terrorism, narcotics and arms trafficking, white-collar crime, public corruption, gang violence, organized crime, and civil rights violations. This work has earned him the nickname “the sheriff of Wall Street.”

In his more than 20 years as a lawyer, Bharara has spent 16 in government service, including five as an assistant U.S. Attorney in the Southern District and four as chief counsel and staff director of the U.S. Senate Judiciary Committee’s Subcommittee on Administrative Oversight and the Courts. As noted by SJI Dean Ellen Chapnick, who introduced Bharara, he is known for urging young attorneys to devote at least five years of their careers to working in public interest law. But whatever avenue students choose to take after graduation, Bharara reminded them that justice “sometimes springs more from the heart than from the head.”

“Don’t ever forget to keep your heart full, because I believe nothing great was ever accomplished with a cynical heart,” he said. “Above all things, remember always to act and feel like a real person, which seems like an odd admonition, but lawyers forget it all the time. And remember also that everyone you come across…they are human beings too.”

In Bharara’s collegial and oftentimes humorous talk, he included many personal anecdotes: from the success of his brother, digital media and ecommerce entrepreneur Vinit Bharara ’96, to memories of his favorite Law School professor, Marvin A. Chirelstein, who passed away in 2015. During a question-and-answer period with students following his lecture, Bharara candidly shared his thoughts on the best career path for aspiring U.S. Attorneys, tips for working with difficult bosses, and fighting public corruption—among other topics.

But his underlying message was constantly clear: that the law is not self-actualizing. It needs lawyers to bring it to fruition.

“The people who have come before you at this law school, and at other fine law schools…they have fashioned you a fine instrument,” Bharara said. “Now this law school, of which I’m a proud graduate, is giving you a further gift—it is teaching you how to play. And in the coming years, as you master the form and you perfect your craft, I hope you don’t only use your head…use your heart also. Don’t just play the notes. Make music.”