New York, April 5, 2012— Writer and historian Ramachandra Guha of the London School of Economics and Political Science used the terms imaginative, ambitious, and reckless to characterize India during a March 22 lecture titled “The Past and Future of Indian Democracy.” Guha outlined for a Columbia Law School audience a range of factors responsible for India’s democratic achievements while also examining the many challenges the republic must overcome to ensure sustained and inclusive growth. 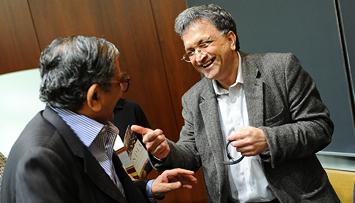 The event culminated a three-part lecture series presented by the Dr. B.R. Ambedkar Chair in Indian Constitutional Law and organized by University Professor Jagdish Bhagwati. Two years ago, India endowed the Law School with both a professorial chair devoted to Indian constitutional law and a fellowship named after Bhagwati.

Sree Sreenivasan, professor and dean of student affairs at Columbia Journalism School, chaired the lecture and warmly welcomed Guha, praising India After Gandhi, Guha’s comprehensive account of the world’s largest democracy. “When people ask me about India, the one book I now tell them all to read is Ram Guha’s, because he does a wonderful job of explaining India to Americans and the world,” he said. 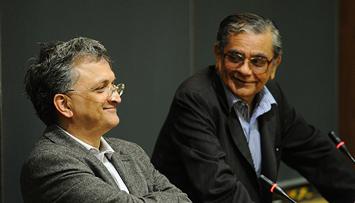 Guha began his talk with a bold assertion. “I have a simple thesis to defend today: India is the most interesting country in the world, period,” he said. “Never before in human history was a territory so diverse and divided constituted as a single, unified nation.”

Guha explained that India eschewed the European and American models of nation-building, since it is unable to claim allegiances to a common faith, language, or even enemy, rendering it an “unnatural nation.” Following its independence in 1947, India adopted the universal vote—unlike the West, where the franchise was granted in stages—providing the privilege to a largely illiterate population. “The first elections were called the biggest gamble in history,” said Guha.

Even ardent sympathizers of India forecasted its decline after the death of its first prime minister, Jawaharlal Nehru, but the nation’s united and democratic survival was safeguarded by five principle factors, said Guha. He cited healthy participation in nationwide elections (“marginalized communities vote in larger proportions in elections,” Guha stated); preservation of linguistic pluralism (most aptly reflected in the Indian rupee note, which is illustrated with 17 different scripts); the existence of a free press and an independent judiciary; the all-encompassing game of cricket; and, perhaps most surprising, the vibrant Hindi film industry. “The great poet and script writer Javed Akhtar once said there are 28 states in the Indian republic and the 29th is the Hindi film,” said Guha. “I expanded that insight to say the 29th state is actually a receptacle and showcase for the varied influences of the 28 states. It’s a bastion of secularism.”

Turning to India’s future, Guha offered the audience a second and somewhat surprising thesis: “Instability is India’s destiny,” he proclaimed. Guha countered his reasons for India’s democratic promise with five challenges that threaten its course—identity-based conflicts, secessionist movements (particularly in the north and eastern states of Kashmir, Manipur, and Nagaland), unrest in neighboring countries, environmental degradation, and, finally, the growing Maoist insurgency plaguing India’s heartland. “Any liberal democrat, such as me, must be unequivocal about this: The use of violence to settle political and economic disputes cannot be justified,” Guha said. “But underlying the Maoist insurgency are deep disparities in economic growth and development.”

Guha pointed to his home city of Bangalore as a positive manifestation of India’s connection to the larger world economy, praising the software industry for generating a large number of jobs to overcome India’s chronic foreign- exchange problem, but he also took note of globalization’s more sinister face—fuel for the aforementioned Maoist insurgency. “The dark side is manifested in the center and east of India, where globalization has meant the rapacious, unregulated, and brutal exploitation of mineral resources,” he explained.

In closing, Guha prescribed the need for a more robust state to face the challenges he outlined. “Without the Indian state performing as it did in the first decades of independence, we would have not been united, nor would we have been democratic,” he said. “Now, unless the Indian state is renewed and made more capable and focused, our political and economic future is at peril.”