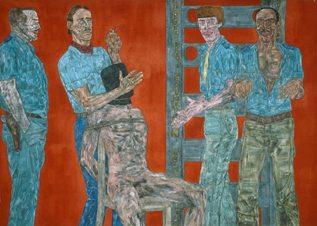 Sept. 24, 2008 (NEW YORK) – Together with members of the Columbia Law School community, Kendall Thomas, Professor of Law and director of the Center for the Study of Law & Culture, will commemorate the 60th anniversary of the signing of the Universal Declaration of Human Rights with Human Rights: Culture, a multimedia performance of spoken word, painting, film, video, photographs, movement, music and song.
Human Rights: Culture grows out of teaching, writing and other work I’ve been doing for some years on the intersection of human rights and culture, and is informed by a belief that lawyers and legal educators can play an important role in building a robust culture and consciousness of human rights outside the legal profession,” Thomas said.
“Since 2005, I’ve collaborated with the celebrated choreographer William Forsythe on Human Writes, a movement installation work on the Universal Declaration. From Brussels to Istanbul, my experience with the audiences who’ve seen this work has persuaded me that human rights literacy shouldn’t be restricted to lawyers — it has to be disseminated throughout the broader society.” Thomas added, “Human Rights: Culture is another effort to link law and the arts as tools of popular human rights education.”
On December 10, 1948, the General Assembly of the United Nations adopted and proclaimed the Universal Declaration of Human Rights. It comprises 30 Articles that set a common standard for nations to promote respect for the rights and freedoms enumerated in them. The first declaration is that “All human beings are born free and equal in dignity and rights.”
Thomas said that Human Rights: Culture is a product of an interdisciplinary seminar on human rights and culture that he has taught at Columbia Law School for several years with Professor Thomas Keenan, who directs the Human Rights Project at Bard College. Professor Thomas is particularly inspired by the Declaration’s Article 26, which reads that “everyone has the right to education” and Article 27,  that “everyone has the right to freely participate in the cultural life of the community.”
WHAT: “Human Rights: Culture,” a seminar performance project
WHEN: October 7, 2008, 7 p.m.
WHERE: Miller Theatre, 2690 Broadway (at 116th Street)
PARTICIPANTS: Columbia Law School Professor Kendall Thomas and Law School and University faculty, students and staff. Admission is free.
Journalists who wish to attend should contact Public Affairs at 212-854-2650 or [email protected]
Columbia Law School, founded in 1858, stands at the forefront of legal education and of the law in a global society. Columbia Law School joins traditional strengths in international and comparative law, constitutional law, administrative law, business law and human rights law with pioneering work in the areas of intellectual property, digital technology, sexuality and gender, and criminal law.