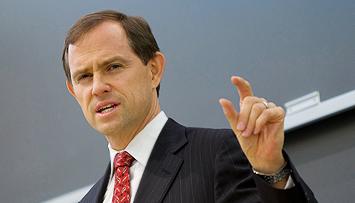 New York, Nov. 9, 2011—United Nations Assistant Secretary-General for strategic planning and policy coordination Robert C. Orr shared a broad overview of challenges facing the global community with a Columbia Law School audience last month. Orr spoke as a guest of the Center on Global Governance, co-directed by Professor Richard Gardner and Professor Michael Doyle. He described his job as a rarified one that  takes him one week to melting glaciers at the North Pole to observe climate change firsthand, to meetings with dozens of world leaders the next. 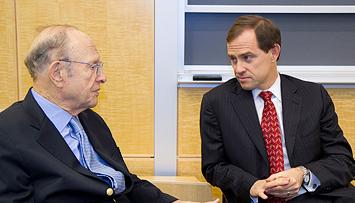 “It makes for some interesting days,” Orr said of his job during an address titled, “We the Peoples: the UN’s Next Decade.” Daily, he tackles a diverse set of challenges, from food security to global health to counterterrorism. “My job is to look to the horizon,” he said of his position’s long-term focus. In addition to addressing global concerns, he also oversees internal reform efforts within the United Nations.

Orr noted that Gardner himself is “no stranger to international diplomacy,” having served as U.S. Ambassador to Italy from 1977 to 1981 and as U.S. Ambassador to Spain from 1993 to 1997. Orr also stated that the Center on Global Governance’s widespread exploration of global issues dovetails neatly with his involvement in the diverse range of UN initiatives.

Orr called climate change “the ultimate global challenge.” Beyond the usual difficulty of getting dozens of nations to cooperate and make sacrifices, Orr noted that the current economic malaise has pushed the issue to the back burner of the international global agenda. Prompt, decisive action is needed now, Orr warned, or we will witness adverse consequences from climate change within our own lifetimes. He insisted that the time is long overdue for a “global, comprehensive, binding climate deal.”

The “global youth bulge” presents another long-term challenge, Orr added. The unprecedented number of people under the age of 30 has “led to structural pressure” on nations, governments, economies, and limited resources like energy and food, he said.

As Orr fielded questions from audience members, he pointed to the UN’s successes in counterterrorism, nation-building, arms disarmament, and sustainable development. “The UN has become more relevant than it’s been in its entire history,” Orr said.