New York, Nov. 9, 2011—Columbia Law School students got an insider’s view of the judicial confirmation process on Nov. 2, when two federal judges spoke about their experiences leading up to confirmation. The panelists were U.S. District Judges Jane Magnus-Stinson and Denise Casper, who hear cases in the Southern District of Indiana and the District of Massachusetts respectively. Judge Magnus-Stinson was confirmed by the U. S. Senate on June 7, 2010; Judge Casper on Dec. 17, 2010.
Noting that the road to the bench can be long—for Judge Casper, the formal process was 18 months from beginning to end—both speakers encouraged law students not to be deterred from applying, when the time comes. Judge Magnus-Stinson called the period following her hearing “the longest two weeks of my life,” but concluded that the ordeal was worthwhile.
“On the federal bench, your brain gets worked in all different ways,” she said. “This is one of the best jobs I could ever have.” She added that so far, she has heard cases involving patents, employment law, and the nearby federal prison and pharmaceutical companies, as well as a methamphetamine conspiracy. For this very reason, both panelists urged students to consider clerkships with judges on the U.S. district courts, with their richness of work and opportunity to learn about trial practice. 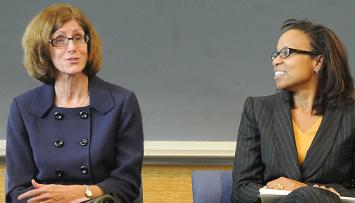 Judge Jane Magnus-Stinson, left, and Judge Denise Casper
The speakers were introduced by Michael Shenkman ’06, a fellow with the Center for Law and Politics who advised on judicial nominations when he worked in the Office of Legal Policy at the U.S. Department of Justice in 2009 and 2010. Noting that he first met Judges Casper and Magnus-Stinson during their confirmation processes, Shenkman called working with President Barack Obama’s nominees “an enormous privilege” and “hands-down” the best part of the job.
Shenkman teaches the seminars for Columbia Law School’s externship on the federal government in Washington, D.C., including both a mini-course on ethics in the federal government and a semester-long course on federal government lawyering.
The speakers described the many steps in the process, which include being tapped as a candidate with the support of home state senators; enduring months of vetting by the U.S. Department of Justice, the Federal Bureau of Investigation, and the American Bar Association; filling out a voluminous personal questionnaire; preparing for and testifying at a hearing of the Senate Judiciary Committee; answering written questions on a tight timeline; and then waiting for the senators to vote.
Judge Magnus-Stinson said she owes much of her success in the confirmation process to the combined support of Richard Lugar, the Republican U.S. senator from Indiana, and Evan Bayh, an Indiana Democrat who served as a U.S. senator from 1999 to 2011. Judge Magnus-Stinson previously served as a magistrate judge at the federal level, a state judge, and counsel and deputy chief of staff to Bayh when he was governor of Indiana from 1991 to 1995.
“Senators Lugar and Bayh had an excellent relationship,” she recalled. “When there is a split in the political party, that can create tension for a judicial nominee, but these two worked together closely.”
Judge Casper served as an assistant U.S. attorney in Boston from 1999 to 2005 and as the deputy district attorney for the Middlesex district attorney’s office in Cambridge, Massachusetts, from 2007 until her confirmation in 2010. She entered the judicial selection process in the summer of 2009, when she was identified by a search committee reporting to the late Senator Edward Kennedy.
Judge Casper said she was fortunate—and unusual—in having had the support of four home state senators during the process: Senator Kennedy, Senator Paul Kirk (who served from September 2009 to February 2010), and current Senators John Kerry and Scott Brown. Even with such backing, submitting to vetting processes that solicit input from many lawyers and others in the community presents challenges, Judge Casper said.
“You are supposed to treat the process as confidential, but everybody in your life knows this is going on. Attorneys on the other sides of your cases are getting calls, as are your neighbors and former roommates.”
Judge Magnus-Stinson said that she felt more at ease after she was formally nominated, “because suddenly I had a team behind me, working for me and with me to get me through the process.” The inquiries, she said, were thorough. “They want to know every speech you’ve ever given, every article you’ve ever written, every place you’ve ever lived, and every job you’ve ever had,” Judge Magnus-Stinson recalled.
In conclusion, both judges said the confirmation process they experienced was fair.
“I think throughout the process I was respected by the DOJ and treated well by the senators,” Judge Casper said. Judge Magnus-Stinson agreed. Both judges said they were grateful to have run the confirmation gauntlet—and were now focused on the demands of the job that followed it.
“As the presidential commission on my wall reminds me, it is an appointment during ‘good behavior’ and not a lifetime post,” Judge Magnus-Stinson said.
# # #
Columbia Law School, founded in 1858, stands at the forefront of legal education and of the law in a global society. Columbia Law School joins traditional strengths in international and comparative law, constitutional law, administrative law, business law, and human rights law with pioneering work in the areas of intellectual property, digital technology, sexuality and gender, criminal, and environmental law.