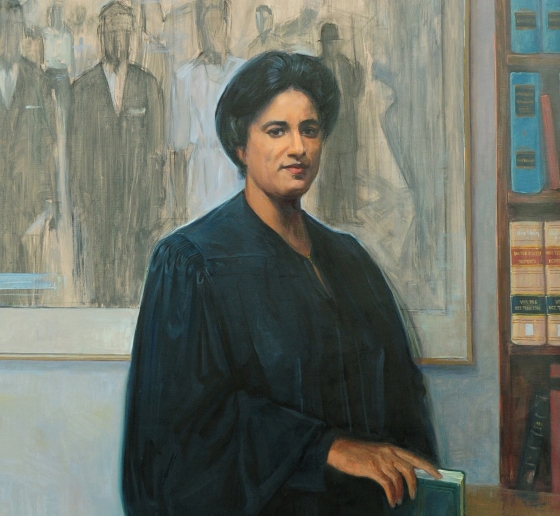 With her appointment to the United States District Court for the Southern District of New York on January 25, 1966, Judge Constance Baker Motley '46, became the first African-American woman appointed to the federal judiciary. She was appointed by President Lyndon B. Johnson. When Judge Motley became Chief Judge on June 1, 1982, she was the first woman and the first African-American woman to serve as such for the Southern District of New York, the largest federal trial bench in the country. She so served until October 1, 1986, when she assumed senior status.

Constance Baker was born on September 14, 1921, in New Haven, Connecticut. She graduated from New York University in 1943. In 1946, she received her law degree from Columbia University, and married real estate and insurance broker, Joel Wilson Motley. Motley joined the legal staff of the NAACP Legal Defense and Educational Fund, Inc. when she was a senior at Columbia University School of Law. Subsequently, as Associate Counsel, she became its principal trial attorney.

From 1945 to 1964, Judge Motley worked on all of the major school segregation cases supported by the NAACP Legal Defense Fund. Among the cases in which she played a prominent role were desegregation cases involving the universities of Mississippi, Alabama, Florida, Oklahoma, Georgia, and Clemson College in South Carolina.

On February 27, 1962, Judge Motley argued Turner v. City of Memphis before the United States Supreme Court, a case which resulted in desegregating the Dobbs Houses Restaurant in the Memphis Municipal Airport Terminal. On May 27, 1963, Judge Motley won the Supreme Court case of Watson v. City of Memphis, which required immediate desegregation of all recreational facilities in Memphis, thus defeating Memphis' plan to desegregate these facilities over a 12-year period. In this case, the Court also warned that the period of transition from segregated to desegregated schools as ordered in Brown must be accelerated.

On May 20, 1963, the Supreme Court handed down decisions in several sit-in cases reversing the convictions of many African-American students. One of these cases, Gober v. City of Birmingham, involving 10 African-American students who had sat in at dime store lunch counters in Birmingham, was argued by Judge Motley. She also argued the case of Shuttlesworth v. City of Birmingham, involving the arrest and conviction of Reverend Fred L. Shuttlesworth and Reverend Charles L. Billups for urging the students to engage in civil disobedience. Those convictions were also reversed. On June 22, 1962, Judge Motley also prevailed in another sit-in case, Bouie v. City of Columbia, S.C. Lupper v. Arkansas, which she argued in the Supreme Court following enactment of the Civil Rights Act of 1964, was one of the cases which resulted in a Supreme Court ruling abating all pending state court prosecutions for peacefully seeking service in places of public accommodation covered by the new law. In total, Judge Motley won nine out of the ten cases she argued before the Supreme Court.

After nearly 20 years with the NAACP, Judge Motley chose to serve on the New York State Senate. On her election to the New York State Senate in February of 1964, she became the first African-American woman to serve in that branch of the Legislature. She immediately began a campaign for the extension of civil rights legislation and for additional low and middle income housing.

In February of 1965, Judge Motley was elected by the Manhattan members of the New York City Council to fill a one-year vacancy in the office of President of the Borough of Manhattan, and thus became the first woman to serve in that office, and as a member of New York City's Board of Estimate. She was elected to a full four-year term in November 1965, when she became the first candidate for the Manhattan Presidency to win endorsement of the Republican, Democratic, and Liberal Parties. Judge Motley, as Borough President, drew up a seven-point program for the revitalization of Harlem and East Harlem, and won a pioneering fight for $700,000 to plan for those and other underprivileged areas of the city.

With her appointment in 1966, Judge Motley became the first African-American woman appointed to the federal judiciary. She became the Chief Judge in 1982, and assumed senior status in 1986.