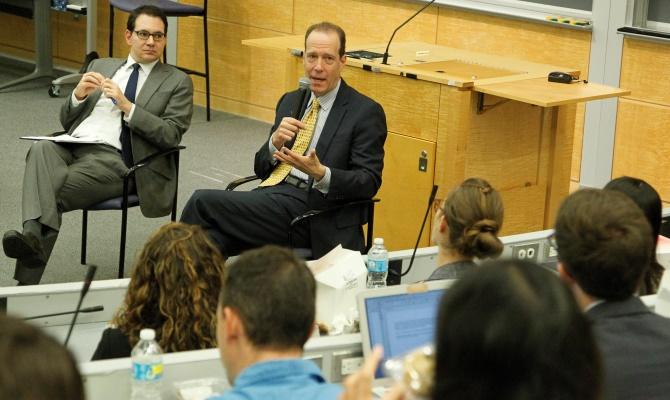 For decades after President Harry S. Truman formed the National Security Agency (NSA) under a secret order in 1952, the defense organization operated outside the purview of the American people. That changed in 2013, when Edward Snowden revealed the NSA’s mass domestic surveillance program, forcing the agency’s top officials to better explain their mission to a skeptical public.

Snowden’s revelations, indirectly, created the conditions NSA General Counsel Glenn S. Gerstell ’76 addressed during an Oct. 20 talk at Columbia Law School.  Gerstell, who joined the NSA in August 2015, after a nearly 40-year career with Milbank, Tweed, Hadley & McCloy, discussed the nature of his work, privacy in the digital age, and the key national security challenges the next administration will face.

The conversation would not have occurred pre-Snowden, when the NSA operated under a “no comment” policy, noted event moderator Professor Matthew C. Waxman, faculty chair of the Law School’s Roger Hertog Program on Law and National Security. As general counsel, Gerstell's duties include ensuring that NSA activities comply with the U.S. Constitution and other applicable American laws, as its 40,000 employees guard the nation against terror and cybersecurity threats.

“It’s critically important the nation has a clear understanding—as much as possible given the classified nature of it—about what the NSA does and does not do,” Gerstell said. “The more we can be transparent about what we do—what orders of the Foreign Intelligence Surveillance Court have been issued, what presidential directives have been issued—the more the American public will understand our mission, the rules in which we operate, and how heavily regulated we are.”

Being a part of the NSA, Gerstell said, provides an opportunity to work on an “unbelievable variety of cases”—including questions about overseas intelligence law, domestic incidents, and cybersecurity—and to team with talented people who share a collective sense of purpose. “I’ve had situations where I signed a piece of paper on my desk that directly helped rescue a hostage somewhere overseas,” he recalled, describing his job as “unbelievably rewarding.”

While the NSA is required to follow American law, its intentions are not necessarily as cut and dried when it comes to following the law in countries where it is gathering information, explained Waxman, who served in senior positions at the State Department, Defense Department, and National Security Council. “A lot of the espionage business is about circumventing or even breaking local law,” he said.

Waxman probed Gerstell’s position on encryption, stating that “more hidden private data complicates at least one of the NSA’s missions, which is to collect and interpret signals.”

Gerstell agreed: “We are seeing end-to-end encryption on some messaging applications and e-mails that are used by terrorists. Those encryption sources present obstacles. The terrorists the NSA combats are “very adaptive and sophisticated.”

These were just some of the insights Gerstell shared with students during the event, which is part of the Tweed, Hadley & McCloy Faculty-Student Intellectual Life Series.  As it happens, the next speaker in the ongoing series, on November 9th, will be Ben Wizner, director of the ACLU’s Speech, Privacy, and Technology Project and principal legal adviser to Edward Snowden, who will talk with David Pozen about challenging the underlying assumptions of a security state in a talk called “Against ‘National Security.'"