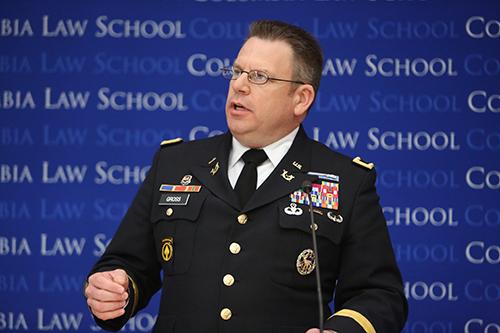 The U.S. military’s former chief operational lawyer, retired Brigadier General Richard C. Gross, has taken on a new role at Columbia Law School this fall: senior fellow in both the Human Rights Institute (HRI) and the Roger Hertog Program on Law and National Security. He is the first person to hold this joint position.

As a senior fellow, Gross brings an in-depth military perspective to the Law School’s offerings related to the law of armed conflict. While serving as a guest lecturer, he helps design the national security law and human rights law programs, and assists in their collaborations with such institutions as the United States Military Academy at West Point and the Department of War Studies at King’s College, London. A graduate of West Point and the University of Virginia Law School, Gross also uses his valuable educational and professional insight to mentor students interested in pursuing careers in national security and human rights.

“General Gross has been at the center of decision-making and diplomacy on such cutting-edge issues as counterterrorism and cyber-warfare,” said Matthew C. Waxman, the Liviu Librescu Professor of Law and chair of the Roger Hertog Program, earlier this year. “Our programs have been collaborating on many intersecting issues, and we’re excited for General Gross to be a part of that.”

During his 30-year career, Gross served as counsel to the Chairman of the Joint Chiefs of Staff, legal adviser to U.S. Central Command, and judge advocate in the Joint Special Operations Command. He had multiple combat deployments to Iraq and Afghanistan, including a 13-month stint as the principal legal adviser to U.S. and NATO commander General Stanley A. McChrystal. During his last four years at the Joint Chiefs of Staff, Gross was the senior military member of the interagency lawyers’ group, which advised the National Security Council and cabinet-level officials on matters of national security.

Over the past several years, Gross has been an actively engaged partner to the Law School. In 2012, he was asked to serve on the steering committee of HRI’s Project on Harmonizing Standards for Armed Conflict. In 2013, Professor Sarah H. Cleveland, the Louis Henkin Professor of Human and Constitutional Rights and co-director of HRI, named Gross keynote speaker of the Law School’s daylong conference, “From Gettysburg to Guantanamo,” which marked the 150th anniversary of the world’s first attempt to codify the laws of war. In the years since then, he has regularly lectured in Cleveland’s and Waxman’s classes, where he has offered his firsthand insight and guidance to students.

“I’ve really enjoyed all of my interactions with the amazing students at Columbia,” he said. “They ask hard questions, and are always well prepared, but the discourse is civil and fascinating. It’s been such a great experience that when Matt and Sarah mentioned this opportunity, I immediately said yes.”

You can read more about Gross’ appointment and the Law School’s work in national security law and human rights law here.