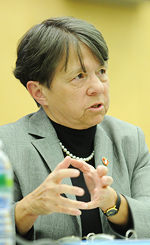 “I don’t believe legal prosecutions are the only way to combat this threat,” said White, who prosecuted dozens of terrorist cases as U.S. Attorney for the Southern District of New York from 1993 to 2002. “This is not a conventional war, but in my view, much of what we need to do to safeguard the nation’s security is a matter for the military.”

Speaking before a capacity audience, White discussed some of the cases she was involved in, as well as the role of civilian criminal courts, military tribunals, and New York Police Department surveillance of Muslim student groups in the war on terrorism. The event was co-sponsored by The Columbia Society for International Law , The Columbia National Security and Law Society, and Social Justice Initiatives. It was organized by Marina Olevsky ’12 and moderated by Professor Matthew Waxman, faculty co-chair of the Roger Hertog Program on Law and National Security.

White was appointed by President Bill Clinton just weeks after the first bombing of the World Trade Center in February 1993. “Little did I know then that international terrorism was about to become the Southern District of New York’s and my top priority for all the nearly nine years of my tenure,” she said. Some 30 international terrorists were charged in New York federal court, White recalled, and while some remained fugitives, all those brought to trial were convicted.

Among the suspected terrorists indicted during her tenure were Ramzi Ahmed Yousef, who was tried and convicted in connection with the 1993 bombing and an unsuccessful 1995 plot to blow up planes flying into the U.S. ; "Blind Sheikh" Omar Abdel Rahman, who was convicted of conspiracy in the 1993 bombing; Khalid Sheikh Mohammed, the alleged mastermind of the September 11 attacks who was captured in Pakistan in 2003 and now faces trial by a military tribunal; and Osama Bin Laden, who remained a fugitive until he was killed by U.S. Navy SEALS last year. White said her philosophy as a prosecutor was to indict broadly, as soon as there was credible evidence. 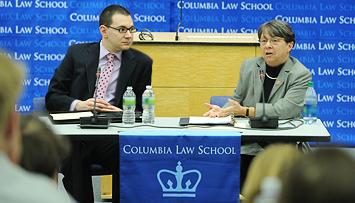 Asked by Waxman about her views on how suspected terrorists should be prosecuted, White said, “Mine is a pragmatic view. You have to keep your options open.” She noted that military tribunals operate under different rules, have about an 80% conviction rate, and sentences are often less severe than in civilian criminal court, but it is easier to protect judges, prosecutors and courthouses. “We should not be defensive about military commissions,” she said. “They are in my view constitutional; they go beyond what the constitution requires.”

In response to a question about the controversy concerning New York Police Department surveillance of Muslim student groups, White referred to a March speech by Police Commissioner Ray Kelly about what was done and why. She said there was evidence that some post-September 11 plots in the U.K. were hatched in pro-Muslim student groups and so the NYPD did some public source research and found some “disturbing things” in our area while searching the Internet. “These are difficult issues,” she said. “Is it profiling? Not if there is factual evidence.” 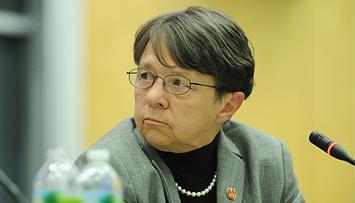 When asked by a student about the possibility of trying alleged terrorists in their own countries, White replied, “My concern is whether we can we trust those systems. I certainly trust the fairness, the robustness, independence of the federal judiciary [in the United States]. I don’t necessarily feel that way about the judicial mechanisms in some other countries.”

White, now chair of the litigation department at Debevoise & Plimpton, urged students to keep up with coverage of terrorist attacks she said are happening almost every day around the world, and to follow the upcoming military proceedings at Guantanamo. “Every citizen and every lawyer and law student has a duty to become knowledgeable about the dangers of terrorism,” she said. “It’s a grave threat, and will be for your lifetimes."