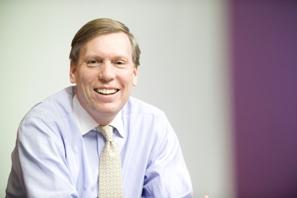 Having started out in the company’s legal department, Stitzer slipped into management, helping to bring about a series of acquisitions - including the master stroke of buying Adams Gum at a time when the gum market was growing much faster than candy – before rising swiftly to CEO. He then set about successfully implementing a massive cost-reduction scheme.

It seemed – like the eponymous hero of Roald Dahl’s classic tale, Charlie and the Chocolate Factory – that Stitzer had indeed found his golden ticket.

Then came the turbulence of the past two years: a salmonella scare at a U.K. factory, a Nigerian subsidiary embroiled in an accounting scandal, and allegations of bowing to shareholder activism in the form of entrepreneur billionaire Nelson Peltz and the planned sale of the company’s U.S. drinks business. Add to that a languishing share price on London’s FTSE 100.

Surrounded by framed smiling photographs of his wife and 20-something son and daughter in a modest office overlooking London’s Berkeley Square, just back from a whirlwind tour taking in company outposts in both Texas and Singapore, Stitzer muses back to his own youthful self on life after Columbia.

“I saw myself as a career lawyer. A partner in a large New York City law firm on a five- or six-year track.”

The catalyst behind the transformation from a New York City career lawyer who didn’t travel abroad until the age of 34, to London-based CEO and the first foreign head of Cadbury Schweppes, was, says Stitzer, the arrival of his now-25-year-old daughter, Cate.

“After six years of marriage, my wife fell pregnant with our first child. At the time, she called my company – Lord, Day & Lord – ‘Lord, Day and Night.’ I billed more hours than anyone else at the firm for three years in a row.

“I reexamined my priorities. The Cadbury Schweppes guys asked me to come on board [Stitzer had worked for the company to support himself through law school], and it was a chance to move to the suburbs of Connecticut near my wife’s family.”

Stitzer is disarmingly down to earth. One senses that to hold Cadbury Schweppes together through the events of the past few years – not least bringing in a massive streamlining involving laying off around 7,500 workers as part of a drive to increase margins from around seven percent to the mid-teens by 2011 – he must also have an iron resolve.

Yet, his conversation is peppered with modest tales of how fortuitous events rather than blind ambition took him on his particular career course. Once he reached Cadbury Schweppes, his thoughts extended to perhaps one day becoming “head of the legal department, over time.” Instead he had done this within a short time, before moving into strategy, then sales and marketing, and finally into the chief spot in May 2003.


A former mergers and acquisitions lawyer, Stitzer helped to steer Cadbury Schweppes through 20 acquisitions worth $6 billion in just three years from 2000 – proving thereby his fitness to take on the top job – but now relishes taking a back seat when it comes to law.

“I have to say, I’m glad I have a legal department. My general counsel would say that I pretty much leave him alone. I don’t try to do the legal job, but I have an appreciation” for that role, Stitzer said.

Slim at 55, Stitzer “eats confectionary every day - but I exercise every day too.” For the curious, his current favourite is a butterscotch chocolate bar by Green & Blacks, a small U.K. organic chocolate manufacturer recently acquired by Cadbury Schweppes.

Just as Dahl’s fictional Charlie inherited the chocolate factory from Willy Wonka, so Stitzer sees himself holding the fort for the devout Quaker Cadbury family, who founded the company in 1860 in order to promote drinking chocolate and tea as alternatives to alcohol. Laying off employees was tough, given the community-minded roots of the founders.

“It’s very difficult. You’re taking actions that will benefit the majority of colleagues. So that 80 percent can continue on. Even when you make those decisions, it’s important to treat people with respect and sensitivity.”

The much talked about sale of the company’s U.S. drinks arm has sent its stock on an up-and-down course. It began in March, when Cadbury announced that it would either sell the arm, or launch an initial public offering or demerger, in the belief that the company’s best potential for growth lies solely in confectionary.  But the process fell foul to the global credit crunch over the summer, triggered by the sub-prime mortgage debacle. Potential private equity buyers became squeezed for capital. Cadbury was taking its time, wanting to get the best value for shareholders, said Stitzer. In October, Cadbury decided to spin off the beverage business, which will be listed on the New York Stock Exchange as CSAB, with sales of around $5 billion.

Stitzer denied being pressured to break up the company by Peltz, who had increased his stake prior to the company announcing its separation plans.  Stitzer’s defenders say the separation was always on the cards, but that there was little point in selling the business until Cadbury Schweppes bought outright its U.S. bottling business in mid-2006. After this, the company wasted little time in courting prospective buyers.

With the cash from the U.S. drinks sale, Stitzer aims to pay down debt and to return cash to shareholders. After that, small bolt-on acquisitions are likely, while the company still stay focused on remaining a confectionary specialist.

“We are creating a receptor, to which we can intelligently add pieces,” Stitzer says.

Stitzer is seen in the U.K. as very much a spokesman for the candy industry. His latest hobby horse is that the industry has been demonised by the U.K. government as obesity among children hits epic levels. Most chocolate in the U.K. is bought by adults, he says.

“It’s about exercising judgement without emotion. No one wants an obese society. It’s a reflection of the imbalance in the equation ‘energy-in, energy-out.’ You’re demonising the ‘energy-in’ quotient. You need to stay active and balanced. The government can be overly influenced by the emotion of the subject.”

Candy, in fact, keeps him in touch with his younger side. “It’s crucial to be connected with young people and their residual chatter on the Internet,” he says, confirming that the now-defunct Wispa chocolate bar is to make a comeback thanks to popular demand generated on the Internet through petitions on the likes of YouTube.

So, was Columbia Law School useful? Oh yes. Not least, there was corporate law, along with mergers and acquisitions, contracts, intellectual property (he has several cases pending to defend the company’s distinguished purple packaging), legislation (vital for talking to governments, see obesity above). But most of all, it is Legal Methods that stays with him today.

“The common thread through my time at Columbia was a different way to think,” says Stitzer. “What was uniquely helpful was learning how to synthesize disparate fact patterns and then find an argument or a reason to support this. The ability to create logic out of what appears to be not logic.”

Thus, he says, the myriad of competitive strategies used by rivals in the confectionary industry can be distilled into a logical picture – not unlike wading through piles of legal precedents – through which he can help to steer Cadbury Schweppes on its own unique path.

And tips for any inspiring Columbia Law School graduates hoping to run a FTSE-100 company down the line?

“Be open to expanding your skill set. If you’re willing and able and flexible enough, and you want to be head of a business, you need to put in time and energy. Practice law to become functionally capable as a lawyer. Then you need leadership practice.”