Presented by: The Samuel Rubin Program for Liberty and Equality Through the Law 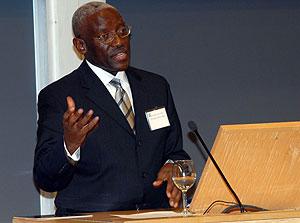 Lecture
Justice S. Sandile Ngcobo, Samuel Rubin Visiting Professor of Law
"Courts and Transformation of Society: What is Their Role?"
(Click the link to read the lecture transcript in PDF format)

Justice S. Sandile Ngcobo was born in Durban on March 1, 1953. He received his undergraduate B. Proc degree from the University of Zululand in 1975, earning distinctions in constitutional law, mercantile law and accounting. He received an LLB degree from the University of Natal, Durban in 1985. After completing an orientation course on the United States' legal system offered by the International Law Institute at the Georgetown Law Center in Washington, D.C., in 1985, he attended Harvard Law School and received an LLM degree in 1986, concentrating on constitutional law, labor law, international legal process and international human rights.

Ngcobo was the beneficiary of a scholarship from Barclays Bank between 1973 and 1976, Fulbright Scholarship in 1986 and a recipient of a Harvard Law School Human Rights Fellowship.

His career was interrupted for one year in 1976 when he was detained and held in solitary confinement following the student uprising in 1976.

Upon his release, he worked briefly as a clerk in the magistrate's office, before joining the law firm of KK Mthiyane and Company in 1978, firstly an articled clerk and then as an associate attorney. In 1982, he joined the Legal Resources Center, a public interest law firm in Durban, as a staff attorney. There he tried public-interest civil and criminal cases involving issues such as the ejection of tenants from townships; the forced removal of black communities to homelands; influx control laws; police torture and assault; wrongful detentions; labor disputes; and the eviction of black squatters.Justice S. Sandile NgcoboSamuel Rubin Visiting Professor of Law

Then, from July 1986 to July 1987, Ngcobo spent a year as the law clerk and research associate of the late Honorable A. Leon Higginbotham, Jr., the former Chief Judge of the US Court of Appeals for the Third Circuit. He also worked on research focusing on the role of law in the US and South Africa societies and, in particular, its use to perpetuate and eradicate social injustice. Ngcobo was a teaching assistant in a seminar on "Race Values and the American Legal Process" at the University of Pennsylvania, at Harvard Law School and at Stanford Law School.

From August to November 1987, Ngcobo was a visiting foreign attorney at Pepper, Hamilton & Scheetz in Philadelphia, Pennsylvania where he specialized in labor law. At the beginning of 1988, he returned to South Africa and took up the post of acting director of the Legal Aid Services Clinic of the University of Natal, Durban. From August of that year, he taught a course on race legislation, also at the University of Natal. From December 1988 to November 1989, he practiced as an advocate in Durban. But in December 1989 he returned to Pepper, Hamilton & Scheetz in Philadelphia, where he was an associate attorney. He specialized in labor and immigration law. In 1992, Ngcobo returned to South Africa and practiced as an advocate in Durban. His focus was labor and employment law, constitutional law and general practice. In 1994, he lectured part-time in constitutional litigation.

Other positions held by Ngcobo include the position of the coordinator of the Equal Opportunities Project of the Center for Socio-Legal Studies at the University of Natal, and Chairperson of the Rules Board for Courts of Law. He is a former trustee of the Dehler Foundation, a trust dedicated to the advancement of Blacks in the corporate sector, and a former trustee of the Center for Socio-Legal Studies.

In February 1999, the University of Cape Town made him an honorary professor of law. Ngcobo has published many papers on topics such as delivery of justice, the Truth and Reconciliation Commission, housing segregation and gender equality. In 2001, he was a Visiting Scholar at New York Law School. He is a member of the Yale Law School Seminar on Global Constitutionalism, and is currently the Samuel Rubin Visiting Professor of Law at Columbia Law School.

He and his wife, Zandile, have three children: a daughter, Nokwanda, and two sons, Ayanda and Manqoba.

>HISTORY OF THE RUBIN LECTURE
The Samuel Rubin Lecture is sponsored by the Samuel Rubin Program for the Advancement of Liberty and Equality through Law.  Samuel Rubin (1901 - 78) was a Russian immigrant who made his fortune founding the Faberge Perfume Co., though politically he leaned towards the left. He established a foundation in 1959 to advance his human rights causes.

One of the Rubin Foundation projects was the creation of the Samuel Rubin Program for Liberty and Equality Through Law at CLS. It supports the lectures and a visiting professorship to address current issues in human and civil rights law. Past lectures have drawn some pretty big names in the legal/political world, including Bishop Desmond Tutu, Marian Wright Edelman (Founder of Children's Defense Fund), Deval Patrick (US Dept. of Justice), Professor Cass R. Sunstein, Margaret M. Richardson (IRS commissioner), and David Kessler (FDA commissioner).