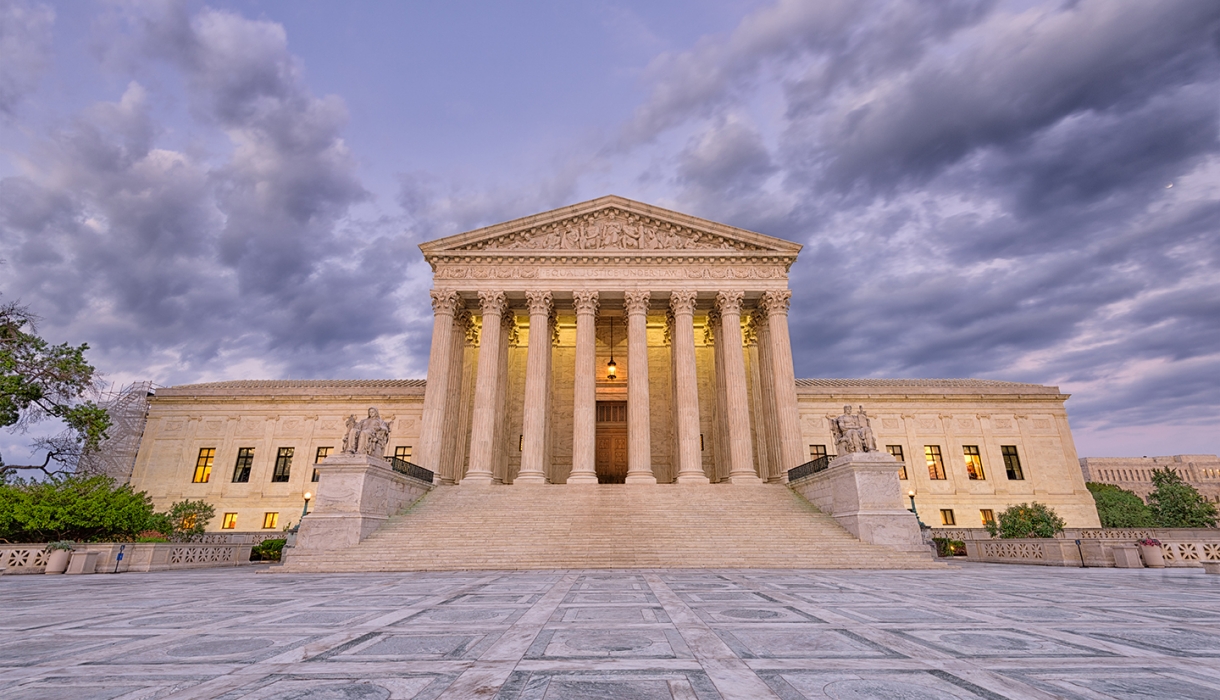 New York, June 30, 2014—Many distinguished Columbia Law School alumni have stood before the U.S. Supreme Court over the years, arguing some of the most significant cases in U.S. history. A select few even have served on the high court’s bench.

But on June 16, a cadre of Columbia Law School graduates and their guests were admitted to the court without having to file or read a single brief.
Instead, they were welcomed for an after-hours gala dinner at the invitation of Columbia Law School Dean David M. Schizer and the dean’s former boss, U.S. Supreme Court Justice Ruth Bader Ginsburg, a 1959 alumna. Dean Schizer clerked for Justice Ginsburg in the 1994-1995 term, shortly after graduating from law school.
June is a busy month for the court, as the justices and their clerks race to issue opinions in pending cases before the session concludes. But Justice Ginsburg took time from her demanding schedule to co-host the evening and celebrate the legacy of Columbia Law School.
Many of the Law School’s alumni leaders attended, including former Department of the Treasury General Counsel George W. Madison ’80 and several members of the Columbia Law School Dean’s Council: famed plaintiffs’ attorney Robert L. Lieff ’61; bankruptcy powerhouse Harvey R. Miller ’59; real estate icon Richard Paul Richman ’72; New York State Supreme Court Associate Justice and Columbia University Trustee Rolando T. Acosta ’82; and former international general counsel of Goldman Sachs David J. Greenwald ’83, among many others. 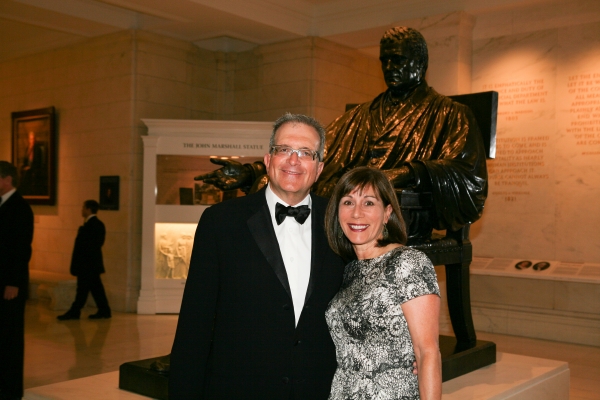 “Welcome to my workplace,” the justice told the group of about 100, taking the podium to deliver her remarks in the iconic Great Hall after Dean Schizer made a brief introduction and thanked her for her hospitality and service on the court. 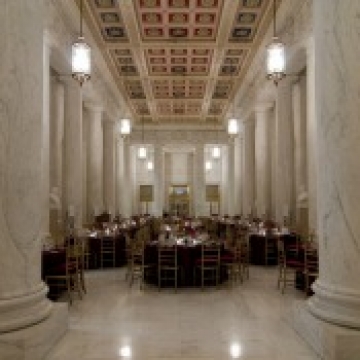 And what a workplace it is. Attendees were treated to a private viewing of the historical exhibit on the court’s main floor and a cocktail reception in the East Conference Room before dining in the Great Hall. They were met at nearly every turn by portraits or exquisitely carved busts of former Supreme Court justices, and the fabled marble columns and gleaming bronze doors added to the feeling of legal gravitas. Still, the guests kept things light, chatting as they snapped selfies in front of the likeness of John Jay, a 1764 graduate of Columbia University forerunner King’s College and the first chief justice of the nation’s high court. Others were spotted taking pictures at the entrance to the courtroom where so many landmark rulings have been handed down over the centuries.
Among the delighted attendees were Columbia Law School faculty members, as well as Gillian Lester, who will become the Law School’s 15th dean on Jan. 1, 2015. During cocktails, she had a chance to meet and mingle with alumni, and to speak privately with Justice Ginsburg.

In her remarks, the justice traced the connections between former Columbia Law School students and the court on which she sits, beginning with Jay. The list of alumni justices also includes Charles Evans Hughes, Harlan Fiske Stone (1898), and Benjamin Cardozo, who each sat in the early 1900s during what she called “the golden age of Columbians on the court.” The other justices who served on the court after studying at Columbia were Samuel Blatchford, Stanley Forman Reed (1908), and William O. Douglas ’25, the longest-serving justice. Justice Ginsburg is the first female justice from Columbia Law School. She took the bench in 1993 after being appointed by President Bill Clinton.

The event also celebrated the leadership of the alumni in attendance, which has made it possible for the Law School to: strengthen support for students interested in government and public interest jobs; reduce the student-faculty ratio to the lowest it has ever been by adding 43 faculty members; build additional office and classroom space; and launch a host of new curricular innovations. 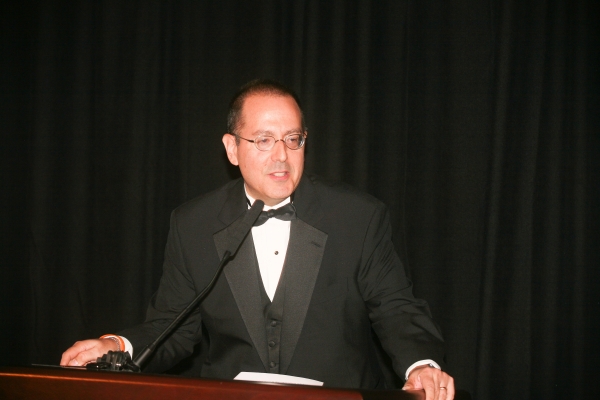 “Your dedication to our school has allowed us to do much more than we could before,” Dean Schizer, the Lucy G. Moses Professor of Law and the Harvey R. Miller Professor of Law and Economics, told guests. “Tonight is our way of saying thank you for everything you do for Columbia Law School.”