“Today we should celebrate not only what our Law School has achieved in the past 150 years, but what we will achieve in the next 150 years and beyond,” said Dean David M. Schizer in his welcome to the two hundred alumni, faculty, Columbia University President Lee C. Bollinger ’71 and current students gathered in the Court’s Great Hall.

Schizer recalled the defining roles that Columbia Law School professors and alumni have played in addressing important questions about the balance between national security and personal liberty; racial justice, federalism and separation of powers; and the role of public and private institutions in a global economy.

“There has been so much progress in 150 years – the world is more prosperous and free than anyone imagined it could be – but, at the same time, so many difficult problems are still with us,” Schizer said. “It is worth reflecting on how central our Law School has been in grappling with the great issues of our time.”

Justice Ginsburg apologized for the acoustics of the marble Great Hall where the dinner was held, with a familiarity only a Justice could have with the space.
Her speech was an intimate reminiscence of her years at Columbia Law School and their life-changing effect.
She said that at her graduation, her exuberant four-year-old daughter yelled, “That’s my mommy!” from a balcony as she received her diploma from Dean Warren. That daughter is Jane Ginsburg, today the Morton L. Janklow Professor of Literary and Artistic Property at the Law School. They are the first mother and daughter to have taught on the same faculty at any U.S. law school.
“Legal education is a shared adventure for students, teachers, and alumni. For all of my days, I expect to take part in that adventure and to see it flourish at Columbia Law School,” she said.
“Without the instruction and caring of teachers, friends, and supporters of Columbia University and its great Law School, I would not have the good job I hold today,” Justice Ginsburg said. She recalled that her nomination to the Supreme Court was the direct result of a letter that Dean Michael Sovern wrote to New York Senator Daniel Patrick Moynihan, whom President Clinton had asked for a recommendation.

Dean Schizer, who clerked for Justice Ginsburg in the 1994-1995 term, fondly recalled working with her at the Supreme Court.

“The justice sets a very special tone in chambers that combines intellectual rigor with personal warmth,” Schizer said. “It is a tone that I have tried to emulate with my students.”

The Supreme Court dinner is one of a series of worldwide events to mark Columbia Law School’s 150th anniversary. The Law School began the year with alumni receptions in Hong Kong, Shanghai, Beijing and Tokyo and last week honored the six living former deans of Columbia Law School and alumnus H. F. (Gerry) Lenfest ’58 at its annual Winter Luncheon. 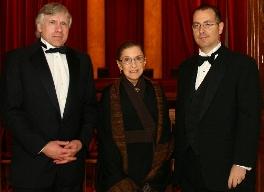 After 150 years, Columbia Law School remains at the forefront of legal education and of the law in a global society. Columbia Law School joins traditional strengths in international and comparative law, constitutional law, administrative law, business law and human rights law with pioneering work in the areas of intellectual property, digital technology, sexuality and gender, and criminal law. The Law School offers J.D., J.S.D. and LL.M. degree programs to a diverse student body.