Students Go Behind the Scenes at U.S. Supreme Court and Justice Department

New York, Jan. 12, 2012—Picture this: After attending an oral argument at the U.S. Supreme Court, you go behind closed doors for personal visits with Associate Justice Elena Kagan and Solicitor General Donald B. Verrilli Jr. ’83. It sounds like a fantasy, but that’s how 19 Columbia Law School students spent their day on Nov. 7.

The students who took the trip were enrolled in International Lawyering for the U.S. Government, a fall 2011 seminar taught by Professor Sarah H. Cleveland, the Louis Henkin Professor of Human and Constitutional Rights. Cleveland recently completed a two-year term at the State Department as the counselor on international law. 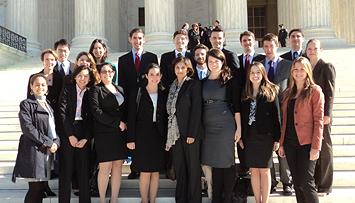 Professor Sarah Cleveland (far left, middle row) and students at the U.S. Supreme Court on Nov. 7.
“For any aspiring litigator to have the opportunity to attend a Supreme Court argument and then meet with one of the justices and the solicitor general—it was an amazing and memorable part of my legal education,” said Jeff Izant ’13.
The Court visit was one of the benefits to Columbia Law School students of Cleveland’s recent government service.
Case posed a separation of powers question
The case before the Court on the day the students visited was Zivotofsky v. Clinton, a presidential powers dispute dealing with whether the executive branch has the exclusive constitutional authority to recognize foreign sovereigns, as well as the question of whether the Court has the power to rule on such a question.
Solicitor General Verrilli represented the government’s position, which is that the executive branch has the exclusive power to recognize the sovereignty of a state. After many years as one of the nation’s top trial attorneys, who received national honors for his public service, Verrilli served in the Obama administration’s Justice Department as an associate U.S. deputy attorney general and then as deputy counsel to the president in the White House, before being named solicitor general. While a student at Columbia Law School, Verrilli was a James Kent Scholar and served as editor-in-chief of the Columbia Law Review.
The plaintiff’s lawyer, Nathan Lewin, teaches courses on religion and the Supreme Court at Columbia Law School and is a veteran appellate litigator.
The class left the argument with the general sense that the Court was unlikely to hold that the case presented a nonjusticiable political question. The Court, Cleveland said, seemed inclined to rule that it is unconstitutional for Congress to infringe on the president’s power to recognize sovereignty.
Rare informal, educational meetings with Kagan and Verrilli
After seeing the Supreme Court in action, the students received a rare introduction to Associate Justice Kagan, with whom Cleveland had worked on litigation issues when Kagan was solicitor general. According to students, the justice explained some of the inner workings of the Court, such as the law clerks’ contribution, how the justices communicate, and the good relations among the justices.
The group next visited the Department of Justice, where they met with both Solicitor General Verrilli and Ginger Anders ’02, an assistant in Verrilli’s office. Anders explained the operation of the solicitor general’s office and how the office works with the various executive agencies.
The solicitor general “was extremely open and forthcoming in terms of explaining how he approached the preparation of the brief, and his thoughts on having to rebut the plaintiff’s arguments,” recalled Alasdair Shaw ’12, a native of Scotland who is pursuing an LL.M. at the Law School while enrolled in a master’s program at the University of Amsterdam.
The take-home point for many students was Verrilli’s consciousness that he performs a dual role—serving the best interests of his client, the U.S. government, as well as the best interests of the Court.
Looking back on the international lawyering seminar as a whole, students gave the course high marks, noting that Cleveland brought in a series of high-profile speakers and shared fresh insights as she analyzed her recent stint in government.
One of the distinguished classroom visitors, State Department Legal Adviser Harold Koh, spoke about what it was like to have the U.S. government as a client—a domestic client within the international realm—and left the students thinking about the importance of finding solutions to problems, not just carrying on the status quo.
“Understanding the tasks you have to overcome in that kind of job has given me the inspiration to do governmental work back in the U.K.,” said Shaw.
More than one student who took the seminar noted the impact of the professor’s experience and reputation.
“Professor Cleveland is part of why I came to Columbia,” said Kristin Olson ’12. “It has truly been a privilege to study with her.”