New York, May 7, 2012—Robert J. Jackson Jr., a prominent expert on executive compensation and corporate governance, has been awarded the 2012 Willis L.M. Reese Prize for Excellence in Teaching, an annual acknowledgment of gifted teaching that is awarded by the graduating classes. Jackson, who was selected in a vote involving both J.D. and LL.M. candidates, will speak at Columbia Law School’s graduation ceremony on May 17.

Jackson, who earned the honor less than two years after joining the faculty, has quickly established a track record of influential scholarship and compelling new coursework that draws on his experience in the public and private sectors. Since his arrival at the Law School, Jackson has launched an investment banking class that trains students in the advanced corporate finance techniques they will confront in their legal practice, as well as a new course on the economics and regulation of executive compensation.

Jackson brings a unique insider’s expertise to his coursework. He deferred his faculty appointment for the 2009–2010 academic year so that he could join the Treasury Department during the financial crisis. At Treasury, he served with “pay czar” Kenneth R. Feinberg, helping to establish executive pay rules for corporations such as AIG, Citigroup, and General Motors after they were bailed out by the government. He also developed the Obama administration proposals on executive compensation and corporate governance that became part of the Dodd-Frank financial reform law. When he arrived at the Law School the following year, Jackson brought new insights from his time in government and was joined in his lectures by Treasury officials responsible for the government’s critical decisions during the financial crisis. 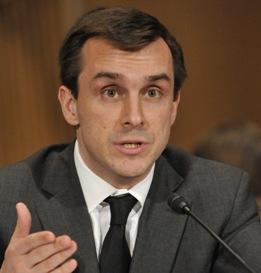 Students appreciate Jackson’s talent in making complex corporate law concepts accessible—as well as his work ethic inside and outside the classroom. “What makes Professor Jackson a truly amazing professor is that he works so hard to help students understand the material,” said Priya Merrill ’12, a student in Jackson’s courses on corporations and investment banking. “He pushes students to challenge themselves, but gives them the tools to get there. It’s such a rewarding feeling for students at the end of a semester when you can look back, realize how much you’ve learned, and say with confidence that you’ve truly mastered the topic.”

Jackson’s scholarship, which focuses on the relationship between executive pay and performance, has been the subject of rulemaking by several federal agencies, including the Federal Reserve and the Securities and Exchange Commission. He has testified before Congress on bankers’ compensation, and his work has been referenced widely in the media, including by The New York Times, The Economist, The Wall Street Journal, and National Public Radio. Jackson’s recent scholarship includes “Private Equity and Executive Compensation” (forthcoming); “Stock Unloading and Banker Incentives” (Columbia Law Review); and “Corporate Political Speech: Who Decides?” (with Lucian A. Bebchuk) (Harvard Law Review).

Prior to joining the Treasury Department, Jackson practiced law at Wachtell, Lipton, Rosen & Katz, where he specialized in executive compensation and corporate governance. Before that, he worked in investment banking and as a consultant to financial institutions. He served as a law clerk to Judge Amalya L. Kearse of the U.S. Court of Appeals for the Second Circuit, and as articles co-chair of the Harvard Law Review. He earned a B.A. in philosophy from the University of Pennsylvania and Pembroke College, Oxford; a B.S. in economics and an M.B.A. from The Wharton School; an M.P.P. from the John F. Kennedy School of Government; and a J.D. from Harvard Law School.

As Columbia Law School’s only teaching award, the Reese Prize acknowledges a full-time professor who demonstrates the commitment to teaching that Professor Willis Reese exemplified at the Law School. The graduating J.D. and LL.M. classes nominate each year’s recipient in a selection process overseen by a committee made up of Dean David Schizer, Dean of Students Michelle Greenberg-Kobrin, past recipients of the Reese Prize, and students on the Graduation Committee.