Columbia Law School Professor Bert I. Huang has long taught his students the so-called Trolley Problem, a well-known moral dilemma: If an out-of-control train is traveling toward five people standing on a track, should a bystander divert the train to another set of tracks where only one person is standing, or do nothing?

But it was only recently, when a new book on the topic was published by leading moral philosopher Frances Kamm, that Huang began to wonder why there has been so little research about one fundamental question: Can our moral judgments about these kinds of tragic choices be influenced by the presence of the law?

“To those of us who are immersed in law and policy, it may seem obvious that laws aren’t just there to tell people what to do—sometimes the law also aspires to shape what people think is morally right,” he said. “But can the law really move the moral needle? If so, when and how?”

Huang’s research, which uses survey experiments to see if people’s moral intuitions about the Trolley Problem can be influenced by the law, is under way in the United States and will extend to populations in other countries and legal systems. “How fascinating it would be to see if law’s influence on moral thinking varies across geography and culture,” he said.

In designing his experiments, Huang was able to assemble a highly skilled research team from within Columbia Law School—a trio of students with directly relevant backgrounds: Arisa Akashi ’17, who majored in cognitive neuroscience; Bram Schumer ’17, a psychology major who had stints working at Apple and Google; and Yuko Sin ’17, who studied moral philosophy as an undergraduate.

“These smart, talented students were an invaluable sounding board for me,” Huang said. “Having research assistants who are fluent in all those areas made the process more effective and also more fun.” 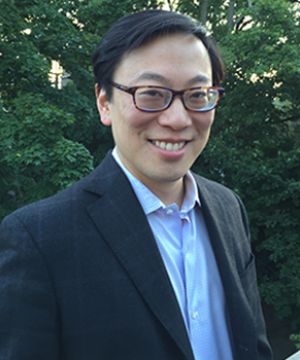 After conducting randomized surveys of 1,400 subjects living in the United States, Huang began to analyze the results. The data, published in the December issue of the Harvard Law Review, was clear: The law can influence people’s moral thinking about the Trolley Problem. When people were told that diverting the train was legally justified, and, thus, the bystander would not be held liable for doing so, only 4 percent said that the action would be morally prohibited. When they were told turning the train was a crime and that the bystander would be held liable, that number jumped to 16 percent.

Professional duty can also influence people’s moral thinking. When the bystander is an engineer who works for the railroad, 26 percent said turning the train would be morally prohibited if the engineer would be prosecuted for a crime, while only 2 percent gave that answer if the engineer was required to try to minimize casualties and would be held legally responsible if he did not.

These findings raise questions about how to understand the relationship between law and morality. Sometimes “there’s a virtue to aligning the law with what people think is morally good or bad,” Akashi noted. But these data suggest that such a task may be complicated by feedback loops. As Huang’s paper puts it: “What if the moral intuitions we can observe have already been shaped by people’s impressions, however vague or subconscious, about what the law expects?”

Recently, there has been a jump in media coverage and public awareness of the Trolley Problem—the once purely academic hypothetical has become a popular internet meme—in part because of its uncanny resemblance to decisions that self-driving cars may have to make. For example, should such a car be programmed to sacrifice its passenger to save other drivers or pedestrians? Or to save its passenger at all costs?

“Here’s a thought experiment that once felt so abstract—and yet now it seems to be coming to life,” Huang said.

For the students—who all plan to join law firms after they graduate—part of the appeal of the project was the value of experimental research.

“It’s hard to figure out why we have these intuitions without running experiments and changing the variables,” Sin said.

Schumer agreed. “I liked seeing how the survey design subtly changed over time to probe different questions we were interested in, and how small changes influenced people’s responses,” Schumer said.

Huang emphasizes that the findings so far point to the need for more research on the possible pathways of law’s influence.

“These findings highlight the potential for the law to shape public consciousness, but more importantly, they also highlight how much more we have yet to learn about how the law’s influence might work,” he said.

In other words, the law’s halo is ripe for further empirical exploration.

“What are the origins and the limits of the law’s halo?” Huang asked. “Is it enduring or is it ephemeral? Who sees it and who doesn’t? When is it brighter, or more faint?”