Soon after President Trump signed his “travel ban” order this past January, Ryan Hayward ’17 got a request from an old college friend: Would he help launch a blog focused on whether the president is fulfilling his obligation under Article II of the Constitution to “take care” that the laws be faithfully executed? Hayward didn’t hesitate to say yes.

Trump’s executive order, which temporarily suspended immigration from seven Muslim-majority countries, was “universally, across the spectrum recognized as outside the bounds of not only decency but the law,” Hayward said. (After one court immediately issued an order halting it, a revised executive order was issued, which has been challenged in multiple courts.

The blog, Take Care, was launched in March by Hayward’s friend and Harvard Law School graduate Joshua Matz. Hayward and four other Columbia Law School students and recent graduates have signed on to write daily updates, which include the aggregation of legal analysis from around the web and original content.

According to Matz, Take Care “offers timely, accessible, and useful legal analysis of the presidency and the administration—generally, but not exclusively, from a progressive perspective.”

Hayward, pictured below, said the blog isn’t so much anti-Trump as it is “pro-preserving the rule of law.” He noted that the traditional route for legal commentary is to publish pieces in law reviews, but he said the turnaround time for such publications was too slow in the Trump era. 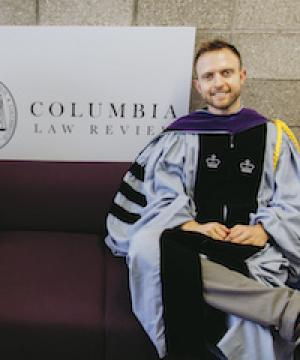 “It’s kind of a unique situation where there is a lot of legal commentary that is needed on a weekly basis,” he said.

Matz agreed that the quantity of presidential actions with legal implications was a major reason for the blog’s creation.

“There were too many, happening too quickly,” he said. “It seemed clear that new resources were needed to keep pace with him.”

While there are many successful legal blogs, most focus on a narrow aspect of the law. For example, SCOTUSblog (where Matz once worked) is dedicated to covering the U.S. Supreme Court. Just Security, as its name suggests, follows developments in national security law and policy.

Take Care, meanwhile, has as its focus the entirety of the Trump administration. So far, Hayward, who worked at Google and founded a startup before coming to Columbia Law School, has written about the likelihood of a “Muslim registry.” Julia Sherman ’17—who, in her role as editor-in-chief of the Columbia Human Rights Law Review, helped launch the Trump Human Rights Tracker—wrote about international human rights law under Trump. Greene’s most recent piece considers whether lying could be grounds for impeachment under the 25th Amendment. And Strauss took on Trump’s appointments—or lack thereof, which he suggested might reflect the president’s “commitment to deconstruct the administrative state.”

Other contributors include noted constitutional law scholars such as Harvard Law School professor Laurence H. Tribe and Erwin Chemerinsky from the University of California, Irvine, as well as former acting U.S. Solicitor General Walter Dellinger, among others.

The blog is starting to get some recognition. It was written up in The Washington Post’s Volokh Conspiracy blog, and Roberta A. Kaplan ’91, the attorney who won the U.S. Supreme Court case that dismantled the federal Defense of Marriage Act, has retweeted its posts.

“This is a good resource for people who are interested in an overview of what the administration is proposing right now and what sorts of laws are being enacted and enforced,” said Tara Schwartz ’17, who hopes to use research she conducted on Riker’s Island while at Columbia Law School to write about federal oversight of police departments (a practice Attorney General Jeff Sessions has decided to review).

Strauss said he agreed with Hayward and Matz that there was a need for this blog at this time. But he also said there’s always a demand for good analyses of executive branch power.

“At the moment, Trump is the one who is or isn’t taking care,” he said, “but the question, ‘What does that obligation mean?’ is a question that has animated American politics and American administrative law for a long time.”

The Trump Administration and the Rule of Law