Columbia Law School's Immigrant Rights Clinic Files Amicus Brief in Federal Court on Behalf of Detained Mothers and Their Children
New York, March 8, 2016—The Columbia Law School Immigrants’ Rights Clinic filed an amicus brief urging the Ninth Circuit Court of Appeals to end the detention of asylum-seeking mothers and children held at three federal detention facilities, two in Texas and one in Pennsylvania.  The plea to the federal court of appeals, filed Feb. 23, is part of the clinic’s ongoing advocacy in the fight to end the detention of refugee families.
The clinic joined with several other advocacy groups including the American Civil Liberties Union, the Catholic Legal Immigration Network, Inc., and the American Immigration Lawyers Association, to urge the Ninth Circuit to not reverse protections provided by the landmark 1997 Flores decision. That settlement requires the government to hold children in the least-restrictive settings appropriate to their ages and needs, in places licensed to care for children, and to release them without needless delay to their parents or other adult relatives whenever possible. 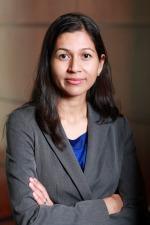 “Our law students are helping to save the lives of the most vulnerable refugees among us,” said Professor Elora Mukherjee, who heads the clinic. “These children and mothers have suffered rape, incest, severe beatings, torture, and loved ones being murdered.” Under Mukherjee’s supervision, Columbia Law students were the first to provide pro bono legal representation to mothers and children detained in Dilley, Texas, beginning in January 2015, just weeks after the federal detention center opened.
“The government has failed to abide by its legal obligations under Flores, which requires these children to be released from detention without unnecessary delay,” Mukherjee said. “Our law students are fighting for their freedom.”
Flores was the first nationwide settlement agreement to establish guidelines for the treatment of children in the immigration detention system. The case originated with Jenny Lisette Flores, a 15-year-old child from El Salvador who came to the United States in 1985.
Under the settlement, minors may not be detained by immigration authorities in secure facilities for more than 72 hours, except in exceptional circumstances. With an increase in apprehensions of immigrant minors in 2014, DHS effectively ceased compliance with several key provisions of the Flores settlement by holding children for the first 72 hours or longer in “hieleras” or icebox facilities, and holding minors apprehended with mothers (but not if apprehended alone, or with fathers) indefinitely, despite the availability of other close family members prepared to care for the children if released from custody.
In the brief, the organizations supporting the injunction take issue with the government’s claim that the increased influx of immigrant children and families has made the changes necessary.
The government has “urged this Court to reverse the district court’s injunction, and to disregard the plain terms of the Settlement Agreement, so that they can subject accompanied immigrant children and their mothers seeking protection to either expedited removal or reinstatement of removal proceedings,” the brief states. “According to the Government, the district court’s limitations on detention for Flores class members and their mothers prevent the Government from utilizing such summary proceedings. These concerns are overstated and not persuasive.”
Many were held in facilities such as Dilley, where clinic members, appalled by the conditions they observed there—within a week of their trip—wrote a 10,000-word white paper about the problems at Dilley. This report was circulated to several hundred immigrants’ rights advocates and lawyers, and urged a coordinated nationwide pro bono response to the crisis of family detention.
Over the past 13 months, Mukherjee and more than 40 of her students have visited Dilley multiple times to provide pro bono representation to several hundred asylum-seeking mothers and children, some as young as 2 years old—and helped to secure their release. While in Dilley, the Columbia team partners with the CARA Family Detention Pro Bono Project.
Clinic students each handle significant case responsibilities, visit immigration detention facilities on a regular basis, and make at least one appearance in immigration court during a semester. With an emphasis on client-centered lawyering, students work with clients from around the world.
The clinic also works with national and local organizations to further immigrants’ rights issues. Students collaborate on projects involving regulatory and legislative reform, impact litigation, public education, grassroots advocacy, media work, strategic planning, and related matters.
The brief is available here.