Ibrahim Diallo ’20 led the effort to have all incoming students read “Devil in the Grove,” a Pulitzer Prize-winning book about a landmark 1940s civil rights case—and then invited the author to campus to discuss its relevance for today.

For the first time, incoming Columbia Law School students were asked to read the same book before arriving on campus this fall. Devil in the Grove: Thurgood Marshall, the Groveland Boys, and the Dawn of a New America tells the story of the civil rights champion’s defense of four African-American men falsely charged with rape in 1940s Florida. Author Gilbert King, who won a Pulitzer Prize in 2013 for the work, came to campus on September 17 to discuss the book with Professor Olatunde Johnson.

Perhaps no one was more excited about the event than Ibrahim Diallo ’20. A former financial analyst at J.P. Morgan, who moved to New York from Guinea at age 13, Diallo led the effort to create the first shared summer reading experience for 1Ls. Here, Diallo explains how the event came together and the special connection that the book has to Columbia Law School. 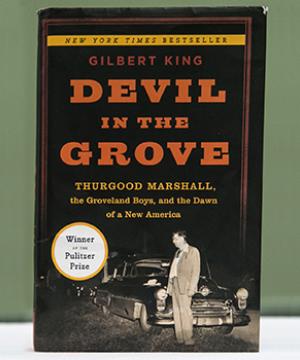 The inspiration for the event

During the summer before I started law school, I came across a Q&A where Professor Olatunde Johnson was asked what she was reading, and she responded, Devil in the Grove. Her description of the book caught my attention, and I decided to read it. I was inspired by the stories of the lawyers in the book—their zealous advocacy as well as their pragmatic approach to securing justice for their clients.

After arriving on campus in the fall of 2017, I started talking to some classmates about the book and how I thought it should be suggested reading for anyone going to law school. I recruited a few friends, and we decided to organize a summer reading for the class of 2021. To make this happen, I worked with Tessa Baizer, Fatima Bishtawi, Tiffani Burgess, Nicandro Iannacci, Mary Marshall and Alli Langley—all class of 2020.

After reading Devil in Grove, I did some research and learned that the book had a deep connection to Columbia Law School. One of the main attorneys who worked on the Groveland Four case, was the late Jack Greenberg ’48, a Columbia Law School graduate who also was a member of the faculty for more than 50 years. I also learned that the Law School had a historic connection with the NAACP Legal Defense Fund, the organization that represented the Groveland Four. Armed with this information, I wrote a letter to Gilbert King and kindly asked that he join us for a book discussion. I was pleasantly surprised when I received a response from his team expressing interest.

Takeaways from the discussion

As you can imagine, it was a bit surreal for me to watch Professor Johnson and Gilbert King discuss the very timely issues raised in the book—issues of race and the criminal justice system, white supremacy, and racial and economic justice. Our goal for the summer reading was to have incoming students think hard about the issues raised in the book and the role an attorney can play in addressing those issues.

In the face of grave physical danger to themselves and their families, the lawyers representing the Groveland Four were unwavering in their belief that black lives mattered. They were creative, practical, and relentless in their pursuit of justice. They refused to accept that there was “nothing the law can do.” It was not glamorous work, and it was not comfortable work. But they were driven by passion and their love for people. That commitment is inspiring.

Being an advocate for others is the reason why I want to be a lawyer, and I suspect that there are many people who attend law school for the same reason. Through this summer reading, we hoped to start a conversation before students arrived on campus and continue it through their time at the Law School. We hope the reading program continues next year and beyond.