New York, April 6, 2012—Patricia O’Brien, Under-Secretary-General of the United Nations for Legal Affairs, spoke to students and faculty at Columbia Law School about measures the U.N. has taken to prevent crimes against humanity from happening—or escalating—especially during 2011’s “Arab Spring.”

Her talk was part of the spring speaker series of the Law School’s Center on Global Governance. O’Brien, a native of Ireland, was appointed to her position by U.N. Secretary-General Ban Ki-moon in August 2008. She previously was Legal Adviser to the Department of Foreign Affairs of Ireland. There, she dealt with Irish foreign policy, public international law, human rights law, and European Union Law. 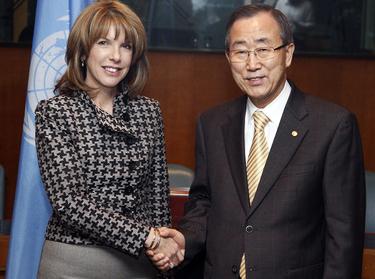 Since joining the organization U.N.,” said O’Brien, “it has become clear to me that international law—and the role of the U.N. as its champion—is central to the secretary-general and his team.”

She said her office has been instrumental in making the Responsibility to Protect (R2P) doctrine operational. R2P, endorsed by the U.N. in 2005, is a set of principles to guide the international community if a state fails to protect its own population.

“2011 was the year in which R2P really came of age and was tested like never before,” said O’Brien. She described situations in which the concept of R2P has been invoked in Egypt, Tunisia, Yemen, Libya, and Syria. Regarding Libya, she pointed to the Security Council’s first full-fledged R2P resolutions. “It should be remembered that Quaddafi’s forces were threatening to annihilate those Libyans who were challenging his 42-year grip on power,” she said.

“From my perspective, R2P has had an enormously positive effect, as opposed to what otherwise would have been.” Yet, she added, the U.N. has been extremely challenged by the grave situation in Syria, where more than 7,500 anti-government protesters—including women and children—have been killed since March 2011.

O’Brien also spoke highly of the international criminal tribunals that her office helped establish in the 1990s and early 2000s. “Before the establishment of these accountability mechanisms, impunity was viewed by some perpetrators . . . as a very likely outcome,” she said.. “This is no longer the case. Significantly, in the case of the international tribunal for the former Yugoslavia, all 161 indictees have now been brought before the tribunal . . .  This record is remarkable.”

Columbia Law School plays a key role in preparing the next generation of international lawyers, O’Brien said, by providing a “deep and rich education” in a broad range of international law topics. “We have a number of wonderful Columbia graduates working in the Office of Legal Affairs,” such as her current deputy Stephen Mathias ’80, assistant secretary-general for legal affairs, she added. “I hope that many of you will consider carrying on this tradition and find ways to contribute to the positive developments of international law,” she told students.