New York, April 23, 2015—Professor Peter L. Strauss, a leading expert on administrative law, has spent his career parsing the intricacies of how the American government can function at its best and most transparent state. While his area of study focuses keenly on domestic issues, Strauss’ influence in the field has reached far beyond the borders of the United States.

This past March, Strauss, the Betts Professor of Law, spent four weeks lecturing and teaching at Paris 1 Law School as part of the Columbia Alliance with Panthéon-Sorbonne University. During that time, he presented an article that compared secretive practices and judicial response of the McCarthy era to how the government deals with secrecy now. 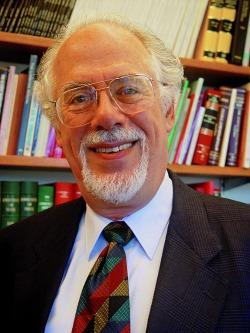 Strauss found “rather pessimistically, that today’s courts are much more willing to repress information that might be valuable to the accused, or the private party involved in the dealings with the government, than they were back then.” He was alarmed to find how little a person turned away at the boarding gate for being on TSA’s no-fly list can find out about her reasons for being there, how scant are her opportunities to seek correction, and then, how uninformative is the agency’s response. “Here I am teaching about the rule of law and this is several steps away from that,” he added.
In addition to his recent work in Paris, Strauss was also invited this past summer to speak at prestigious conferences at Beida University in Beijing and at the National Taiwan University in Taipei. Strauss presented a descriptive account of how the U.S. has made changes to federal administrative law, starting with Professor Walter Gellhorn ’31. He noted that the conference in China was a continuation of work fostered by Stanley Lubman ’58, a pioneer of Chinese legal studies in America.
“Columbia has had a major influence in producing a rule of law culture in China,” Strauss said.
The professor’s insight continues to find major footholds in American academic institutions, as well. This past November, Case Western Reserve University School of Law invited him to speak on the role of the president in administrative law, a presentation that built on his 2008 article “Overseer or ‘The Decider’? The President in Administrative Law,” which won the inaugural Richard Cudahy prize from the American Constitution Society. This month, Strauss participated in the Stanford Law School conference “The Constitution and the Administrative State: Past, Present, and Future.”
On April 24, Columbia Law School will also honor Strauss at the Harold Leventhal Memorial Symposium. At the celebration, top academics will hold panel discussions reflecting and building on the professor’s influential and extensive scholarly work, and panelists’ contributions from the event will be published in the November 2015 issue of the Columbia Law Review.