Special Jurors Hear Jerome Michael Trial Competition
SPECIAL JURORS HEAR JEROME MICHAEL TRIAL COMPETITION
A case involving a broken contract was heard by a juries consisting of high school students who themselves had competed in mock trials.
By JAMES VESCOVI
April 3, 2008 – NEW YORK -- The annual Jerome Michael Jury Trial had added to its proceedings unusual elements this year: not only were there two juries, but they were composed of 20 students from New Jersey’s Belleville High School.
The seniors and juniors have been enrolled in their school’s Law Related Education Program, an after-school program that introduces basic principles and ideas of law, such as how constitutional, statutory, case and administrative laws are created and how cases are tried.  Wanting to expose his class to a mock trial with law school students who had spent long hours researching their case, Program Director Jerry Ross made contact with law school administrators, who set the field trip up with the aid of Professor Philip Genty. The students themselves were no strangers to mock trials, having competed in two this year in Princeton and Newark.
After being bused in from Belleville, the high schoolers ate a quick supper and took a tour of the Law School. They then entered Room 102 of Greene Hall to hear the case, Quinlain v. Kane, which involved a commercial contract dispute between the owner of an electronics business and a business broker.   Robert Glunt ’08 and Chris Hogan ’08 argued for the plaintiff, while Andrew Perito ’08 and Nina Yadava ’08 represented the defendant. Presiding over the case was the Honorable Judge Alvin Hellerstein ’56, of the Southern District of New York.

Judge Alvin Hellerstein '56 presided over this year's
Jerome Michael Trial Competition.
Robert Glunt won the Jerome Michael Cup, Columbia’s highest trial advocacy honor. The recipient is chosen by the judge who presides over the final trial. Judge Hellerstein initially resisted making a decision about the award because of the excellent performances of all the finalists.
Unlike real juries, these two had the opportunity to sit through pre-trial motions. Between the pre-trial activities and the case itself, the students devoured several pizzas provided by the Law School for trial participants, which provided much needed sustenance for the two-hour trial that lay before them.
Judge Hellerstein kept the proceedings and closing arguments moving at a brisk pace to allow the young jurors ample time to render a decision and still make their curfew.  After Hellerstein explained the law that was to be applied in the case, the students assembled in two jury groups in the hallway and debated passionately for about 20 minutes.
The verdicts rendered a split decision, one jury deciding for the plaintiff, the other for the defendant. 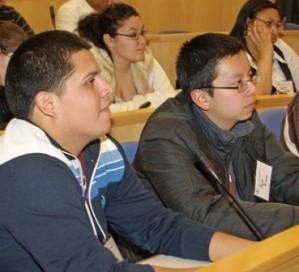 Students from Belleville High School in New Jersey sit as jurors during oral arguments in this year's Jerome Michael Trial Competition at CLS.
“The students added a whole new dimension of enthusiasm and energy to the proceedings,” said Genty, who oversees the Law School’s moot court programs. He has asked the jurors to memorialize their thoughts from their deliberations and send them to him. The student coordinator for this year’s case was Justin Carroll ‘08. 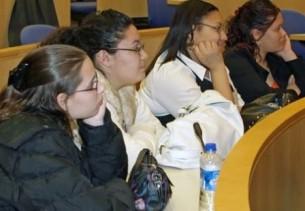 Belleville High students listen to oral arguments during the
Jerome Michael competition.
The Jerome Michael Moot Court Cup for Advocacy was awarded to Andrew Perito.
The competition is open to all second- and third-year Columbia Law students. The final four participants advanced from a preliminary round in the fall semester and a qualifying round in the spring semester to be in the final competition.