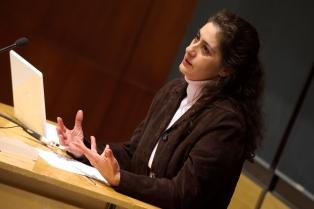 Jessica Lenahan, Suing the U.S. for Human Rights Violations in the Deaths of Her 3 Young Daughters, Visits Columbia Law School

By Erin St. John Kelly
March 7, 2008 (NEW YORK) – Jessica Lenahan, whose three daughters were killed when local Colorado police did not enforce a restraining order against her former husband, visited Columbia Law School yesterday and talked to students about her experience in the aftermath and the resulting case she brought before the Inter-American Commission on Human Rights with the Law School’s help.
“It’s not about me personally, it’s not about men or women but about society and about human rights,” Lenahan said.
Aided by Columbia Law School Human Rights Fellow Caroline Bettinger-López, Lenahan filed Jessica Ruth Gonzales v. United States of America, , in 2005, the first time an individual complaint by a victim of domestic violence has been brought against the United States for international human rights violations.
Lenahan met with the 2008 Human Rights Clinic student team that helps represent her and addressed the Gender and Human Rights and the Human Rights Clinic classes that Bettinger-López teaches at the School of International and Public Affairs (SIPA) and Law School.
With her hands clasped in front of her face, Lenahan sat under a large screen that played the March 2005, “60 Minutes” news story about her case. She described to the rapt room the difficult process of transitioning from victim to survivor. “You can heal from physical abuse. But emotional abuse strips you of any pride and the ability to go forward, and that’s been a big struggle for me,” she said.
In 1999, Jessica Lenahan, then Gonzales, filed a lawsuit against the Castle Rock, Colorado Police Department for failing to respond to her cries for help after her husband abducted the children, despite the fact that she had an order of protection against him. In June 2005, the U.S. Supreme Court found that Ms. Gonzales had no constitutional right to police enforcement of her restraining order. “She was left with no remedy for this tragedy,” said Bettinger-López.
In December 2005, Lenahan filed a petition with the Inter-American Commission, which claimed that the inaction of the police and the Supreme Court’s rejection of her claims violated her human rights. “I was revictimized because I didn’t get to tell my story. I had no voice,” Lenahan said.
In October 2007, the Inter-American Commission declared it would hear the case. “It’s the state’s duty to protect and to compensate, which are the most underdeveloped rights in the international community. We are seeking to develop them further in the Gonzales case,” Bettinger- López told the class.
Lenahan has plans beyond the Inter-American Commission decision. She said she wants to erect healing centers to address the “basic needs of victims that seem to slip under the cracks.” She envisions a minimum of two years of help for domestic violence victims.
Lenahan also works regularly with police forces, district attorneys, nurses and doctors to help them identify domestic violence,” helping victims turn into survivors.” She closed her comments hoping to inspire the class to personal political action. “I use my voice,” she said, “and it’s pretty liberating.”
Lenahan’s representation team members are: Caroline Bettinger-López, Professor Peter Rosenblum and students Rachel Barish, Elizabeth Howell, Crystal Lopez, Helen Ronen, Fabrice Van Michel and Jacqui Zalcberg of Columbia Law School’s Human Rights Clinic and Steven Watt, Lenora Lapidus, Emily Martin and Araceli Martínez-Olguin from the American Civil Liberties Union.