Continued activism by shareholders seeking to influence corporate policy means that proxy advisory firms will remain busy—but they themselves may be subject to new forms of regulation, business law faculty members said at a June 7 conference on mergers and acquisitions and corporate governance. The annual event was sponsored by the Law School and law firms Gibson, Dunn & Crutcher LLP and Wachtell, Lipton, Rosen & Katz.

In numbers, the pace of shareholder activism has slowed compared with the record level of activity in 2018, when 979 shareholder campaigns targeted publicly held companies. But the figures “obscure a lot,” said Eric Talley, the Isidor and Seville Sulzbacher Professor of Law and co-director of the Ira M. Millstein Center for Global Markets and Corporate Ownership. “Activism is growing, becoming more global, drawing in new types of activists, and sweeping up companies of all sizes.”

Firms based outside the United States are increasingly subject to shareholder campaigns, and campaigns also have begun targeting much larger firms, Talley said while leading a panel discussion on the subject. It was once rare for shareholder activism to target firms with capitalization over $1 billion, but now “there are much bigger fish that are on the activism radar screen.”

About one-third of shareholder proposals are intended to elect corporate board members, and about 20 percent of those succeed, “whether full control [of the board] or merely a candidate,” Talley said. A recent trend, he said, is shareholder activism focused on a merger or acquisition—sometimes shareholder campaigns on opposite sides of a deal, he pointed out. New players, including mutual funds and employees, he added, are leaping into investor activism. 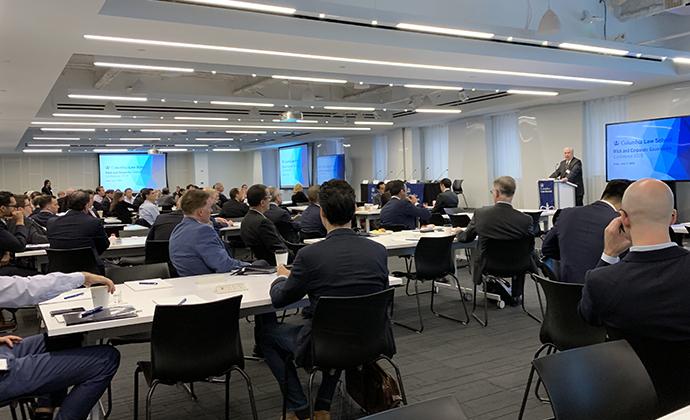 Currently, a shareholder need hold only $2,000 worth of a company’s stock (or, alternatively, 1 percent of shares) to qualify to present a shareholder proposal—a threshold that is under consideration for change by the U.S. Securities and Exchange Commission, said John C. Coffee Jr., the Adolf A. Berle Professor of Law and director of the Center on Corporate Governance, who co-chaired the conference.

For very large companies, 1 percent is too high, Coffee said. “How much of an interest should a shareholder have? We certainly agree that it shouldn’t be 1 percent, but $2,000 sounds low.”

Panelists also discussed prospects for regulation of proxy advisory firms, which advise institutional investors on how to vote on shareholder proposals.

Proxy advisers have been criticized for potential conflicts of interest because they offer not only proxy voting recommendations to investors but also provide consulting services on corporate governance. The SEC is considering a rule requiring proxy advisers to register with the SEC as investment advisers do. It is unclear whether such registration would require advisers to file with the SEC their communications with advisees, which might increase the potential for litigation. Nor is it clear whether proxy advisers would have to respond if the company says the recommendation contains inaccurate information, Coffee said.

A bill currently in the U.S. Senate would require the SEC to regulate such firms. Regulation is “looming,” Coffee said. “The business community really wants it.”