Professors Gordon and Gilson Engage in Discussions on Shareholder Activism

Jeffrey N. Gordon, Columbia Law School’s Richard Paul Richman Professor of Law, and Ronald J. Gilson, the Marc and Eva Stern Professor of Law and Business, are spearheading an effort by a group of academics trying to build consensus among American and European policymakers over how corporate shareholder behavior should—and should not—be policed.

As part of the Transatlantic Corporate Governance Dialogue, Gordon and Gilson participated in a major conference with policymakers from the U.S. and the European Union in Washington, D.C. This forum brings together leading academics from law, economists and financial experts, regulators, judges, lawmakers, corporate leaders, investors, and other corporate constituencies to engage in forward-looking discussions about corporate governance issues that are or will be at the forefront of policymaking on both sides of the Atlantic. 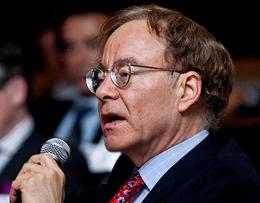 “This dialogue series is unique,” Gordon (pictured, left), who co-directs the Law School’s Center for Law and Economic Studies, said of the conference. “It brings together two different sets of groups: First, there are policymakers and academics—parties who don’t often talk to one another—and second, representatives from the U.S. and Europe, where prevailing attitudes may differ considerably.”

The Dec. event was co-sponsored by Columbia Law School and the European Corporate Governance Institute, and was held at the headquarters of the U.S. Securities Exchange Commission (SEC).

The title of this year's conference, the eighth in the series, was “Shareholder Engagement: What is Appropriate?” Attendees were tasked with zeroing in on the role that activist shareholders play and whether their role is inherently driven by “short-termist” factors or by value creation over a longer term. Activist shareholders are typically, although not exclusively, made up of hedge funds.

“It is a schizophrenic debate in the policy world,” said Gilson, who served as the conference chair. “On the one hand, the regulators—particularly in Europe—want shareholders to act like real stewards. But in the United States, they are concerned that activists shareholders are trying to push management into doing certain things for short-term gains, and if (management) won’t cooperate, they wage a proxy fight.”

Financial regulatory and corporate governance reform are hot-button issues and have unprecedented importance in Washington, New York, Brussels, and nearly every major international financial capital. The fallout from the financial crisis has led to a surge in scrutiny heaped on the SEC, and the Dodd–Frank Wall Street Reform and Consumer Protection Act has pushed the debate over new regulatory issues to the fore.

The SEC is now weighing significant changes to its disclosure requirements that apply to significant shareholders—the “beneficial ownership” rules. Current SEC regulations allow for a 10-day disclosure window after a shareholder crosses a 5-percent ownership threshold. Some parties have proposed a much shorter time frame. Earlier disclosure may boost stock prices, which could constrain the size of an activist’s toehold position and thus the economic returns stemming from activism. 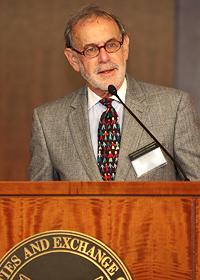 Unlike some of their European counterparts, Gilson (pictured left) and Gordon take a more favorable view of activist shareholders, arguing that their power is ultimately an expression of institutional investor voice. “Without institutional support, the activists have little power,” said Gordon.

Gilson and Gordon are co-authoring a paper on the issue of activist shareholders that examines whether these shareholders are inherently good or bad for stockholders and the market as a whole. The paper is set for a March release.

“These are some of the highest-profile issues in corporate law because CEO interests are implicated and the stakes seem high,” said Gordon. “It can generate a lot of emotion.”

Video of speeches and panel discussions is available here.