New York, May 18, 2012—Columbia Law School’s Sexuality and Gender Law Clinic has secured asylum in the United States for a gay woman who feared she would be persecuted in her native Peru because of her sexual orientation, citing the South American nation’s unwillingness to protect lesbian, gay, bisexual, and transgender (LGBT) individuals.

The U.S. Department of Homeland Security on Tuesday granted asylum to the woman, Karina De Jesus, after a team of students from the clinic proved that she feared persecution based on her sexual orientation. The students representing De Jesus also helped her persuade officials to allow her to apply for asylum after a key deadline had already passed. Asylum seekers typically must file for asylum within one year of arriving in the United States. The students successfully argued that the trauma De Jesus suffered because of her experiences in Peru, together with her recent marriage to another woman, warranted permission for her to file after the one-year deadline.

“Karina’s experience as a lesbian in Peru, supported by friends and family who still live there—as well as by reports and news articles—shows that the Peruvian government does not protect LGBT individuals from sexual orientation–based crimes,” said Julia Braker ’13, a student who worked on the case. “Lesbians face both physical and sexual violence, and the Peruvian police fail to address this persecution.” 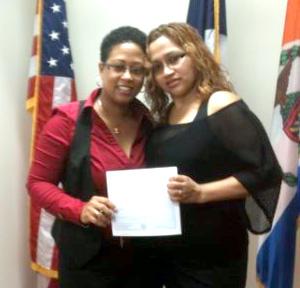 Karina De Jesus, right, together with her wife.

The decision to grant asylum to De Jesus comes at a time when conditions for LGBT individuals in Peru are extremely dangerous. A recent study by Movimiento Homosexual de Lima, a Peruvian LGBT community organization, found that each week a person is killed in Peru due to sexual orientation or gender identity.

“I am so happy that I was granted asylum,” De Jesus said. “I am finally able to live my life without fear, and I now am able to realize my dreams, like starting a family.”

De Jesus, who lives with her wife in the Bronx, was referred to the clinic by Immigration Equality, a national organization focused on immigration rights for LGBT individuals that provided important assistance in the case.

“Karina is an amazing woman, and we are thrilled that we were able to help her with her asylum application,” Hehir said. “She deserves to live as an open lesbian with the woman she loves without the fear of violence or persecution.”

Columbia Law School’s Sexuality and Gender Law Clinic addresses cutting-edge issues in sexuality and gender law through litigation, legislation, public policy analysis, and other forms of advocacy. Under the guidance of Professor Suzanne B. Goldberg, the Herbert and Doris Wechsler Clinical Professor of Law and director of the Law School’s Center for Gender & Sexuality Law, clinic students have worked on a wide range of projects, from constitutional litigation to legislative advocacy to immigration cases. They serve both individual and organizational clients in cases involving issues of sexuality and gender law.

For more information, please visit the clinic’s website. Goldberg can be contacted by telephone at 212-854-0411 or by email at [email protected].