Columbia Law School announced the first seven members of the Class of 2018 to be awarded, prestigious postgraduate fellowships. Upon graduation this spring, the students will be working at a range of organizations from the internationally-focused Human Rights Watch to Catholic Migration Services, a nonprofit that provides free legal services to low-income immigrants in Brooklyn and Queens.

Some fellowships, such as the Millstein Public Interest Fellowship and Herbert and Nell Singer Social Justice Fellowship,  are open to Columbia Law School students only, while others draw from a national pool. The one- and two-year fellowships provide stipends for students to work at a nonprofit or governmental agency.

The seven recipients have diligently prepared for public service by working in clinics, participating in externships, and leading student organizations. “Students have to develop a strong resume for a public interest career,” says Erica Smock, dean of Social Justice Initiatives (SJI), the office that oversees the Law School’s pro bono program and provides career counseling and other resources for students interested in public service. Smock notes that the seven students also participated in the Law School’s Guaranteed Summer Funding (GSF) program. Administered by SJI, it provides funding for students to work full-time in public service internships during the summers of after both their 1L and 2L years.

Highly accomplished, dedicated, and ambitious, the students profiled here are now poised to apply their lawyering skills in the real world. 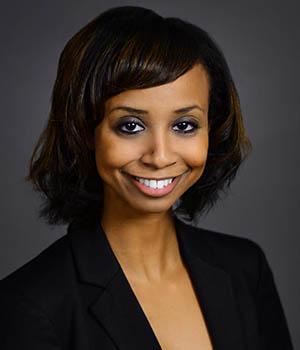 Enrolling in Columbia Law School’s Human Rights Clinic was a transformative experience for Yasmin Dagne. Associate Clinical Professor of Law Sarah Knuckey “mentored me, inspired me, and taught me how to be a critical advocate. She embodies the ‘practice what you teach’ ethos,” says Dagne. She also cites Professor David Pozen as a major influence. “He has deepened my sense of the diversity of work in public service, including government, the nonprofit sector, and the academy,” she says.

Dagne has used her summers to explore career possibilities by interning at the NAACP Legal Defense and Educational Fund and the United States District Court for the District of Columbia. On campus, she served as an articles editor of the Columbia Law Review and the academic chair of the Black Law Students Association.

As the recipient of the  Leonard H. Sandler Fellowship, she will work at Human Rights Watch (HRW) for a year and devote herself to investigating human rights abuses.“Someone at HRW described their roles as ‘custodian of other people’s voices,’ and I think this characterization is apt,” she says. “I am eager to develop advocacy strategies that place survivors and victims’ families at the center of the work.” 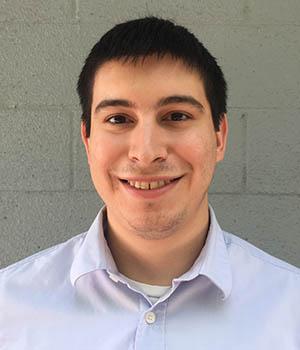 Ricardo Garza’s mother’s family moved from Mexico to Texas in the early 20th century, and his father’s family has been in Texas even longer. Nevertheless, he says far too many people including his family are stopped by police and immigration authorities in his native Rio Grande Valley, Texas, on suspicion of being undocumented. “Our civil liberties shouldn’t be eroded through racial profiling, and needless traffic stops just because we live near the border with Mexico,” says Garza.

But, according to Garza, the situation is far worse for those without citizenship or legal status.  “In law school, I obtained the skills needed to investigate and intervene for my community through impact litigation and civil rights education and outreach,” says Garza, who participated in the Law School’s Immigrants’ Rights Clinic.

He will use the Singer Fellowship to work at the Texas Civil Rights Project (TCRP), a legal advocacy organization focused on voting rights, criminal justice reform, and economic and racial justice, where he was an intern last summer. “I will have the opportunity to document civil rights abuses happening now along the border and help me make meaningful progress in addressing rights violations stemming from immigration over-enforcement and over-policing,” he says. 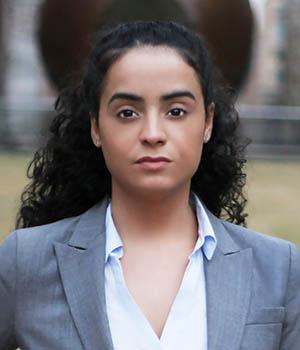 The personal has always been the political for Carolina Rivas. “I am a low-income, queer, first-generation Caribbean-American,” says Rivas, who grew up in Brooklyn and recalls having to act as a translator for her mother at social services offices. “These intersections of identities facilitate my understanding of the difficulties faced by those most relegated to the periphery.”

Rivas has used Columbia Law School’s experiential education offerings to pursue a public service career path. She enrolled in both the Sexuality and Gender Law Clinic and the Immigrants’ Rights Clinic, which included traveling to Texas to assist detained families preparing for asylum interviews. She has developed professional expertise outside the classroom by interning at the Sylvia Rivera Law Project and the ACLU’s LGBT & AIDS Project, volunteering pro bono for the Transgender Legal Defense & Education Fund Name Change Project and co-founding the student organization, Queer and Trans People of Color.

As a Norton Rose Fulbright Fellow at The Door, a social services agency for disconnected youth, Rivas’s mission is to provide legal services to immigrant youth that will offer them paths to citizenship and steer them to educational and employment opportunities. “My broader goal is to learn how to creatively advocate for marginalized communities in an era where there are constant threats to women’s and LGBT rights, and DACA has been rescinded,” she says. “I believe that beginning my career during this turbulent period of immigration law will offer invaluable lessons to carry forward.” 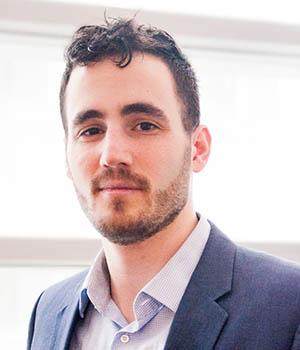 Mitchell Schwartz arrived at Columbia Law School with a B.A. from Brandeis. He joined a pro bono legal clinic for the homeless during his first month at Columbia and spent his first summer as a Law Clerk at the Orleans Public Defenders in New Orleans. As a 1L he helped start the Public Defender Students of Columbia Law School and later served as president. In fall 2016, he enrolled in Professor Brett Dignam’s Challenging the Consequences of Mass Incarceration Clinic, where he is now a student supervisor working on a lawsuit challenging a client’s placement in solitary confinement. “Brett has been nothing short of the greatest teacher and mentor there could be,” he says.

This summer, Schwartz will begin the two-year E. Barrett Prettyman Fellowship at Georgetown Law. “The intensive focus on training effective advocates will position me to be a better public defender for the rest of my career,” he says. 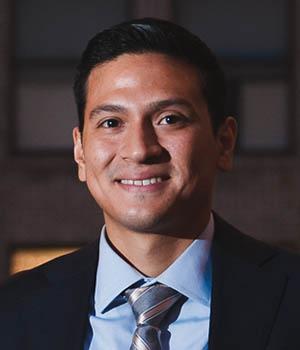 Growing up in New York as the son of immigrants from Ecuador, Jose Miranda developed an intimate understanding of the injustices faced by marginalized communities. “Justice is simply not justice if it only works for some,” he says. Miranda came to Columbia Law School to develop the skills, credentials, and authority to redress structural inequality. “I decided early on that I would use my power as a lawyer to solve problems in the interest of the many, not the few,” he says.

Miranda gained direct service experience through an internship at Bronx Legal Services (BXLS) and honed his research skills with an internship at New York Lawyers for the Public Interest and an externship at the Center for Popular Democracy. He also initiated two pro bono projects. He rallied 20 Columbia Law School students to screen 90 Bronx residents seeking immigration help and connecting them to pro bono attorneys; and, he co-wrote a grant to establish know-your-rights workshops for immigrant families, enlisting law students and dozens of BXLS attorneys to help hundreds of families draft documents like power of attorney forms and guardianship petitions.

The Immigrant Justice Corps Fellowship will support Miranda for two years working full time at Catholic Migration Services, a nonprofit that provides free legal services to immigrants in Brooklyn and Queens. He expects to gain expertise representing immigrants facing deportation from the United States and organize workshops to build the political power of immigrants on the ground. “I hope one day I can say that my law practice enabled ordinary people to create their own change,” he says. 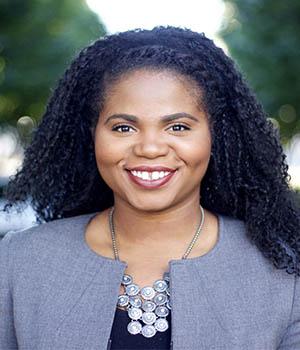 Patricia Okonta's experiences growing up in a small, predominately white community allowed her to observe injustices and intolerances as they pertain to race.  “Constant confrontation with prejudice gave me a front-row seat to justice denied and solidified my desire to pursue racial justice advocacy at an early age,” she says.

Okonta has done just that since arriving at Columbia Law School. She was co-president of the Student Public Interest Network, community service chair of the Black Law Students Association, and executive editor of the Columbia Human Rights Law Review.  She also interned at the U.S. Department of Justice and participated in the Externship on Advancing Social and Environmental Justice in the New York Attorney General’s Office Civil Rights Bureau.

Supported by her Skadden Fellowship, Okonta will return to the NAACP LDF, where she interned in the summer of 2017. She will work on a project to “remove barriers to safe and affordable housing for individuals with criminal records and their families,” she says. “The project isn’t a ‘one-and-done’ for me. This sort of work is what I want to do for the rest of my life.” 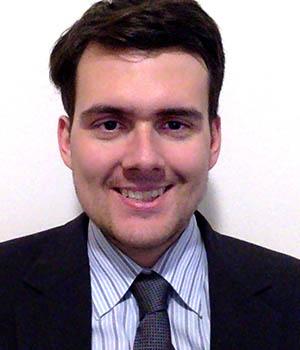 When he was an undergraduate at American University in Washington. D.C., Jesse Hubbard interned in U.S. Rep. Jim Himes’ office in Bridgeport, Connecticut. “I saw firsthand the heavy toll that the financial crisis had taken on my district’s constituents,” he says. He came to Columbia Law School determined to become an advocate for average citizens.

He was named a Harlan Fiske Stone Scholar, served as an articles editor of the Columbia Human Rights Law Review’s A Jailhouse Lawyer’s Manual, and helped create the Prison Healthcare Initiative, a student-run organization that began in Professor Bernard Harcourt's Legal Methods class. He interned in the capital at the U.S. Department of Justice in 2016 and the Lawyers’ Committee for Civil Rights Under Law in 2017.

He returned to Washington for the fall semester of his 3L year to participate in the Externship on the Federal Government in Washington, D.C,  with a full-time position as a law clerk on the Senate Judiciary Committee. “Almost a decade after the crash, the semester made clear to me that the need for meaningful, potent financial regulation is as strong as ever,” he says.

The Millstein Public Service Fellowship provides funding to recent graduates who work in the area of financial regulation in the federal government. “I will have a unique opportunity to serve the public as a newly-minted law school graduate,” says Hubbard who has not yet settled on where he will spend his fellowship year.