Media Contact:
Public Affairs Office, 212-854-2650 [email protected]
New York, Nov. 2, 2010—Sen. Orrin Hatch, R-Utah, told a Columbia Law School audience the Obama administration was largely to blame for the slow pace of federal judge confirmations and that he would never filibuster a judicial nomination.
Hatch said perceptions that Republicans in the Senate had deliberately slowed the confirmation of federal district and appellate court nominees did not square with reality. 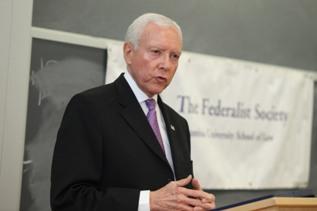 “When we fight over judicial nominees, we are really fighting over judicial power,” Hatch said during an Oct. 18 appearance sponsored by the Federalist Society. “Each dispute over a nominee is not about that person, but about the kind judge that nominee is likely to be.”
Hatch, whose son Brent Hatch ’84, co-founded the Law School’s Federalist Society chapter, said the blame for lingering vacancies on the federal bench rests squarely on the White House.
“The truth is that President Obama got off to a slow start last year, sending only one-third as many judicial nominees to the Senate as President Bush had in his first year,” said Hatch, a 34-year Senate veteran. “I know this fact makes for less-exciting stories than a confirmation blockade myth.”
He added that the Senate confirmed 81 percent of the nominees sent by Sept. 1, compared to only 61 percent Democrats allowed President Bush in the same period.
“Even though President Obama has made 30 percent fewer nominees than President Bush at this time, the Senate is confirming nominees faster and confirming a higher percentage,” Hatch said. 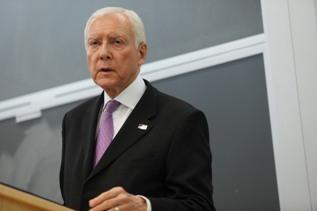 Despite the often-heated rhetoric that accompanied Obama’s nominations of Sonia Sotomayor and Elena Kagan to the U. S. Supreme Court, Hatch opposes filibusters of judicial nominees, noting that “I personally believe the Senate’s right is to advise and consent.”
Hatch voted against Sotomayor and Kagan.
Columbia Law School, founded in 1858, stands at the forefront of legal education and of the law in a global society. Columbia Law School joins its traditional strengths in international and comparative law, constitutional law, administrative law, business law and human rights law with pioneering work in the areas of intellectual property, digital technology, sexuality and gender, criminal, national security, and environmental law.
Visit us at http://law.columbia.edu