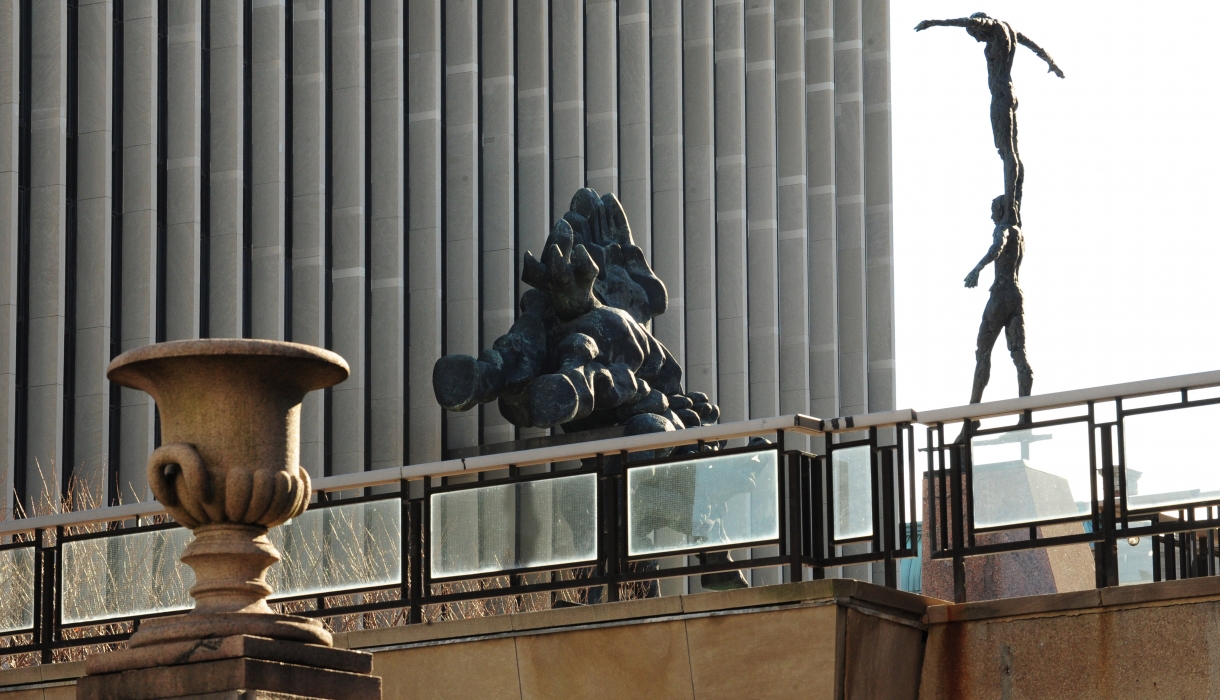 New York, August 30, 2012––When members of the Class of 2015 gathered for a casual outdoor picnic lunch during this month's orientation, they were surrounded not just by future friends, but also by some of New York City’s finest outdoor sculptures, created by renowned artists such as Henry Moore and Jacques Lipchitz. The site of this veritable small-scale sculpture park is Revson Plaza, the bridge that connects the Law School’s main building to the Columbia University Morningside Heights campus.

Notable works of art on display at Revson Plaza include: 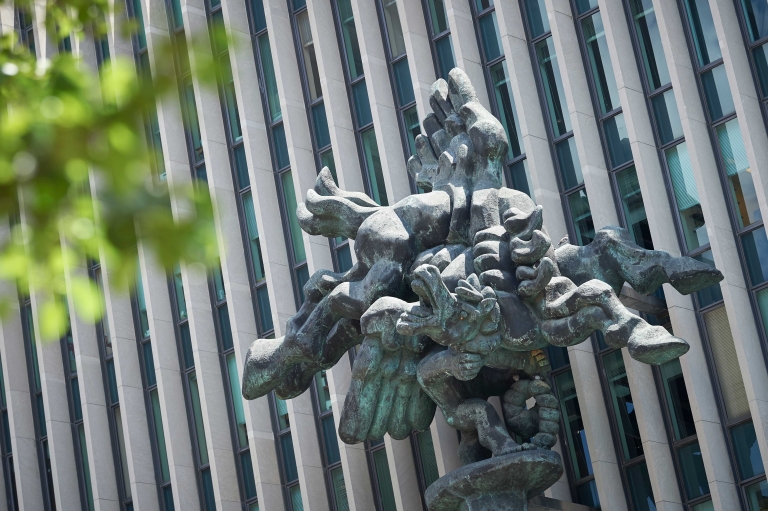 Bellerophon Taming Pegasus
Jacques Lipchitz
1966-77
“Don’t expect a blinded lady with scales and all those things from me,” said sculptor Jacques Lipchitz when Columbia Law School approached him in 1964 to create a work of art on the campus. “I will try to think of something else.”
The result is the 23-ton bronze sculpture “Bellerophon Taming Pegasus” towering above the west entrance of Jerome Greene Hall on Revson Plaza. At approximately 30 by 28 feet and nearly five stories high, the outdoor sculpture is one of New York City’s largest.
Lipchitz’s sculpture depicts the Greek hero Bellerophon wrestling with the winged horse Pegasus, whose hooves, wings and tail radiate in all directions. The tangle of bodies stands precariously atop a base that looks like a giant railroad spike driven into the stairs.
The placement of “Bellerophon” takes careful account of its surroundings. The sculpture’s whirlwind energy contrasts to the repeated vertical beams of Jerome Greene Hall behind it, while its mythological theme speaks to the neo-Classical architecture of Philosophy Hall across Revson Plaza on the University’s main campus.
The story of Bellerophon represented the dominance of man over nature, according to Lipchitz. In Greek mythology, Bellerophon tamed Pegasus with a golden bridle from the goddess Athena and with the horse’s help accomplished a series of tests Zeus had assigned him. “You observe nature, make conclusions, and from these you make rules…and law is born from that,” the artist once said.
Commissioned in 1966, “Bellerophon” took 11 years to arrive in Morningside Heights. Enlargements made in 1969 from plaster casts disappointed Lipchitz, who asked to start the project over. After his death in 1973, work continued at a foundry in Pietrasanta, Italy. Four years later, the sculpture was transported overseas in pieces and brought up the East River. Installation on the Law School campus took place six days later, and, after final work on the structural details was complete, a dedication followed on November 28, 1977.
The Law School community has interpreted the sculpture in a variety of ways. According to a “New York Times” article about the installation ceremony, one professor said, “That looks like me trying to teach criminal law.” He asked to remain anonymous. 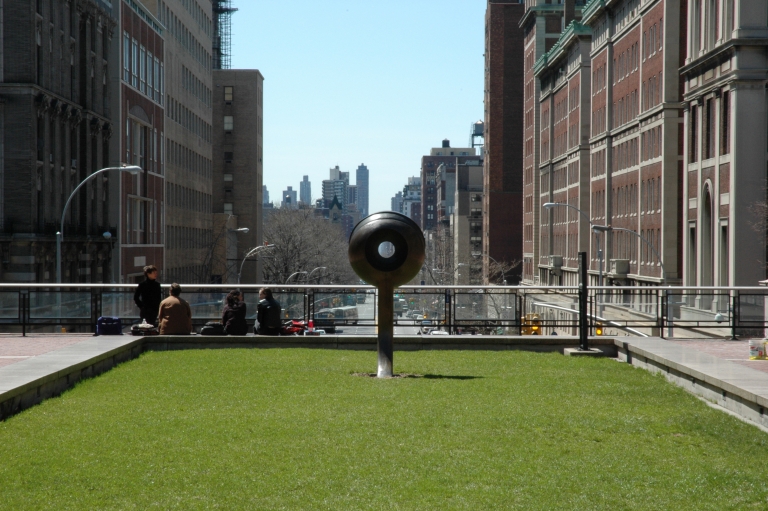 Life Force
David Bakalar
1988
Sprouting from the grass at the south end of Revson Plaza is Columbia Law School’s fourth bronze, “Life Force” by David Bakalar.
The site appealed to the artist, who hoped that students might gather alongside the sculpture and peer through its “eye.” The conical portal, directly above the middle of Amsterdam Avenue, offers a long view of the street toward Midtown Manhattan to the south and toward Washington Heights to the north.
Bakalar, an artist and physicist who trained in metallurgy and founded and led for 30 years the Transitron Electronic Corporation, said that the work represents “the bonding forces – the birth force, the death force, the competitive force, and the nurturant force.”
“Life Force” joined Henry Moore’s “Three-Way Piece: Points” on Revson Plaza in 1992. Both bronze sculptures offer an interactive experience and share a playful, biomorphic structure. There are key differences, however. The smooth surface and the geometry of “Life Force,” based upon concentric circles, suggest a more machine-oriented aesthetic than the pock-marked areas and irregular curves of “Three-Way Piece.”
The sculpture, donated anonymously, honors Ruth Goldman Schapiro, Class of 1950. 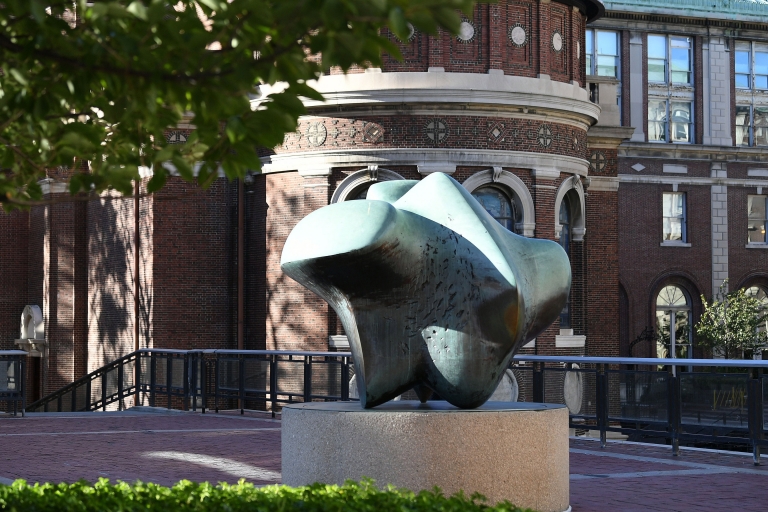 Three-Way Piece: Points
Henry Moore
1967
Henry Moore’s “Three-Way Piece: Points,” a gift of the Miriam and Ira D. Wallach Foundation, was the first of four bronze sculptures to arrive on Revson Plaza.
The curvaceous bronze form’s three “feet” rest on a bronze platform set in a concrete cylindrical base. With no clear back or front, “Three-Way Piece” encourages the viewer to walk around the sculpture and observe the campus from different vantage points. Its placement on the north end of Revson Plaza emphasizes the viewer’s elevated position on a pedestrian bridge above Amsterdam Avenue. The undulating surfaces echo the round walls of St. Paul’s Chapel to the northwest but contrast to the linear beams of Jerome Greene Hall to the southeast.
Wallach, a member of the Class of 1931, was a generous patron of the Law School and with his wife, Miriam, established Columbia University’s art gallery in 1986. He owned a smaller edition of “Three-Way Points” when he obtained one of three large-scale casts of the piece for Revson Plaza. In 1998, a fourth cast numbered “0/3” – indicating an artist’s proof – at the Nelson-Atkins Museum of Art in Kansas City came to light.
Approaching its 40th anniversary on the Plaza, the sculpture’s patina has evolved in response to the elements. While Moore had said that some weathering was a natural part of a work’s history, the University has undertaken conservation efforts to control that process and keep the sculpture in proper condition. 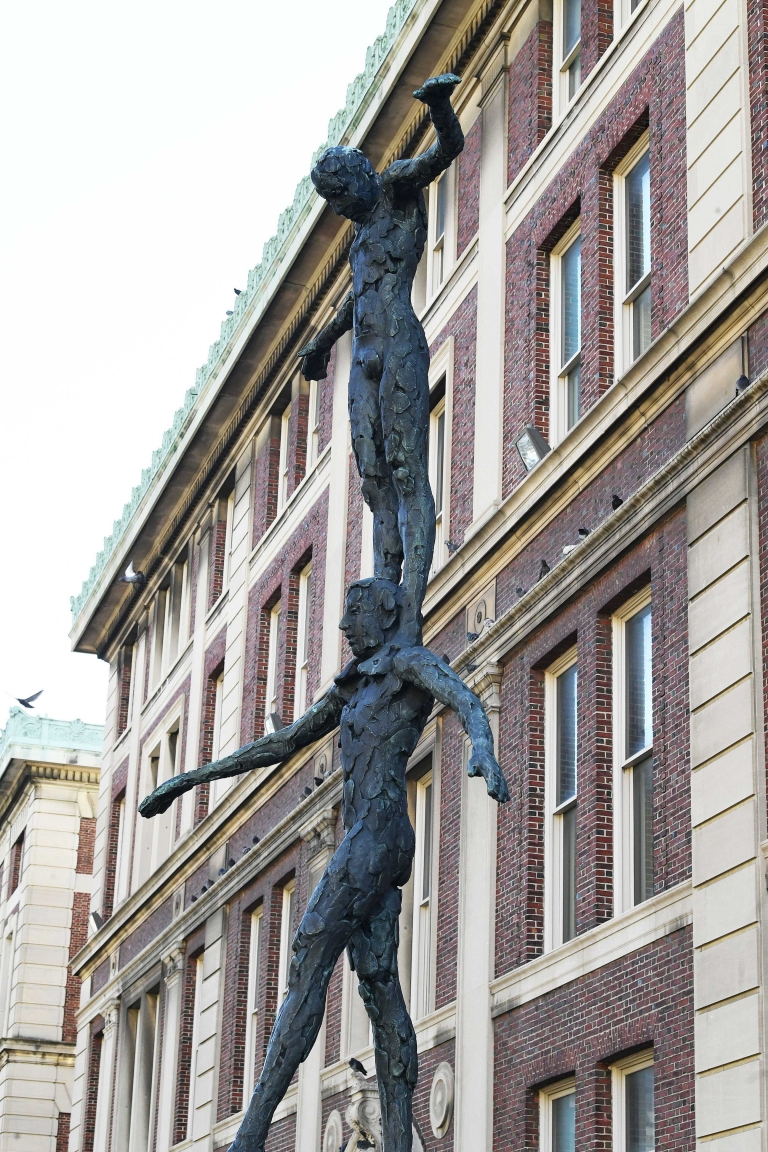 Tightrope Walker
Kees Verkade
1973-79
When artist Kees Verkade was asked to make a memorial for General William J. Donovan, Class of 1907, he watched archived films of the war hero and interviewed his colleagues for inspiration. Verkade created the bronze sculpture “Tightrope Walker” to portray Donovan’s courage and “controlled daring.”
“Wild Bill” Donovan, considered the father of the modern American intelligence service, came to prominence in World War I as commander of New York’s “Fighting 69th” regiment and subsequently earned the Congressional Medal of Honor. Between wars, he practiced law and served as a U.S. District Attorney, Assistant Attorney General and chairman of several government commissions. In 1941, President Franklin D. Roosevelt, Class of 1908, appointed Donovan the first Coordinator of Information. After the U.S. entered World War II, Donovan became head of the Office of Strategic Services, the forerunner to the Central Intelligence Agency. After the war he served as special assistant to the U.S. Chief Prosecutor in the Nuremberg Trials, was the U.S. Ambassador to Thailand and helped refugees as a member of the International Rescue Committee, which posthumously awarded him the Freedom Award. When Donovan died in 1959 at age 76, he had received the nation’s four highest decorations.
The Donovan Memorial, dedicated in 1979, was a gift of his friends and colleagues. Standing on the north end of Revson Plaza, “Tightrope Walker” depicts one figure balancing atop the shoulders of another as he crosses a tightrope, whose length is left to the imagination of the viewer.
To celebrate the 100th anniversary of Donovan’s graduation from Columbia Law School, a rededication of “Tightrope Walker” and a conference on national security will take place on Thursday, October 18.

Flight
Gertrude Schweitzer
Date unknown
Originally titled “Abstract Sculpture,” Gertrude Schweitzer’s stainless steel sculpture has since acquired the appropriate name “Flight.” The 8-foot-high triangle rises off a stone pedestal in the grass behind Jerome Greene Hall and leans with its obtuse angle toward the east. Its parallel faces reflect the sky and surrounding buildings with some distortion due to the surface’s texture, while the matte edges of the triangle and steel top on the pedestal help define the object’s boundaries.
Despite initial conservation concerns about an outdoor placement, Schweitzer’s sculpture, rendered in relatively weather-resistant stainless steel, has remained in good condition since she gave it to Columbia in 1979.
Photo Credits: Lillian Vargas, Juliana Thomas, Eileen Barroso