The center was recently honored for outstanding contributions to environmental protection. 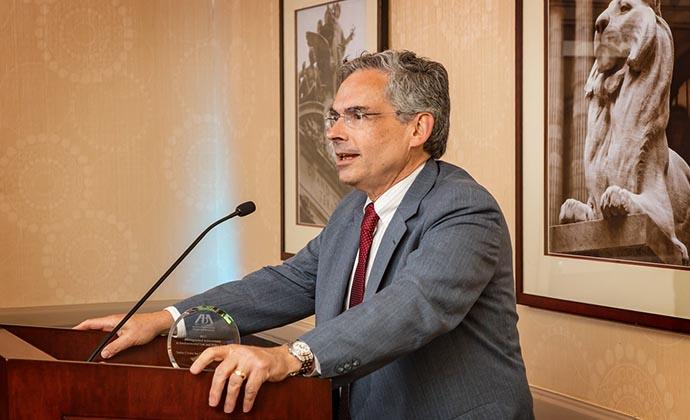 Columbia Law School’s Sabin Center for Climate Change Law was honored on August 13 by the American Bar Association (ABA) with the Distinguished Achievement in Environmental Law and Policy Award in recognition of its outstanding contributions to environmental protection and sustainable development efforts in the United States.

The award was presented by the ABA Section of Environment, Energy and Resources during the association’s annual meeting in New York City.

“The Sabin Center has emerged as one of the premier sources, arguably the premier source in the world, for information, analysis, and education on the law of climate change,” said Pamela Esterman, chair of the ABA awards committee.

Accepting the award was Faculty Director and Andrew Sabin Professor of Professional Practice at Columbia Law School Michael B. Gerrard, recently ranked as the top “Thought Leader” in environmental law in North America by Who’s Who Legal. Gerrard said, "These are perilous times for the effort to fight climate change. Law and lawyers have never been more important, and it is gratifying that the ABA is recognizing our work in this effort," said Gerrard.

“Combating the global challenges brought on by climate change demands profound changes in the behavior of, and collaboration among, governments, private sector firms, NGOs, and individuals. The Sabin Center is at the forefront of this continuing fight," said Gillian Lester, Columbia Law School’s Dean and the Lucy G. Moses Professor of Law. “I am extremely proud of Mike Gerrard’s pioneering work to develop and establish an effective legal response to climate change, while also training the next generation of lawyers who will be leaders in the field.”

One of the Sabin Center’s many notable and recent initiatives is the Climate Deregulation Tracker, which was launched after the inauguration of President Trump to track steps by the new administration and Congress to roll back climate protection policies. Other initiatives include:

In his acceptance speech, Gerrard urged environmental lawyers in the United States to play their part in fighting the Trump administration’s deregulatory agenda in this “time of unprecedented peril to U.S. environmental law.”

At the ceremony, the ABA also presented awards to two other leading environmental lawyers, John Cruden, former assistant U.S. Attorney General for the Lands and Natural Resources Division, and Richard Ottinger, a former Congressman and dean of Pace Law School.