Press contact: Jim Vescovi at 212-854-4937
E-mail: [email protected]
Whether the special treatment of charitable giving under U.S. tax laws is necessary, effective, or in need of change was the subject of “Taxing Philanthropy,” a round-table discussion hosted on November 9 by the Law School’s Charles Evans Gerber Transactional Studies Center.
Columbia Law School Dean David M. Schizer opened the session with a presentation of his paper “Subsidizing Charitable Contributions: Incentives, Information and the Private Pursuit of Public Goals,” which explores why charitable contributions are subsidized through special tax treatment rather than through other means. Noting that a tax subsidy for charity is “a strategy to help privatize the pursuit of public goals,” Schizer presented three competing rationales for the subsidy: (1) to encourage more generosity by donors; (2) to measure popular preferences about public goals; and (3) to recruit private-sector monitors and advisors for nonprofit entities. He also discussed the tradeoffs in each of the rationales, adding that the design of a particular tax subsidy chosen to resolve these tradeoffs will depend on the goal of the subsidy.
Commenting on Dean Schizer’s paper, Alexander Friedman ' 97, chief financial officer for the Gates Foundation, posited that the market, not government, should judge the propriety of the causes to which individuals direct their donations. He identified potential problems in the paper’s consideration of tradeoffs involved in the different ways that the tax code provisions on charity could be re-engineered.  Panelist Edward J. McCaffery, a USC Gould School of Law professor, emphasized the need for less control over the causes wealthy donors choose to support with charitable donations. Rather, in an era when government is doing less to pursue the public good, there needs to be less micromanaging and more simplification of charitable donations under the tax laws because “we need more philanthropy, not less.”

Speakers (l to r) Law School Dean Schizer, Alexander Friedman '97 and  Edward McCaffrey
Harvard Law School professor Daniel Halperin took the day’s discussion in a different direction entirely by posing the question, is special tax treatment of the investment income of nonprofit or charitable organizations even justified?  Halperin pointed out that changing the law on full or partial taxation of investment income could favor organizations that currently spend more of their assets and accumulate less for future use. Moreover, in the case of endowments deemed to be excessive, he suggested that increased levels of spending could be mandated or be encouraged through the taxation of investment income.
In response, Catherine E. Livingston, IRS deputy associate chief counsel for tax-exempt and government entities, pointed out that heavily taxing investment income of nonprofits might cause them to move most of their funds to offshore tax havens. However, she called for more input from philanthropy experts as to whether current spending by nonprofits is always in the public interest.   In Yale Law School professor Henry Hansmann’s opinion, the elimination of tax exemption would curtail the ability of nonprofits that are undercapitalized to expand. Similarly, he noted that the taxing of endowment income would be problematic for many nonprofits with capital constraints. Instead of spending mandates, Hansmann suggested that it might be enough to threaten to revoke the tax-exempt status of nonprofits if they over-accumulate their endowments. 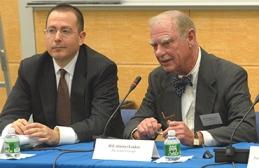 Dean Schizer (left) and Gerry Lenfest '58
In the final segment of the roundtable, Dean Schizer moderated a panel discussion with Alphonse “Buddy” Fletcher, Jr., founder and CEO of Fletcher Asset Management, Inc., H.F. (Gerry) Lenfest ’58 of the Lenfest Group, Peter C. Harvey '82, a partner at Patterson Belknap Webb & Tyler and former attorney general of New Jersey, and Ellen V. Futter '74, president of the American Museum of Natural History. The panelists addressed a wide range of issues such as who should determine the social value of a gift in perpetuity to a charity, the regulation and governance of nonprofit organizations, and the problems presented by onerous restrictions placed by donors on the use of their donations.