New York, Dec. 22, 2011—Although the uprisings in the Arab world have changed the Middle East, the only serious threat to the security of Israel remains the possibility that Iran will acquire a nuclear weapon, the former Israel Defense Forces (IDF) chief of staff told an audience at Columbia Law School on Nov. 29. 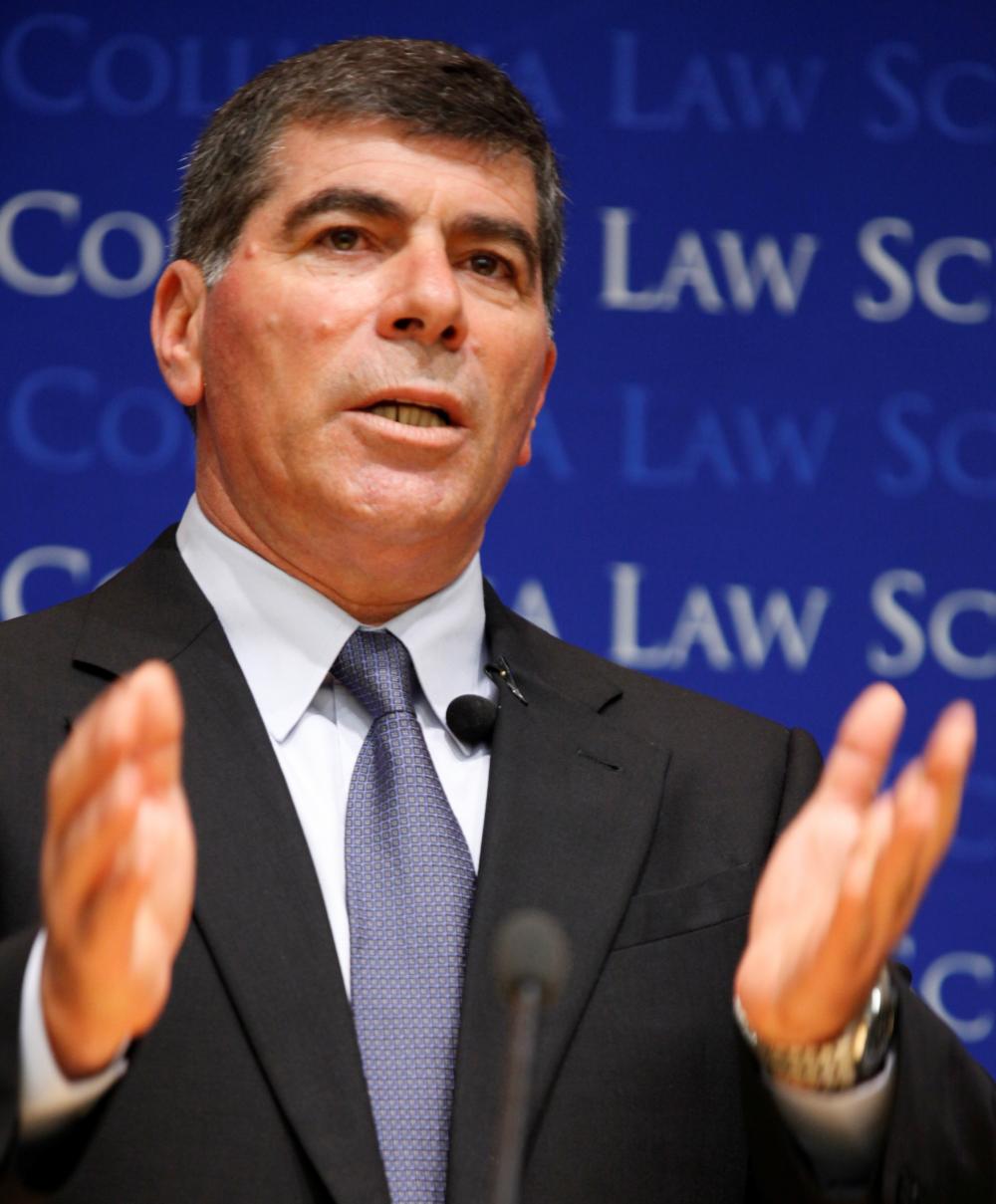 Retired Gen. of the Army Gabi Ashkenazi (left) was invited to speak at Columbia Law School by Zohar Goshen, the Alfred W. Bressler Professor of Law and director of the Center for Israeli Legal Studies.
A visiting fellow at the Brookings Institution, Ashkenazi, who retired from the IDF earlier this year, spent most of the hour-long talk reviewing the security situation on Israel’s borders.
He surveyed the region’s new political landscape following months of protests that have toppled regimes in Tunisia, Egypt, and Libya, and led to bloody crackdowns in Syria, Yemen, and Bahrain. Despite the far-reaching turmoil, he singled out Iran as the most worrisome threat.
“In Israel we say: all options are on the table,” Ashkenazi said. “We cannot avoid making tough choices.” He added that sanctions remain the best option, but does not believe the international community has the will to impose the “painful, crippling” measures necessary to stop Iran from pursuing a nuclear program.
Ashkenazi said Israel is “very concerned” about former Egyptian President Hosni Mubarak’s successor, noting that Israel can only watch as the power struggle continues to play out among the military, religious parties such as the Muslim Brotherhood, and the youthful demonstrators on the street. “We would like to see a democracy on the other side of the border . . . but the truth is, no one can influence it,” he said.
In Syria, Ashkenazi said, the opposition may succeed in ousting President Bashar Assad, although the Army is composed of the ruling minority. He said the fall of Assad would be a major blow to Iran and the Lebanon-based Shiite militant group Hezbollah, allies of Syria and foes of Israel.
Israel is also keeping an eye on developments along its longest border, where Jordanian King Abdullah II is contending with a restive population. “Jordan is in a very vulnerable situation,” he noted.
Ashkenazi was not particularly optimistic about the prospects for restarting stalled peace talks between Israel and the Palestinians, and he said the recent reconciliation in Cairo between Palestinian President Mahmoud Abbas and his Hamas rival Khaled Meshal “doesn’t make things easier for anyone in the region.” Israel’s challenge, he said, is to “contain the situation, not allow it to deteriorate.”
During a Q&A session, Ashkenazi was asked whether his country’s recent prisoner swap with Hamas would only encourage more hostage-taking; in October, Israel freed 1,027 Palestinians to secure the release of Staff Sgt. Gilad Shalit, who had been held by militants in Gaza since 2006.
He defended the deal, saying Israel had no good military option to rescue Shalit, nor was it an option to leave the soldier behind enemy lines. While he does expect more hostage-taking, he said it won’t be because of the trade. “[The Palestinians] didn’t stop trying to kidnap soldiers when they had Shalit,” he observed.
Overall, Ashkenazi was reluctant to speculate about how the Arab Spring will end, except to say that no country in the region will be spared from the protesters’ anger. “The Middle East as we know it will not be the same,” he said.
Ashkenazi’s appearance was made possible by the Center for Israeli Legal Studies, which brings Israeli scholars to the Law School for lectures and creates exchange programs and fellowship opportunities for LL.M. and J.S.D. students. Goshen, the center’s director, recently returned to Columbia Law School after serving three years as head of the Israel Securities Authority.