Represented By CLS, Lenahan Makes Declaration In Her Case

Represented By CLS, Lenahan Makes Declaration In Her Case

JESSICA LENAHAN, SUING U.S. FOR HUMAN RIGHTS VIOLATIONS IN THE DEATHS OF HER THREE CHILDREN

Makes Her Declaration At Inter-American Commission On Human Rights

Now She Awaits A Decision

Press contact: Erin St. John Kelly [email protected]
Office 212-854-1787/cell 646-284-8549/Public Affairs Office 212-854-2650
November 5, 2008 (NEW YORK) – Jessica Lenahan (formerly Gonzales), whose three young daughters were killed in 1999 after police officers failed to enforce a restraining order against her estranged husband, appeared before the Inter-American Commission on Human Rights in Washington, D.C., October 22, to make her declaration in the merits stage of the case. The case, Jessica Ruth Gonzales v. United States of America, which has been championed by Columbia Law School’s Human Rights Clinic and the American Civil Liberties Union, seeks nothing less than to change the way police departments across the country respond to domestic disputes.
In 2005, the U.S. Supreme Court told Ms. Lenahan that she had no recourse under the 14th Amendment against the government for its failure to enforce the restraining order and protect her family. The ruling came in response to a lawsuit she had filed against the Colorado municipality whose police department had largely ignored Lenahan’s pleas for help after her husband had abducted her three daughters.

But the Supreme Court was not the end of the road for Lenahan’s case.

The Law School’s involvement began when Caroline Bettinger-López, who is the deputy director of Columbia Law’s Human Rights Institute, joined the faculty in 2006 from the American Civil Liberties Union. She had assisted with coordinating the briefing of Lenahan’s case before the Supreme Court and brought the case with her to Columbia. 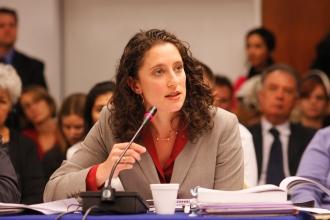 Caroline Bettinger-López at the Inter-American Commission on Human Rights on October 22, 2008

For Chinyere Ezie, that meant working with Lenahan’s son to prepare a victim statement for submission to the Commission. And for Darren Sullivan, it meant helping coordinate the amicus briefs and assisting in preparing a summary of the case to the Commission.
“The students have been involved in almost every aspect of the case,” said Bettinger-López. “They have been pouring through the evidentiary record, doing legal research, and writing sections of briefs.”
In an interview, Lenahan said: “The students deserve so much credit.”
“I hope that through the students’ work we can continue to raise awareness for why it’s important for human rights to be embraced within the United States,” she added.
This year, in addition to the Human Rights Clinic, a second class also contributed. Students Dana Kaufman ’09, Jenny Ryan ’09 LL.M and Nazneen Mehta ’10 from Columbia Law’s Sexuality and Gender Law Clinic assisted Professor Jeffrey Fagan in preparing an expert report that highlights shortcomings in how American police departments enforce protection orders and strive to prevent domestic violence. Fagan’s involvement as an expert in the case grew out of his work on committees at the National Research Council that studied topics such as policing practices and violence within the family.

In all, more than 10 students traveled to the Inter-American Commission on Human Rights in Washington, D.C., to attend the hearing on the merits of the case. The Commissioners, a panel of seven experts in human rights, examined whether the failure of the police to protect Lenahan constituted a violation of the U.S. international obligations under the American Declaration of the Rights and Duties of Man. The hearing was webcast at the Organization of American States’ website.
Lenahan’s team, which included, in addition to Fagan and Bettinger-López, lawyers from the ACLU, sat at the table marked “Peticionario” (“Petitioner” in English). Lawyers for the State Department and other federal agencies sat at the table marked “Gobierno” (“Government”).  Several of the commissioners asked questions in both English and Spanish (which were translated into English through headsets) to both to the petitioners and to the U.S. representatives – about the right to truth, how restraining orders are issued, how police investigations are conducted regarding domestic violence, and the State’s duty under the American Declaration to act with due diligence.
This case, Bettinger-López told the four commissioners present in the hearing, “was about a government’s obligation to provide effective remedies when it fails to fulfill its duty to protect women facing domestic violence.”
On the night Lenahan’s then-husband, Simon Gonzales, abducted their three girls, aged 7, 9 and 10, Lenahan called the local police department in Castle Rock, Colo., nine times in 10 hours seeking help. Instead of making Lenahan’s missing children a priority, the police went about routine business, which included dispatching several officers to respond to a fire lane violation, she said.
Despite being informed of the restraining order, police officers did little more than drive around briefly in search of Gonzales, Bettinger-López said. Later that night, Simon Gonzales drove to the police station and opened fire. He was shot dead by police. In his truck were found the bodies of the three children.

Bettinger-López told the Commission that the police department’s failure to respond aggressively amounted to a “complete disregard for the judicial determination that Simon Gonzales posed a risk to those children.”
At the center of the case is the question of what responsibilities local police departments have to enforce restraining orders and what recourse victims have if police fail to enforce them.
“A restraining order isn’t worth the paper it’s printed on if it’s not enforced,” Lenahan told the Commission.

In Colorado, police are required by law to arrest people for violating restraining orders. Yet, Justice Scalia, in writing for the United States Supreme Court in the 2005 opinion Town of Castle Rock v. Jessica Gonzales, noted that “a well-established tradition of police discretion has long co-existed with apparently mandatory arrest statutes.”

Fagan told the Commission that studies suggest that police officers make arrests only 20 to 40 percent of the time that restraining orders are violated. Professor Fagan recommended that police officers be trained to make arrests whenever probable cause existed, adding that there should be “a presumption that a violation has taken place whenever a call is made.”
Students involved in the case said that as a policy matter, a new approach was needed to encourage a more automatic enforcement of restraining orders.
Zoe Pershing-Foley, a student working on the case, commented after the hearing: “It’s not whether the discretion standard itself has to be thrown out, but whether it has to be so broad.”
A State Department lawyer who represented the United States before the Commission, Kevin Baumert, argued that neither the police department, nor Lenahan herself could have foreseen the tragedy. He urged the Commission to draw a distinction between state-initiated human rights violations, such as extra-judicial executions, and tragedies that result from “faulty law enforcement.”
Although the Commission’s eventual report and recommendations are not judicially enforceable, they are a reminder of the international obligations that the U.S. has to eliminate domestic violence and protect victims and their children. Certainly, as students said, the Commission offers a valuable forum for human rights advocacy.
“This has been an opportunity for Jessica to speak for the community of women who survive violence,” Ezie said. 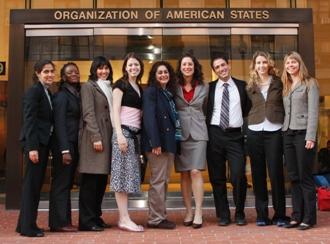