The 2019 Medal for Excellence honoree thrives on complex legal puzzles here and abroad while he remains deeply dedicated to Columbia Law. 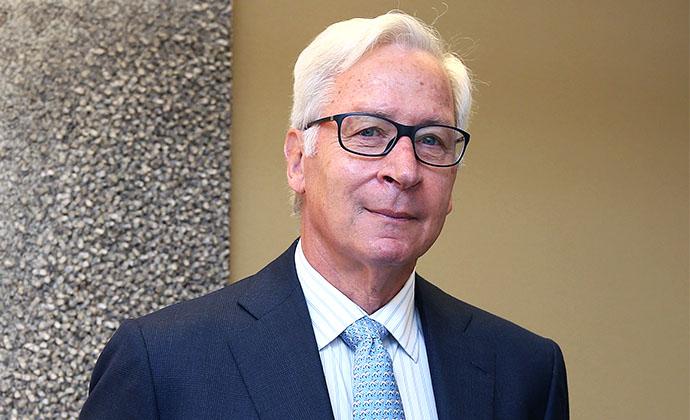 Nothing gives Jonathan D. Schiller a bigger rush than getting a phone call from a client with a thorny problem. In fact, he prefers one with high stakes and a high profile—the kind of complicated legal cases that Schiller, co-founder of Boies Schiller Flexner LLP, has been winning for decades.

“We want to do the most difficult work,” says Schiller CC ’69, LAW ’73, from his law firm’s new Hudson Yards office in New York City. “We want the cases that end up in trials, the hard cases. We don’t want to just write demand letters for clients.”

Schiller says a strong ethic of teamwork—something he learned playing basketball for Columbia College—has made the firm successful and enabled him to engage in complex commercial litigation and arbitration around the globe. It’s a quality he also brought to Columbia University’s Board of Trustees, which he chaired from 2013 to 2018. For his achievements in law and his service to Columbia, the Law School will present him the Medal for Excellence award on February 22 at Cipriani 42nd Street in New York City, along with co-honoree Nina L. Shaw ’79.

Schiller was practicing law at a boutique firm in Washington, D.C., when his client Westinghouse decided to assign a civil corruption case alleging bribery of Ferdinand Marcos, then the president of the Philippines, to David Boies at Cravath, Swaine & Moore LLP. Schiller had successfully defended the company through two prior U.S. grand jury investigations of the alleged corruption, so after the two met in the handoff, Boies suggested they team up on behalf of Westinghouse.

That arrangement led to a decade of working in tandem, a close friendship, and the decision, in 1997, to start their own firm. Boies Schiller began with six lawyers and now has 315, 33 of whom are Columbia Law graduates, including Schiller’s son Josh Schiller ’08. The firm has grown to 15 offices in the United States and London and has restricted its focus to litigation and arbitration. In a 2017 interview with his high school magazine, Schiller called the firm “one of the biggest fighting machines in the world.”

Schiller and the trial team “machine” have prevailed in billion-dollar cases involving financial giants Goldman Sachs, Barclays, and Bank of New York Mellon, as well as the New York Yankees, YES Network, and the DraftKings fantasy sports website. For Barclays, he recovered more than $9 billion in assets stemming from the 2008 purchase of Lehman Brothers’ brokerage operations. In an antitrust class action against bulk vitamin manufacturers, Schiller reached a record $1.05 billion settlement. And he won an arbitration against MSG Networks Inc. to free the New York Yankees from their broadcasting contract. The victory provided for the launch of YES Network, which quickly became the most successful regional sports network in the nation.

Schiller especially relishes his international arbitration work, which has taken him to tribunals in Switzerland, Cairo, Singapore, Paris, and Hong Kong, each with its own procedures and ways of doing business. “The cultural experiences have been fantastic,” he says. “You have to adapt and figure out the best way to present your case to persuade international arbitrators from varying legal systems to decide the merits for your clients. You can’t just pound your fist on the table to make your point.”

Setting the Stage at Columbia

Schiller arrived at Columbia from Washington, D.C., when the university was on the cusp of forcible change. A standout high school basketball player, he was part of Columbia’s 1967–1968 Ivy League championship team, playing with future Los Angeles Lakers star Jim McMillian.

Just weeks after the 1968 season ended, Columbia’s campus erupted in demonstrations. Students protested and occupied some campus buildings over the university’s defense research to assist the U.S. military in the Vietnam War, plus its plans to build a gym in Morningside Park. When Columbia’s trustees held a black-tie dinner for the championship basketball team, Schiller and his teammates made sure to use that opportunity to voice their opposition to the police on campus, who had been called to disperse students. The trustees listened to the team’s arguments and protest before they enjoyed the evening together.

The turbulence of 1968 “taught me about free speech and the boundaries of speech,” Schiller says. “It caused me to listen to people and pay attention, to be open to ideas and also to speak in order to protect things that we hold dear, like speech and the freedom of the press. Columbia represents opportunity, diversity, and high standards, and that was confirmed in the ’60s.”

Following his father and mother into the law, Schiller experienced what he calls his “first plaintiff’s case” during his first year at Columbia Law. In a clinical program headed by Professor Philip G. Schrag, Schiller and his classmates represented clients who had been defrauded by a large department store in New York City and pursued relief through administrative proceedings that permitted law student participation. “We explained to those who were injured their rights, their damages, and how we proposed to pursue their claims,” Schiller says. “Having a true client sitting in front of you focused your mind.”

“Responsibility . . . Beyond Our Borders”

Columbia remains at the center of Schiller’s public service, his philanthropy, and his family. He established the Jonathan D. Schiller Scholarship Fund at Columbia College and supported the Jonathan D. Schiller Fellowship in International Human Rights at the Law School. “As part of a global community, we have a responsibility for human rights beyond our borders,” Schiller says. “Human rights are indivisible and will not survive if the world outside our borders fails to recognize them. Something must be done, and this fellowship contributes to that effort.”

From Columbia College, he received the John Jay Award for professional achievement in 2006 and the Alexander Hamilton Medal for distinguished service in 2012. As Columbia University President Lee C. Bollinger ’71 said in his Hamilton remarks, “If you ever have to be a client—and nobody should want to be a client—you want Jonathan Schiller as your lawyer and your friend.”

Schiller served on Columbia University’s Board of Trustees from 2009 to 2018. When he became chair in 2013, Bollinger said Schiller is “deeply dedicated to Columbia and brings both great personal insight about the institution and admired professional experience.”

As a trustee, Schiller led the effort to establish a national model in policies, personnel, and research to address gender-based misconduct on campus. He also worked with Bollinger and the administration on the opening of the new $6.3 billion Manhattanville campus. “Manhattanville is the first great university campus to be built in a concentrated urban center in 100 years,” Schiller says of the new campus. “No one has done anything like it since Columbia built the Morningside Heights campus more than 100 years ago, and it will serve for Columbia’s growth for the next 70 years.”

A Saturday night might well find Schiller in the front row at a Columbia basketball game, cheering on the team and joking with the referee. And though he returns to campus as a confident, renowned attorney, having accomplished so much since he was a student, Schiller says he still gets the same thrill walking through the gates at 116th Street that he did decades ago.