Regulating Laws And Pollution In China

Regulating Laws And Pollution In China 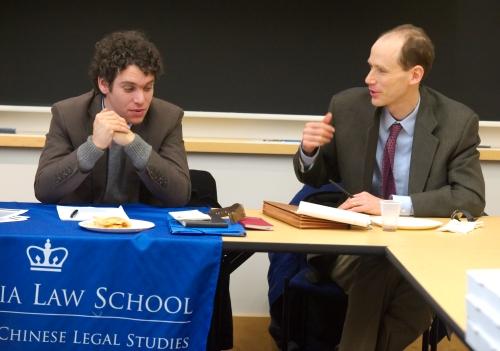 Benjamin van Rooij (left) gave a talk on environmental law in China at a panel sponsored by the
Center for Chinese Legal Studies, whose director is Benjamin Liebman (right).

December 8, 2008 (NEW YORK) – Columbia Law School students from across the United States and China crowded into William and June Warren Hall on November 18 to hear Benjamin van Rooij, Senior Lecturer at the Van Vollenhoven Institute at Leiden University, deliver his talk, “Regulating Laws and Pollution in China,” sponsored by the Center for Chinese Legal Studies at the Law School.

The need for Chinese environmental law policy grows more critical each day: Rapid industrial growth has produced endemic air and water pollution in the country over the past decade, and China now produces more pollution than other country on earth. Today the economic powerhouse has 16 of the 20 most contaminated cities on earth and pollution kills three-quarters of a million people there every year, according to World Bank figures.

Van Rooij maintains that the biggest problem in the regulation of Chinese pollution has been widespread noncompliance and weak law enforcement.

“Local governments controlling budgets have a say in appointments at environmental protection bureaus and frequently undermine local law enforcement to protect their own interests,” he said.

Yet van Rooij emphasized that Chinese environmental laws are evolving to cope with these problems.  He has used statistical data from 1998 to 2006 to evaluate changes in policy and found that in recent years legislation has gotten stricter and stronger, the number of cases brought by environment protection bureaus has grown, and average fines increased threefold.

Van Rooij also compared variations in central policy, pointing out that bureaus receive more resources and have a higher level education in personnel, and that numbers of staff are beginning to correlate with numbers of cases. Also, the regulated actors – the factories – have changed. Companies once had close relationship with regulators but today are more privatized, perhaps explaining the increase in government sanctions.

But community pressure has its limitations, van Rooij cautioned. Law enforcement that depends on local communities may not go after the worst cases. For example, most complaints about pollution concern noise rather than water pollution, even though the latter is significantly more harmful. This paradox cuts to the limitations of community pressure: It is vital to a reactive law enforcement strategy but under a proactive law enforcement strategy may carry little weight.

Van Rooij concluded that, overall, the Chinese government is paying much more attention to the today environment than in the 1990s. He gave as examples the new Water Pollution Prevention Control Law and the Air Pollution Prevention law currently in legislation. In a move that signals greater openness and commitment, China asked the United States National Resource Defense Council to advise on this; a decade ago the group would never have been directly involved.

Benjamin Liebman, Director of the Center for Chinese Studies at Columbia Law School, noted that van Rooij’s explanation of environmental law in China could describe general law enforcement there and wondered if anything van Rooij mentioned was unique to the environmental sphere.

Van Rooij explained, “Law enforcement, including execution of judgment in civil courts, and in other regulatory fields, is quite weak. Food safety, mining, product safety – all have weak capacity, and limited community action and involvement. But the environment, after 1996, became much more of an important political issue.”

Van Rooij responded that knowledge and detectibility are vital. Easily detectible pollution might prompt a rapid response, whereas a gradual build-up does not. He noted similarities to toxic waste clean-up in the Great Lakes regions of the U.S. during the 1960s and ’70s, which occurred only after years of pollution had changed public perception. “There is still very little ability for most people to deal with complex scientific questions and the hard questions that link disease and pollution,” he said.

Hong Zhang ’09 LL.M. from Shanghai questioned whether examples of detection and enforcement in Europe might translate to China.

Applying lessons from Europe to China is difficult because of the vastly different levels of freedom of expression, said van Rooij. But that also is changing. Lawyers are beginning to visit “hot spots” and “cancer villages” around China to find activists and rally support for environmental protections for citizens. The media can disseminate information to local people as well as focus attention on water, air and noise pollution.

Van Rooij concluded by speaking about the impact of the current economic crisis on environmental law in China. He thinks that the situation may actually benefit the environment in China: The most fiscally marginal companies are frequently the worst polluters, he said, and the tightening financial situation may serve to drive these “super-polluters” out of business.

Apart from research, Professor van Rooij is active as a lecturer, teaching courses in Chinese Law, Legal Systems Worldwide, Law and Culture, Law Governance and Development, and Anthropology of Law at Van Vollenhoven Institute. Currently a member of the Van Vollenhoven’s management team, he is also coordinator of its teaching programs and China projects.

— Kristie Hart
Columbia Law School, founded in 1858, stands at the forefront of legal education and of the law in a global society. Columbia Law School joins traditional strengths in international and comparative law, constitutional law, administrative law, business law and human rights law with pioneering work in the areas of intellectual property, digital technology, sexuality and gender, and criminal law.