Race in the Era of President Obama

Race in the Era of President Obama

By Paul Wachter
Visiting scholars, civil rights leaders, and Columbia Law School professors assembled at Jerome Greene Hall last week for discussions on race in America after the historic election of the country’s first African-American president.
On Friday, April 3, the Black Law Students Association hosted the 15th Annual Paul Robeson Social Justice Conference, a day-long examination of the question: “Thinking Outside of Race: Are We Ready?” 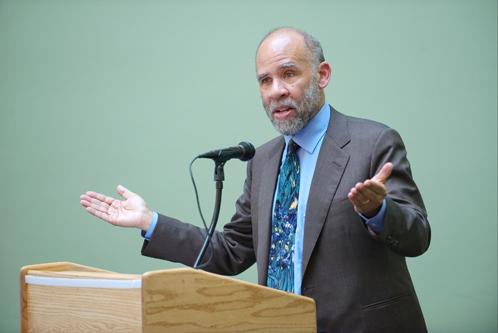 “We’re not a post-racial society,” said keynote speaker John Payton (above), Director-Counsel and President of the NAACP Legal Defense Fund, and his assessment was echoed by each of the day’s speakers.
VIEW PAYTON'S KEYNOTE ADDRESS HERE
Each acknowledged the significance of President Barack Obama’s electoral victory. His accomplishment was to re-shape the conversation of race in this country, said Kendall Thomas, Columbia Law School’s Nash Professor of Law and Director of the Center for the Study of Law and Culture. “He didn’t play the race card — I hate that phrase — he reshuffled the deck.”
For much of the country’s history, with the sanction of the U.S. Supreme Court, African-Americans had been denied rights given to other Americans, Thomas said. “Black people born in America, though citizens, were not fully human in the sense that Italian, Irish, and German immigrants could be under our laws. There was this distinction between race and ethnicity.”
During his presidential campaign, “Obama’s genius was to suture ethnicity and race,” in a way that had not been accomplished previously, Thomas said. “But just because President Obama won the election, it doesn’t make the issue of race moot in this country.”
Much of Friday’s discussion focused on the role race played — and to what degree it should play — in admissions policies at the nation’s public institutions of higher learning. Several states — California, Washington, Michigan and Nebraska — have passed ballot initiatives ending racial preferences in admissions policies. The initiatives’ proponents argue that such measures unfairly keep better-qualified applicants out and stigmatize all underrepresented minorities, no matter their individual qualifications, as undeserving. Why should matters of race trump class or other considerations, they argue.
“The initiatives take the language of the civil rights movement and hijack that language,” said Columbia Law School Professor Theodore M. Shaw ‘79, who served as Director-Counsel and President of the NAACP Legal Defense Fund from 2004 to 2008. The de facto purpose of such initiatives is to keep underrepresented minorities (African-Americans and Latinos) out of the nation’s top public universities, he continued. (Private universities need not conform to state ballot initiatives.)
After Proposition 209 was passed in California in 1996, the state “lost a decade of progress,” said Sheila O’Rourke, Assistant Provost of the University of California, Berkeley. In 1995, underrepresented minorities represented 21 percent of the state university system’s undergraduate admissions. After Proposition 209 was implemented, eliminating race as a factor, that number fell to 15 percent. Similar drop-offs were seen in graduate admissions and faculty hiring.
Two days earlier, on Wednesday, April 1, Shaw debated the role of such ballot initiatives with Curt Levey, Executive Director of the Committee for Justice, in an event sponsored by the Clifford Chance Thought Leadership Initiative on Diversity. Shaw and Levey are “familiar sparring partners,” in the words of Columbia Law School Dean David M. Schizer, most often over a 2003 case Shaw argued before the U.S. Supreme Court — Gratz v. Bollinger, in which the court upheld race as among the factors that could be considered in the University of Michigan’s undergraduate admissions.
“We have a black president, so I think it’s a fair question to ask just how racist the United States is today,” said Levey. “And if minorities can compete, why would you want to stigmatize them with preferences?” Levey pointed to studies that show that underrepresented minorities who would not otherwise have gained admittance to law schools were more likely to drop out or fail the bar exam.
“I’m a fan of race-neutral admissions policies that take into account other factors, including socio-economic, when determining admissions,” he said. In states where anti-affirmative action ballot initiatives have passed, universities have still been able to enroll unrepresented minorities at a comparable rate, he added. (O’Rourke’s figures disputed this.) “What you have, though, is a cascade effect, where less get into the top schools, which isn’t necessarily bad,” Levey said. 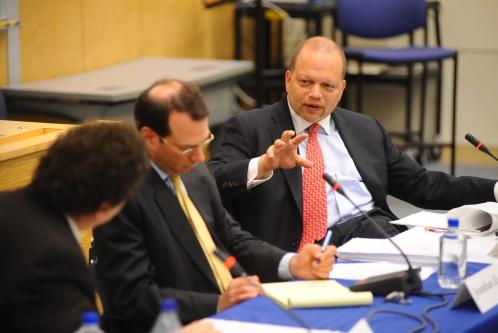 “I have a problem with the cascade effect,” countered Shaw (above, right). “Placement at these top universities opens doors in ways that don’t always happen at lesser schools.” He agreed that socio-economic factors should also play a factor in admissions. “But the vast majority of poor in this country are whites, so there’s no guarantee that just factoring in class would mean you’d get people of color in.”
African-Americans have been adversely affected by structural racism for many years as well as “internal demons,” Shaw allowed. “I think diversity is important, and I don’t think there’s a good reason to exclude race from all the other factors that constitute diversity,” he said. 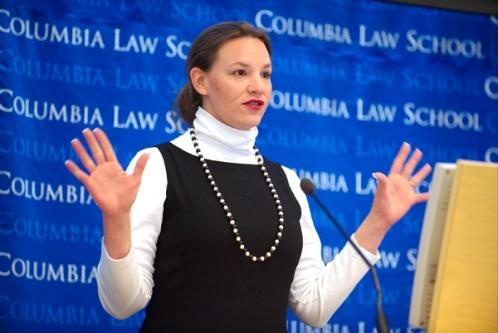 Many of Friday’s participants in the Robeson conference focused on tactics that could be useful in thwarting state ballot initiatives seeking to end affirmative action. Nebraska State Senator Danielle Nantkes (above) said the best tactic was to stop the initiatives from getting on the ballot. In several states, opponents of the initiatives have mounted successful legal challenges, alleging fraudulent signatures and other technicalities.
Another tactic, Shaw said, was for opponents to introduce their own initiatives, mirroring the language of the anti-affirmative action advocates. “If you have a whole bunch of ballots saying the same thing, none is likely to pass,” Shaw said, adding that this approach might be “too Machiavellian” for some.
Payton, the keynote speaker, said the country was now facing more significant threats to racial justice than state ballot initiatives. He noted that Colorado, which leans Republican, recently voted against an anti-affirmative action ballot initiative. “We may be at a turning point in that regard, and I doubt that California would approve the ballot today as it did in 1996.”
More pressing, he said, are two cases currently before the U.S. Supreme Court. In the first case, Northwest Austin Municipal Utility District Number One v. Mukasey, the Austin, Texas, district argues that it is entitled to skirt Section 5 of the 1965 Voting Rights Act, which Congress extended in 2006. Section 5 pertains to 16 states, mainly in the South, that have had long histories of racial discrimination. “Under Section 5, before a jurisdiction can change a voting procedure or practice in one of these states, it must be reviewed and cleared by the U.S. Justice Department,” Payton explained. “In the case of the Texas jurisdiction, they’re arguing that Section 5 is intrusive and outdated.”
But in fact, Payton continued, in recent years the Justice Department “has had to strike down hundreds of proposed changes.”
“The state of Louisiana has never passed a redistricting plan that’s cleared the Department of Justice,” he said. “Without Section 5, there would be shocking change in the Deep South, and it would be a huge setback.”
In the second case, Ricci v. DeStefano, New Haven’s Fire Department issued a test for career advancement, but when 14 out of 15 of the top scorers were white (and the other was Latino), the city rejected the scores and offered no promotions. Ricci, who is white, and 19 other firefighters sued the city, charging reverse discrimination.
“But was the test fair?” asked Payton. “New Haven, like many other fire departments throughout the country, had fought integration tooth and nail,” he said. The Constitution and Title VII of the Civil Rights Act say that employers may not discriminate on the basis of race, but the courts have also ruled that employers may not hire or promote using standards that have a disparate effect on minorities.
“These two cases, unlike the ballot initiatives that are a state-by-state process, affect everyone and may have a huge impact,” Payton said.
“It’s no doubt that we’ve accomplished a lot since Paul Robeson’s time, when white supremacy was part of the mainstream,” he said, invoking the name of the conference’s namesake. Robeson ’23, who died in 1976, paid his way through Columbia Law School by playing professional football, and was a renowned actor and singer as well as a vastly influential social justice advocate.
“Obama’s election certainly speaks to that,” Payton continued. “But when you’re studying how a country handles race — for instance, how France deals with its immigrants from North Africa and elsewhere — you should look at how its education system works, look at jobs and housing and political participation. You don’t just look at their Minister of Justice, who is of North African descent, and stop with that. That’s backwards.”
“By that measure, while there’s significance in Obama’s election, it’s not the whole story,” Payton said. “There’s a lot more that this country needs to do.”