July 17, 2008 (NEW YORK) – Columbia Law School student John B. Quigley ’10 has been named the recipient of the Kelley Drye & Warren LLP Scholarship administered by The New York Bar Foundation. The $10,000 award is available to second-year students at Columbia Law School who have at least a B average and intend to practice law in New York State. 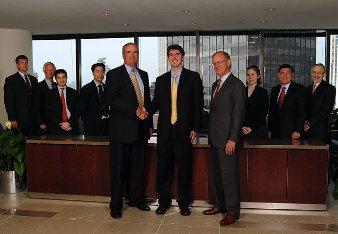 
During his first year at Columbia, Quigley served as Career Symposium chair of the Columbia Society of International Law and as training coordinator for the Unemployment Action Center, where he represented unemployed workers seeking benefits. This summer, he is interning in the organized crime division of the United States Attorney’s Office in the Eastern District of New York. His long-term plans focus on litigation.

Since 2006 the Kelley Drye & Warren LLP Scholarship has been directed toward a student at Columbia Law School, which selects the recipient.