Professors Matthew Waxman (above, left), Tim Wu (above, right), and Ted Shaw (above, center) ran the live auction, leveraging their lawyerly skills and persuasive powers to drive up bids on stays in vacation houses; opera, theater, and sporting events tickets; and home-cooked meals and dinners in New York City restaurants with professors.
Half of the money from PILF’s auction provides grants to non-profit legal organizations that apply to PILF’s Community Grants Program. The other half supports the Law School’s guaranteed summer funding, which gives all Columbia Law School students stipends to work for a qualified public service organization during their first-year summer.
Proceeds from the auction are still being tallied. Last year’s auction raised a record of more than $80,000.
“I really want this event to succeed,” said Wu as he prepared to take the stage of Roone Arledge Auditorium. In addition to auctioneering, he donated two portrait sessions in his photo studio. Noting the auction’s support for student stipends, he said, “What you do your first-year summer can change your life.”
One student who can attest to that is Jean Zachariasiewicz ’10, the PILF president for 2008-09. Zachariasiewicz spent her 1L summer at Reprieve, an organization doing Guantánamo defense work, which gave her hands-on experience with the many issues surrounding detention and terrorism. She was able to take advantage of the opportunity with support from the Human Rights Internship Program, a specialized funding stream that, along with the guaranteed summer funding program, allows Columbia Law School students to work in public interest.
“Funding makes it possible for Columbia students to take jobs around the country and the world that they couldn’t otherwise afford. Not only do we gain valuable experience, but we are able to contribute to organizations and communities that are often strapped for resources and manpower,” Zachariasiewicz said. “I was thrilled to see that the current economic climate didn’t suppress enthusiasm for the PILF auction, so that we can continue our involvement in needed programs like guaranteed summer funding and Community Grants.”
The festive evening began with a soprano saxophone performance by Keyan Williams, a jazz musician and friend of the Law School, who also donated his CD to the auction. Students, alumni, professors, and members of the Columbia community enjoyed food, drink, and good company as they circled confetti-strewn tables to bid on items in a silent auction.
Those prizes included iPods; gourmet treats donated by local businesses and by culinarily inclined students; theater and sporting event tickets; language lessons; hand-made jewelry courtesy Law School alumna Minna Schrag ’75; and lunch with David M. Schizer, Dean and the Lucy G. Moses Professor of Law, who was one of many faculty members to attend the event.
In the live auction, two martini clinics with Professor Philip Bobbitt ultimately sparked bidding wars between clusters of eager students. The first sold for $525 and the second for $550.
The high bid of the night was a weekend getaway at the Nantucket home of Professors Robert and Elizabeth Scott, which went for $1775. Close behind it was a weekend in East Hampton at Lecturer-in-Law Cynthia Epstein’s country home, won by a group of alumni from the Class of 2008. 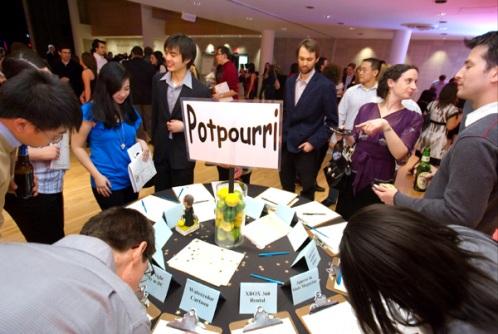 On one of two silent auction tables marked “Potpourri,” a bobblehead doll of U.S. Supreme Court Justice Antonin Scalia sold for $115. The springy-headed figurine of the justice stands atop a 2nd edition Webster’s Dictionary, holding U.S. Reporter 483 in one hand and spearing a lemon with the other, and with a howling wolf at his side. The iconography prompted debates among bidders, who decoded the lemon (Scalia’s criticism of the Lemon test) and the dictionary (which he cites frequently) but had more trouble with the wolf.
Christine Louie ’09 outbid her peers – including Peter D’Angelo ’11, who said he will play Justice Scalia in this year’s Law Revue – to take home the bobblehead of the Supreme Court justice whose opinions she most enjoys reading.
“Even though I don’t always agree with them, he’s very funny, and he’s the best writer,” Louie said. She later looked up the wolf and found it a reference to Scalia’s dissent in Morrison v. Olson, which upheld the Independent Counsel Law. Unlike a wolf in sheep’s clothing, “This wolf comes as a wolf,” he said of the law.
“Whoever bought [the doll] for a mere $115 got it for a bargain,” said Professor Nathaniel Persily, who donated the doll, a limited-edition item made by the entertaining law review Green Bag. “It is probably worth three times that.”
Additional support for the auction came from the law firms Arent Fox; Akin Gump Strauss Hauer & Feld; Bingham McCutchen; Cleary Gottlieb Steen & Hamilton; Dewey & LeBoeuf; DLA Piper; Fried, Frank, Harris, Shriver & Jacobson; Fulbright & Jaworski; Jenner & Block; Kirkland & Ellis; Latham & Watkins; Morrison & Foerster; Paul, Weiss, Rifkind, Wharton & Garrison; Proskauer Rose; Simpson Thacher & Bartlett; and Troutman Sanders.
The Public Interest Law Foundation at Columbia is an independent, non-profit corporation of law students, faculty, alumni and friends. Founded in 1980, it raises money through membership dues, donations, bookstore sales, and the annual auction to support and promote the practice of public interest law at Columbia and across the country. 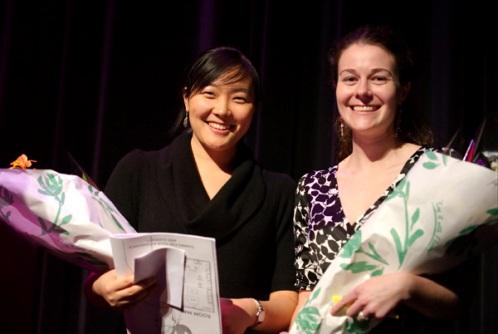