Media contact: Sonia von Gutfeld 212-854-1453 [email protected]
Public Affairs Office 212-854-2650 [email protected]
New York, May 5, 2009 — Many Law School students use their years at Columbia not only to earn a J.D. but also to devote substantial energy toward pro bono projects and strike paths toward public service careers. The Social Justice Program (SJP) recently honored some of these outstanding students, as well as the Law School community that supports them, at its annual Public Interest Awards Dinner.
SJP Awards to Students

Anne Gell ’09, who after graduation will work at Sanctuary for Families in New York as a Kirkland & Ellis Fellow, was named Outstanding Public Interest Student of the Year. The award recognizes a student who has shown extraordinary commitment to public interest both at the Law School and beyond, and as a student and future public servant. Gell has volunteered for New York Lawyers for the Public Interest, The Legal Aid Society’s Immigration Law Unit, Human Rights Watch, and the City Bar Justice Center among other organizations.

Amy McCamphill ’09 received the Joseph Haaf Award for Excellence in Pro Bono Service. McCamphill has advocated for some of New York City’s most vulnerable residents through the Legal Clinic for the Homeless and the Prison Education Initiative, and has advocated for animal rights with the Humane Society. The award’s namesake, Joseph W. Haaf ’93, was instrumental in establishing and promoting the Law School’s Pro Bono Program.

The Ellen P. Chapnick ‘Make It So’ Award went to Laura Gleen ’09, the national president of IMPACT, a national nonpartisan network of law students who work to ensure the integrity of the voting process. SJP said that Gleen brings “collegial problem-solving, intensity of purpose and contagious can-do spirit” to a range of projects at the Law School. Created by her colleagues, the award is named for Ellen Chapnick, who founded Social Justice Initiatives.
Student-Given Awards

Students named Professor Olati Johnson the Public Interest Professor of the Year, calling her a “role model for aspiring public interest lawyers, and generally for all students.” Prior to joining the Columbia Law School faculty in 2006, Johnson clerked for the Supreme Court, did a Skadden Fellowship at the NAACP Legal Defense Fund, served on the U.S. Senate Judiciary Committee, and worked at the ACLU National Legal Department.

Students also gave their fellow colleagues awards for outstanding service. Kathryn Scheinberg ’09, who after graduation heads to the Center for Children’s Advocacy as an Equal Justice Works Fellow, received the Public Interest Peer of the Year Award. Scheinberg has been active in the Public Interest Law Foundation, the Human Rights Law Review, and the Child Advocacy Clinic at the Law School, and spent her summers at Legal Aid and the Children’s Law Center.

IMPACT, the non-partisan group that organized volunteer poll-monitors and voter advocates around the country during the 2008 primaries and general election, earned the New Student Initiative of the Year Award.

The annual dinner highlights the public service work of a Columbia Law School graduate. The keynote speaker this year was Juan Cartagena ’81, general counsel to the Community Service Society.

Columbia Law School also honored the 23 graduating students who will do full-time public service work after graduation. Several of them will use fellowships to do their dream projects at organizations such as Western Massachusetts Legal Services, Sanctuary for Families, the ACLU, the Center for Children’s Advocacy and Human Rights Watch. Others will work at governmental agencies such as the U.S. Department of Justice and the Manhattan DA’s office. Some will become staff attorneys at private public interest law firms around the country and some will be judicial clerks. The Law School’s Loan Repayment Assistance Program makes it economically feasible for its graduates to pursue these jobs of their choosing.
Accolades went to 46 members of the Classes of 2009 and 2010 who have or who will have spent two summers in public interest. Since 2008, Columbia Law School has guaranteed funding for all first- and second-year students who do public interest summer internships.
Also commended were the 97 students who have performed 75 or more hours of pro bono work. Students have volunteered their talent and time in government, impact litigation and legal services groups, advocacy organizations, and Law School clinics.

Columbia is one of a small group of law schools that require students to undertake pro bono work, a program that grew out of a student initiative and continues to be shaped by student interests and needs as well as requests by public interest lawyers and organizations. Most students exceed the 40 pro bono hours required to graduate.
Students who led efforts to raise funds for public interest legal work received Philanthropy Awards. Those students are Jisoo Kim ’10 and Erin Richardson ’10, who co-chaired this year’s Public Interest Law Foundation Auction, and Colin Calvert ’10, Dimia Fogam ’10, and Craig Greiwe ’09, who co-chaired the Deans’ Cup, a basketball game fundraiser between the law schools of Columbia and NYU. 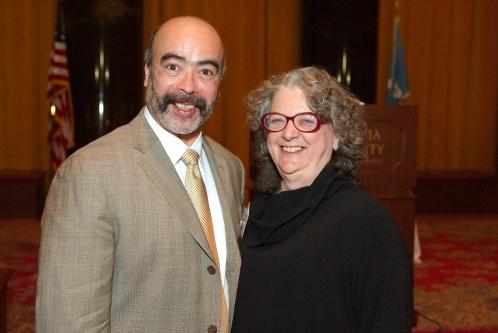