Associate Professor Robert Jackson, Jr., a former advisor at the U.S. Department of Treasury/ Office of Special Master for TARP Executive Compensation, testified at 2:30 p.m. EDT on federal oversight of banker pay at a subcommittee hearing of the Senate Committee on Banking, Housing and Urban Affairs on Federal Oversight of Banker Pay. Jackson discussed bonus practices at large financial institutions, the role these practices played in the financial crisis, gaps in current federal oversight of banker pay, and needed reforms.
“Congress and the Administration provided federal regulators with the sweeping authority they need to ensure that bankers do not have incentives to pursue short-term gains that could compromise systemic stability,” Jackson told the legislators. “The new rules on banker incentives are, however, inadequate to the regulators’ critical task. More diligence from Congress, from the Administration, and from the regulators themselves is needed.”
Professor Robert Jackson, Jr. (Photo by Jay Mallin.)
Jackson’s testimony is available here and video of the hearing is available here. 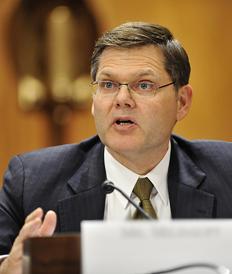 Professor Curtis Milhaupt testified at 1:45 p.m. EDT about policy options for addressing Chinese state-owned enterprises before a hearing held by the U.S.–China Economic and Security Review Commission. Congress established the Commission in 2000 to report on the national security implications of the bilateral trade and economic relations between the U.S. and the People’s Republic of China.
Milhaupt, the Parker Professor of Comparative Corporate Law, Fuyo Professor of Japanese Law, and director of the Center for Japanese Legal Studies, recently co-authored a paper on the mechanisms of state capitalism in China. He is a leading expert on Asian legal systems and comparative corporate governance.
Professor Curtis Milhaupt. (Photo by Jay Mallin.)
Milhaupt's testimony is available here and a transcript of the full proceedings will be available here after several weeks. Video of the U.S.-China Economic and Security Review Commission's entire hearing is available here.