CLS Professors Bring Clinical Legal Education to Eastern Europe, China and Latin America
By MIRIAM FURMAN
February 21, 2008 (NEW YORK) -- While clinical legal education in the United States has been around for four decades, it is relatively novel in new democratic nations such as Poland, the Czech Republic and the Ukraine.  Demand for help in establishing clinical legal education remains strong in Eastern Europe and also continues to grow in China and Latin America, all places where Law School faculty have been active for years in sharing their expertise. 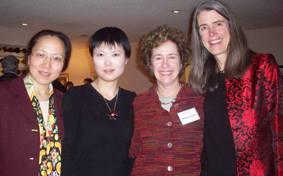 Professor Barbara Schatz (second from right) with participants
at a clinical legal education program she attended in China.
Last October, three faculty members addressed law school colleagues at a colloquium in Bialystok, Poland, called the Next Step Forward in the Development of Clinical Legal Education. Professor Barbara Schatz, who teaches Columbia’s Non-profit Organization/Small Business Clinic, and Professor Carol Liebman, director of its Mediation Clinic, spoke about their respective areas of expertise, while Professor Philip Genty lectured on the value of moot court competitions to train students on how to write briefs and present arguments. At other conferences, Genty has also shared experiences about the Prisoners and Families Clinic, which helps prisoners protect their parental rights and which he has headed for years.
Columbia Law School has eight clinics, while nine exist at universities in all of Poland. Nevertheless, Poland’s law clinics have enabled several hundred students to work on several thousand cases since the first clinic was established 11 years ago.
Not everything about clinical legal education translates from the United States to other nations, according to the professors.
“In Russia, students are permitted to provide many services, including representing clients in court, but in Poland, they can’t go into court at all,” Schatz explained.
A problem clinics sometimes face in some countries is hostility among practitioners who fear competition from clinics, she added.
In addition, European legal education differs from the U.S. in that students study law as undergraduates, although some countries are moving towards a three-year undergraduate degree and a two-year master’s degree program in law.
Despite these differences, Ellen Chapnick, Dean of Social Justice Initiatives, has taken legal education to new frontiers in Latin America. She has consulted extensively in the region since 2003 when she attended a meeting of the Network of Latin American Public Interest Clinics in Bogotá, Colombia.
“I was the only person from a U.S. law school involved,” she said.
Chapnick helped organize a workshop in 2006 in Argentina to instruct clinical teachers and last semester spoke about the role clinical legal education plays in preparing students for social justice work at the Network of Latin American Public Interest Clinics meeting in Mexico City.
“Many Latin American countries still are emerging democracies and are developing new legal systems and cultures,” Chapnick said.
Columbia Law School faculty has also been particularly active in Asia. Professor Suzanne B. Goldberg, who heads the Sexuality and Gender Law Clinic, has lectured and consulted in China. Last August, she took part in the International Clinical Legal Education and Legal Profession Forum in Beijing where she described her clinic’s broad view of gender-based harms with its focus on the rights of women, lesbians, gay men, bisexuals and transgender individuals. Although some Chinese law school clinics focus on women’s rights, none currently takes up issues related to discrimination and violence based on sexual orientation and gender identity.
Liebman has made four trips since 2000 to work with clinical faculty at several Chinese law schools, explaining and demonstrating clinical teaching methodology as part of a Ford Foundation-funded project.
Schatz, who serves as director of clinical legal education at the Law School, has also taught in China. She is training faculty at San Andres, a new law school in Buenos Aires, Argentina, this semester, and will soon travel to the countries of Georgia and Armenia.
Along with the all-important teaching of skills, strategy, ethics and a vision for social justice, Columbia faculty aim to help students develop judgment. Clinics are particularly well suited to the task, Goldberg said, because they offer real-life experience – with the benefit of supervision.
Genty also noted the mutual benefits of clinics to law schools and to the communities they operate in.
“By working in clinics, students develop the skills they need to listen to clients and advocate on their behalf,” Genty said. “The clinics also play an educational role by running workshops to inform sectors of the public about laws in their field that they need to know.”