Professors Analyze Latest Developments in Legislative and Statutory Interpretation
Media Contact:
Public Affairs, 212-854-2650, [email protected]
New York, April 25, 2011—Sweeping new laws, such as the health-care reform legislation, have provoked much discussion over how and by whom these measures should be interpreted.
As a Columbia Law School roundtable on legislation and statutory interpretation recently proved, there are many stimulating questions, but few easy answers. 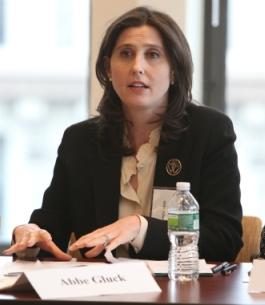 Regarding the health law, Associate Professor Abbe Gluck, left, who co-led the April 8 roundtable, said “modern statutes bring with them increasingly complex questions about federalism” and the relationship between state and federal agencies in the implementation of federal statutory law.
“Using state implementation might be a way for the (federal) government to acknowledge that there is still a role for states, even in areas where states once dominated,” said Gluck, a health policy expert.
In an upcoming Yale Law Journal essay, Gluck argues that state governments are “squarely in the midst of creating, implementing and interpreting federal statutory law,” citing not only the role of state implementers but also the fact that state courts hear more federal statutory cases than federal courts.
Gluck said more federal statutory interpretation--including the health law—is being done by state officials who Congress intends to interpret those laws, but that legal doctrine has not made accommodations for this development. “Modern legislation is both more complex and more aspirational than the major laws of earlier times—in sense that Congress increasingly leaves important policy details not only to administrative agencies, but also to many nonfederal actors” Gluck writes.
Several Columbia Law School professors took part in the roundtable, including Associate Professor Olati Johnson, right, who spoke about the role states can play in enforcing federal civil rights statutes, and Richard Briffault, who spoke about lobbying regulation. 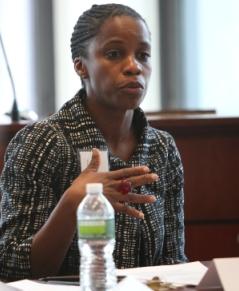 Also presenting their work were professors Kent Greenawalt, who discussed a chapter on statutory interpretation from his forthcoming book, and Thomas Merrill, who presented an argument for synthesizing three prevailing theories of interpretation. In addition, professors Peter Strauss, below, and Gillian Metzger each moderated a panel and provided commentaries on several of the works presented. 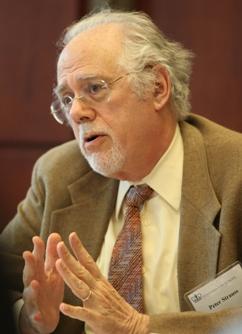 # # #
Columbia Law School, founded in 1858, stands at the forefront of legal education and of the law in a global society. Columbia Law School joins its traditional strengths in international and comparative law, constitutional law, administrative law, business law and human rights law with pioneering work in the areas of intellectual property, digital technology, sexuality and gender, criminal, national security, and environmental law.
Visit us at http://law.columbia.edu
Follow us on Twitter http://www.twitter.com/columbialaw