The Columbia Law School alumnus, former associate White House counsel, and 2011 Teacher of the Year, will take the helm at NYU
on June 1.
New York, April 4, 2013—Trevor W. Morrison ’98, a leading expert on constitutional law, federal courts, and national security law, will leave the Columbia Law School faculty on June 1 to become the Dean of New York University School of Law.
Morrison, who is Columbia Law School’s Liviu Librescu Professor of Law, joined the Law School faculty in 2008 after teaching at Cornell Law School. Prior to entering academia, he clerked for U.S. Supreme Court Justice Ruth Bader Ginsburg ’59 and for Judge Betty B. Fletcher of the U.S. Court of Appeals for the 9th Circuit. Morrison also served as a Bristow Fellow in the U.S. Justice Department’s Office of the Solicitor General, as an attorney-advisor in the Justice Department’s Office of Legal Counsel, and as an associate at Wilmer, Cutler & Pickering.
In 2009, Morrison took a leave from the Law School to spend a year at the White House as associate counsel to President Barack Obama. He advised the president on national security law and constitutional law matters. “On the first day and the last day and every day in between, it was both a great honor and very exciting to be working at the White House,” Morrison said shortly after leaving his post in the Obama administration. “When I began there, I hoped I would not take it for granted. And over the course of a year I don’t think I did.”
Upon returning to Morningside Heights, Morrison served as vice dean of the Law School in 2010, and then served as chair of the Law School’s entry-level appointments committee. He also became faculty co-chair of the Roger Hertog Program on Law and National Security and later helped establish, and co-directed, Columbia Law School’s Center for Constitutional Governance, which is devoted to the study of governmental structure, sovereignty, and separation of powers issues. 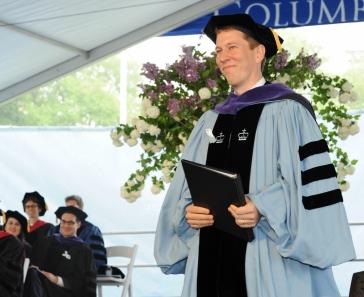 Morrison was awarded Columbia Law School’s Willis L.M. Reese Prize for Excellence in Teaching by the Class of 2011. Upon accepting the award during the 2011 graduation ceremony, Morrison told those in attendance how much he enjoyed the time he spent as a student at the Law School. After noting that Columbia Law School graduates “are leaders in every part of the legal profession, in virtually every part of the world,” he spoke passionately about the benefits and rewards of public service. “To function effectively and fairly, to promote the general welfare as well as individual justice, to be an institution of laws and not of men, government requires lawyers,” he told the graduates. “Good lawyers. Government is a creature of law, but the laws that create and constrain governments are only as good as the lawyers attending to them.”
Shortly after the announcement on the deanship, Morrison reflected on his time at the Law School. “I love Columbia Law School,” he said. “Ever since I first arrived here as a student, it has been my home in the law. The faculty, students, and staff here are my colleagues, my mentors, and my friends. Although I am excited to embark on this next stage in my career, I will always have a deep appreciation and affection for Columbia.”
“This is a bittersweet moment for us,” said David M. Schizer, Dean and the Lucy G. Moses Professor of Law; Harvey R. Miller Professor of Law and Economics. “Trevor is a magnificent colleague and a great friend. We are sad to see him go but, of course, we are very proud of him and wish him every success in taking on these new responsibilities.”