New York, March 6, 2012—The World Economic Forum announced today that Columbia Law School Professor Tim Wu has been selected as a 2012 Young Global Leader. The honor comes as Wu returns to the Law School after serving as a senior adviser to the Federal Trade Commission (FTC). 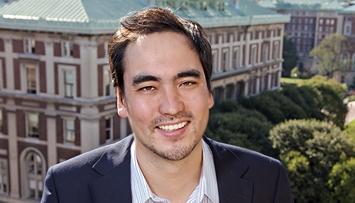 Wu has long been hailed for his groundbreaking scholarship on network neutrality law and issues of Internet freedom. Following the wide acclaim generated by his book The Master Switch: The Rise and Fall of Information Empires, which focuses on the history of modern communications, the FTC asked Wu to join the agency to work on issues he has championed, as well as those he has criticized.

During his time at the FTC, Wu’s foremost objective was to help the government with emerging regulatory policies and cases involving the Internet and mobile markets. He worked on three main projects during his 11 months of service. First, he led an internal agency working group examining cutting-edge antitrust and privacy issues. He also worked on private and disclosed investigations of tech companies, including the FTC’s investigation of Google. A third major project remains confidential, in keeping with FTC policy.

During weekly brainstorming sessions at the agency, Wu brought together a mix of lawyers, economists, and computer scientists, including the heads of FTC enforcement divisions. The mission, he recalled, was “to try to figure out how we wanted to deal with emerging competition and privacy problems in high-tech platform industries.”

The actions of companies such as Google, Facebook, eBay, Amazon, and Apple are creating novel and groundbreaking antitrust and privacy questions, according to Wu.

“Some of these companies have achieved dominant positions, and some extract huge amounts of user data as part of their operations,” Wu said. “And the basic question is what should the agency—and by extension, the federal government—do, if anything, about the power of emerging platforms.”

Working at the FTC reinforced Wu’s views about the role of government. “I don’t believe in excessive government regulation, but I do believe in government oversight,” he said.

The U.S. faces the reality of enormous concentrations of private power, according to Wu. As a general rule, he continued, “I have come to think that all great power must be balanced by countervailing power. The basic idea in the U.S. Constitution is a good one.”

Inspired by his work at the FTC, Wu is stepping up his academic writing on antitrust issues and has recently finished two new papers: “Taking Innovation Seriously” and “Parallel Exclusion.” The latter was co-authored by antitrust scholar Scott Hemphill. Wu is also teaching a new course, The Media Industries: Public Policy and Business Strategy, in collaboration with Jonathan Knee, an adjunct professor at Columbia Business School. Wu is also working on a proposal for his next book.

As a champion of self-expression, Wu is happy about being able to speak his mind publicly again. “The greatest thrill of leaving government is being able to say whatever you want,” he said.

Looking back, Wu said he immensely enjoyed public service and his role as a regulator. “I loved it,” he said. “I had a terrific time at a great agency.”