ELECTION LAW EXPERT PROFESSOR NATE PERSILY IS BRACED FOR OCTOBER SURPRISES
Lecture to Alumni at the St. Regis Hotel
Press contact: Erin St. John Kelly [email protected]
Office 212-854-1787/cell 646-284-8549/Public Affairs Office 212-854-2650
October 13, 2008 (NEW YORK) – Professor Nathaniel Persily has a simple hope for November’s highly anticipated presidential election. His is a nonpartisan expert’s wish to avoid the sort of divisive legal entanglements that have rattled and split the American political system in recent elections.
“God, whatever happens, don’t let it be close,” Persily said. “Because that’s when we get into the margin of litigation. And while it leads to a lot of articles for me to write, it’s not terribly good for the country.” 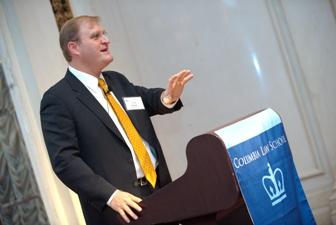 Persily (above), an expert on election law who joined the Columbia Law School faculty in 2007, spoke at length Tuesday evening at a lively alumni event at the St. Regis Hotel about the political and legal dimensions of the presidential election. More than 250 alumni and guests spanning more than 70 years—from the classes of 1936 to 2007—registered for Persily’s talk, held in one of the Midtown hotel’s ballrooms.
“It’s great to interact with people who have come from the same place you have,” said Sam Lowery ’07 before Persily’s talk. Lowery, a litigation associate in securities fraud at Cravath, Swaine & Moore LLP, won’t be voting in this election because he’s a New Zealand native who’s not a U.S. citizen. All the same, Lowery said the U.S. election is both unavoidable and critical for everyone. “I live here, and even though I can’t vote, it affects people everywhere,” he said.
Persily covered significant ground in his remarks Tuesday evening, delving into America’s “incredibly complicated electoral environment” that is “gripping our collective conscious these days,” and the uniqueness of a presidential election in which no incumbent president or vice president is on the ballot, record numbers of new voters have registered, and several contenders for their party’s nomination have been either women or members of ethnic or religious minorities.
All these unprecedented circumstances, Persily said, “make it extremely difficult to analyze what is going to happen.”
“It is still, I think, very close,” Persily said, noting that Sen. Barack Obama’s lead of five to eight percentage points over Sen. John McCain in recent polls may be misleading. “Those who have said it is over…I think are wrong.”
Because the electorate is changing so fast and in so many ways, Persily said, many conventional assumptions about voting populations may make polls and predictions in this election less than accurate. There’s the issue of white respondents potentially lying to pollsters about their willingness to vote for a black candidate, people who declare to pollsters that they’re undecided being a lot closer to a determination than they admit, likely black turnout being forecast too low and the fact that pollsters don’t call cell phones—which have, for at least two percent of the electorate, replaced landlines entirely.
Among the key groups to watch in the coming weeks, Persily said, are Hispanic voters, former supporters of Hilary Clinton, and absentee voters who will cast 40 percent of the votes in critical states like Colorado, Montana and New Mexico. Those states, like several other battlegrounds, all have Democratic governors, Persily noted, which should help Obama, who has been able to piggyback on the incumbent governor’s political apparatus in many of those swing states. Not to mention the economic crisis and generally unfavorable attitudes toward the incumbent Republican president.
“You put those two factors together and this is a huge democratic year,” Persily said. “Obama should be sailing through.”
And yet, Persily warned, he is not, and shouldn’t be crowned the winner quite yet. He said, any number of “October surprises” could still pop up and drastically affect the dynamics of the race.
The event at the St. Regis, which ended about an hour before McCain and Obama shared a stage in Nashville, Tennessee for the second of three presidential debates, was not without its punch lines.
Persily likened his role as an election law analyst to that of an anthropologist who studies cannibalism. “You have to suppress normal human impulses of disgusting revulsion and replace them with fascination and curiosity,” he said. “So it’s in that vein that I approach the 2008 election.”
Columbia Law School, founded in 1858, stands at the forefront of legal education and of the law in a global society. Columbia Law School joins traditional strengths in international and comparative law, constitutional law, administrative law, business law and human rights law with pioneering work in the areas of intellectual property, digital technology, sexuality and gender, and criminal law.
—Ben Frumin