The Capital Markets Expert Is Only Second Academic to Serve

New York, July 29, 2016—Columbia Law School Professor Kathryn Judge has been appointed to the Financial Research Advisory Committee of the Office of Financial Research (OFR). She will also serve as a member of the research subcommittee.

Established by the Dodd-Frank Wall Street Reform and Consumer Protection Act of 2010, the OFR works to promote economic stability by identifying, measuring, and analyzing risks across the financial system. Its Financial Research Advisory Committee provides advice and recommendations to the OFR, and helps the OFR develop best practices for data collection and research. Committee members include academics and industry leaders, each of whom must be a recognized expert in economics, financial institutions, financial markets analysis, risk management, or related fields. Judge is only the second legal academic to serve on the committee. 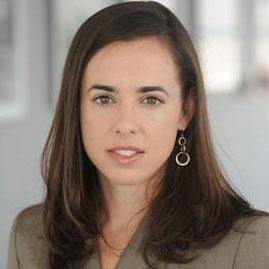 Judge is an expert on financial regulation, banking, and financial innovation whose research has been published in numerous top law reviews. Her most recent article, “Intermediary Influence,” published by The University of Chicago Law Review, was selected by her peers as one of the top corporate and securities articles of 2015. Judge serves as an editor of the Journal of Financial Regulation, an officer of the Association of American Law School’s Section on Financial Institutions and Consumer Financial Services, and a member of the New York City Bar Association’s Banking Law Committee, among other roles. As well, she serves on the editorial board and as a contributor to The CLS Blue Sky Blog, Columbia Law School’s Blog on Corporations and the Capital Markets.
"Kate Judge is a rising academic star whose scholarship on the complexities of capital markets includes a rigorous focus on practical, real-world problem solving," said Gillian Lester, Columbia Law School Dean and the Lucy G. Moses Professor of Law. "I couldn’t be more thrilled that the leaders of the U.S. Treasury Department’s Office of Financial Research have recognized her talent, and I'm sure she will contribute greatly to the Financial Research Advisory Committee."
Prior to joining the Law School faculty, Judge worked as a corporate associate at Latham & Watkins in San Francisco. She also clerked for Judge Richard A. Posner of the U.S. Court of Appeals for the 7th Circuit and U.S. Supreme Court Associate Justice Stephen G. Breyer. Judge graduated from Stanford Law School, where she was awarded the Urban A. Sontheimer Third-Year Honor for having earned the second-highest cumulative grade point average in the graduating class.
“The creation of the OFR is one of the most important features of the Dodd-Frank Act.” said Judge. “Much of my work highlights the informational challenges that arise from the complexity of today’s financial institutions and instruments, and the ways those challenges are exacerbated by the patchwork of federal financial regulators. The OFR is uniquely positioned to tackle these important issues. I feel honored to serve on this committee, alongside so many leading academics and practitioners. And I look forward to helping the OFR continue the important work that it has been doing.”