New York, July 10, 2012—When word came that Katharina Pistor, Columbia Law School’s Michael I. Sovern Professor of Law, had been chosen to receive the Max Planck Research Award for 2012, the comparative law expert was in a hotel room in Florence, Italy, preparing for a student’s dissertation defense.

Pistor, to be sure, was not expecting the news she received when the Max Planck Society’s president, Peter Gruss, interrupted her background reading with a call. “I picked up the phone, and he said: ‘I have good news. You were just awarded the Max Planck Research Prize and 750,000 euros,’” Pistor says, recalling the moment when she realized she would formally join the ranks of some of the world’s most noted academics.

After the immediate shock subsided, Pistor (below) made a small request to Gruss. “You have to give me a break right now,” she said, “I need a moment to digest this.” 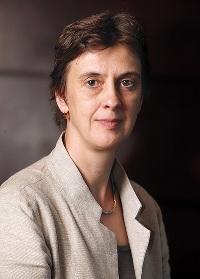 Considering the stature of the honor, Pistor’s reaction to the news seems like an entirely reasonable response. But taking into account that this year’s criteria for the award—which is presented to two academic professionals in the natural and engineering sciences, the life sciences, and the humanities on an annually alternating basis—was “Regulations of International Financial Markets,” the selection of Pistor is far from a surprise.

During the past 10 years, Pistor has solidified her position as one of the world’s preeminent authorities on the interplay between law, sovereign states, and the global financial system. In 2010, she established Columbia Law School’s Center on Global Legal Transformation, a multi-disciplinary venue to re-conceptualize existing theories of law and governance. “We need a new way of thinking about these issues because the current way doesn’t lead to any solutions,” she says, referring to the impetus for the center. “I am not suggesting that I have found the silver bullet that will fix everything, but I want to look at global finance through the lens of law.”

As a Max Planck Research Prize recipient, Pistor can use the award money during the next five years to fund new and innovative research. She said she plans to partner with various colleagues in Germany, New York, and Oxford, but also with those in emerging markets, such as Brazil and India. Specifically, Pistor wants to “scale up” two facets of her work that are already underway at the Center on Global Legal Transformation—analyzing the impact of financial regulatory efforts undertaken by various nations on the global financial system and probing the limitations of emergent global property rights regimes.

The Max Planck Research Prize is awarded jointly by Germany’s most prestigious research organizations, the Alexander von Humboldt Foundation and the Max Planck Society. The latter encompasses various institutes and is named after the German scientist who discovered quantum physics. The society operates a number of research hubs in Germany and abroad, in places like Rome and Florence. Only current or former university presidents can submit nominees for the Max Planck Research Prize, which is awarded each year to one German-based and one internationally-based academic. The economist and director of the Max Planck Institute for Collective Goods, Martin Hellwig, joins Pistor as a 2012 recipient.

As explained on the Max Planck website, this year’s award seeks to “support scientific collaboration between national and international economies in this area and to develop sustainable overall solutions.”

That is no small task considering the severity of economic problems most western economies are currently facing. “If you want to find a solution, you have to cut the interdependent financial system back to a national size,” Pistor says. “But if we want to keep these international borders open, we have a much more complex system to manage.”

To improve the current situation, Pistor adds that she “wants to identify the most vulnerable points in the system and show: ‘Here is where new instabilities are building and where we have to monitor, if not intervene, to prevent another crash.’ We have to be much more on our toes.”

It is not without a bit of irony that Pistor is now being awarded a prize that bears the name Max Planck. In 1998, she worked at the Max Planck Institute for Foreign and International Private Law in Hamburg. She recalls at the time having to navigate what would prove to be a key crossroads in her career. After a year in Hamburg, she accepted a job at Harvard University’s Kennedy School of Government before accepting a faculty position at Columbia Law School in 2001. She credits the United States’ academic system for affording her the flexibility to pursue her wide-ranging interests. “Had I stayed in Germany,” she says, “I could not have done the work that prepared me for this award.”

Pistor does not expect the award to affect her course load in the fall, or to have a dramatic logistical impact on her teaching. She does, however, foresee spending a bit more time in her native Germany over the next several years to facilitate an even closer examination of the complex problems facing European economic integration. On that of-the-moment topic, Pistor treads carefully, but holds firm to a basic principle.

"If you want countries to resolve crises at the national level, then they need to be able to control capital inflows, but that is not consistent with a single currency,” she says. “Still, I am a bit skeptical about whether the centralization of financial governance is the right strategy for Europe. I don’t think it is a great idea to put more straight jackets around democratically elected governments or to presume that there is a one-size-fits-all model.”