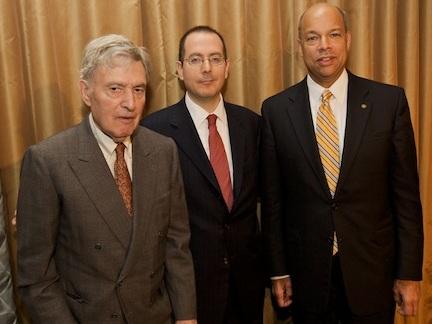 (Left to right: Jack Greenberg, Dean David Schizer, Jeh C. Johnson)
The Honorees
Jack Greenberg is a legendary legal crusader in the civil rights movement and a champion of human rights who has advanced equality, integration, and education globally. As a student at Columbia Law School, Greenberg met NAACP Legal Defense and Educational Fund (LDF) Director Thurgood Marshall. The future chief justice of the Supreme Court hired Greenberg in 1949, and several years later, at age 27, Greenberg helped successfully argue Brown v. Board of Education before the Court.
In 1961, Greenberg was named director-counsel of the LDF, a position he held until 1984, when he became a full professor and vice dean at Columbia Law School. Greenberg has received countless awards over the years, including The Presidential Citizens Medal, which President Bill Clinton bestowed on him “for his more than 50 years as a fierce and tireless defender of civil and human rights.” Greenberg is the author of the classic book on civil rights Crusaders in the Courts: How a Dedicated Band of Lawyers Fought for the Civil Rights Revolution.
Jeh Johnson’s passion for public service paved the way for his current post as the chief legal officer of the Department of Defense and as the legal adviser to the Secretary of Defense. Building upon his early career as an Assistant U.S. Attorney for the Southern District of New York, Johnson became a successful trial lawyer in private practice at the law firm of Paul, Weiss, Rifkind, Wharton & Garrison, where he personally tried some of the most high-profile commercial cases of his day while undertaking numerous significant pro bono cases. In 1994, Johnson became the firm’s first African-American partner.
In 1998, Johnson was appointed by President Clinton to be general counsel of the Department of the Air Force, a position he held for 27 months, before returning to private practice. In early 2007, Johnson was recruited by Senator Barack Obama to become part of the Illinois senator’s presidential campaign. Johnson’s campaign efforts ultimately led to his nomination and confirmation in February of 2009 as the Defense Department’s general counsel. Johnson is a fellow in the prestigious American College of Trial Lawyers and a member of the Council on Foreign Relations, as well as the American Law Institute.
The Wien Prize
The Wien Prize honors individual attorneys who, like Lawrence Wien, a Columbia Law School graduate of 1927, put their resources and legal skills to work for the public good. The recipients serve as positive role models for both the profession and for law students.
Lawrence A. Wien, a New York lawyer and real estate investor, enjoyed a career of imaginative professional leadership and creative philanthropy. The founder and senior partner for 60 years of Wien & Malkin, Wien served as chairman of the board of trustees of Brandeis University, as president and chairman of the Federation of Jewish Philanthropies, and as vice chairman of the Institute of International Education, WNET/Channel 13, the UN Association of the USA, and the Lincoln Center for the Performing Arts.
Wien was also an alumni trustee of Columbia University and a mayoral appointee to the New York City commission against poverty. He is widely regarded as the pioneer who made possible real estate investment by individuals through the first public real estate syndication.
The prize, established in 1982, is bestowed annually with the participation of the Wien family.
# # #
Columbia Law School, founded in 1858, stands at the forefront of legal education and of the law in a global society. Columbia Law School joins its traditional strengths in international and comparative law, constitutional law, administrative law, business law and human rights law with pioneering work in the areas of intellectual property, digital technology, sexuality and gender, criminal, national security, and environmental law.