Professor Hans Smit Remembered as an Odysseus at Memorial Service

New York, Feb. 20, 2012—A huge crowd turned out at Columbia Law School on Feb. 9 to celebrate the life of Hans Smit ’58 LL.B., a leading scholar and practitioner in the fields of international arbitration and international procedure who taught at the Law School more than 50 years until his death on Jan. 7. Smit was the Stanley H. Fuld Professor Emeritus of Law.

“This is a terribly sad day for all of us,” said David M. Schizer, Dean and the Lucy G. Moses Professor of Law. “Hans was a defining presence in the field of international arbitration and, of course, a leading light for the faculty.”
Dean Schizer recalled that in addition to teaching courses on international law, conflict of law, and civil procedure, Smit founded the Columbia-Leiden-Amsterdam Summer Program in 1963 and served as director of the Parker School of Foreign and Comparative Law at Columbia Law School from 1980 to 1988. He noted that following the news of Smit’s passing, the school received “a flood of poignant emails” from Smit’s former students, including one that read: “Hans Smit was a wonderful mentor, one-of-a-kind, inspiring, and the finest teacher I ever had. He was Mr. Columbia Law to me.”

A videotape of the event can be viewed here.

U.S. Supreme Court Justice Ruth Bader Ginsburg ’59 spoke fondly of Smit, who had mentored her when she was a young lawyer and eventually recruited her to join the Law School as its first female tenure-track professor in 1972.

Ginsburg recalled first meeting Smit in 1961, when he invited her to lunch at the Harvard Club.
“In those ancient days,” she said, “I had to enter through the little red side door reserved for women. Not long into our conversation, Hans asked, ‘Ruth, how would you like to co-author a book about civil procedure in Sweden?’”
Ginsburg accepted the offer and subsequently became involved in the Law School’s Project on International Procedure, which Smit launched and oversaw. She recalled Smit’s impact on her career.
“With contagious confidence, he encouraged me to speak in public, to write for law journals, even to take over his civil procedure class for a week,” she said.
In addition to bringing Ginsburg on board, she recalled, Smit later recruited both her husband and her daughter to teach at Columbia Law School, where Jane C. Ginsburg has served many years as the Morton L. Janklow Professor of Literary and Artistic Property Law. In conclusion, the justice recited Smit’s remarkable accomplishments.
“Hans, those who experienced him as teacher, colleague, writer, or bon vivant would confirm, was a man of many strengths,” Ginsburg recalled, “fluent in several languages, legendary water polo champion, skilled arbitrator, avid bargainer, discerning collector of fine art, astute real estate investor, and remarkable renovator of buildings and homes. Like Odysseus, he was a man never at a loss. I count it my great good fortune that, for more than 50 years, he was my counselor, working colleague, and treasured friend.” 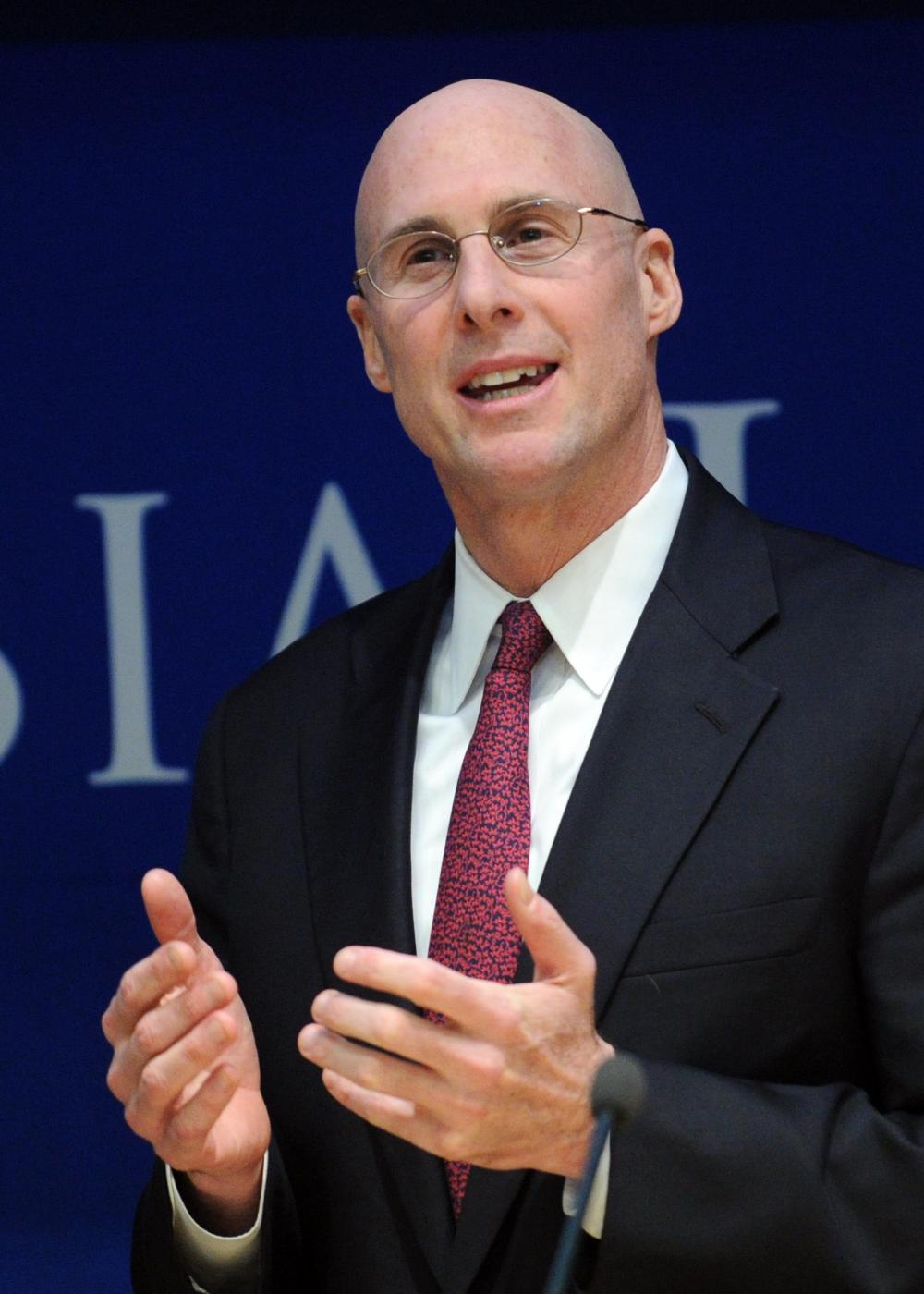 Ginsburg’s remarks can be read here.
The tone of the comments became light-hearted when Smit’s son, Robert H. Smit ’86, took the stage. The younger Smit is co-chair of the international arbitration and disput e resolution practice at Simpson Thacher & Bartlett.
“My father would h ave been moved to see so many of you here,” Smit began. “He would have loved to have been here himself, because there was nothing that he lo ved more than celebrating himself!”
Smit recalled h ow his father had inspired his career choice.
“Growing up with my father,” he said, “you can imagine that it was hard for my sister and me to get out of his considerable shadow. But there was no resisting his passions, and I followed my father into law and into his beloved Columbia Law School.”
Rather than giving his son preferential treatment, the younger Smit said, the elder Smit asked that all of his son’s professors make rigorous demands on him. His father had a way of terrorizing him, the younger Smit recalled, but always with a grin.
“It was an impish grin that said, ‘I’m not taking myself so seriously,’ and that said, ‘I love what I do so well,’” Smit said. “He was a boy among men in the profession, in terms of his enthusiasm and love for the law.”
The next speaker, Michael I. Sovern, the Chancellor Kent Professor of Law and President Emeritus of Columbia University, joined the Law School faculty three years before Smit, in 1957.

“Hans was a giant—almost literally at six-four, and certainly metaphorically,” Sovern said. In addition to making substantive contributions to the international law program, he noted, “Hans was one of those memorable teachers whose students, decades later, still reminisce about his classes.”

Smit was then remembered by a former student, Michael J. Volkovitsch ’93, who is now a partner with Cleary Gottlieb Steen & Hamilton. 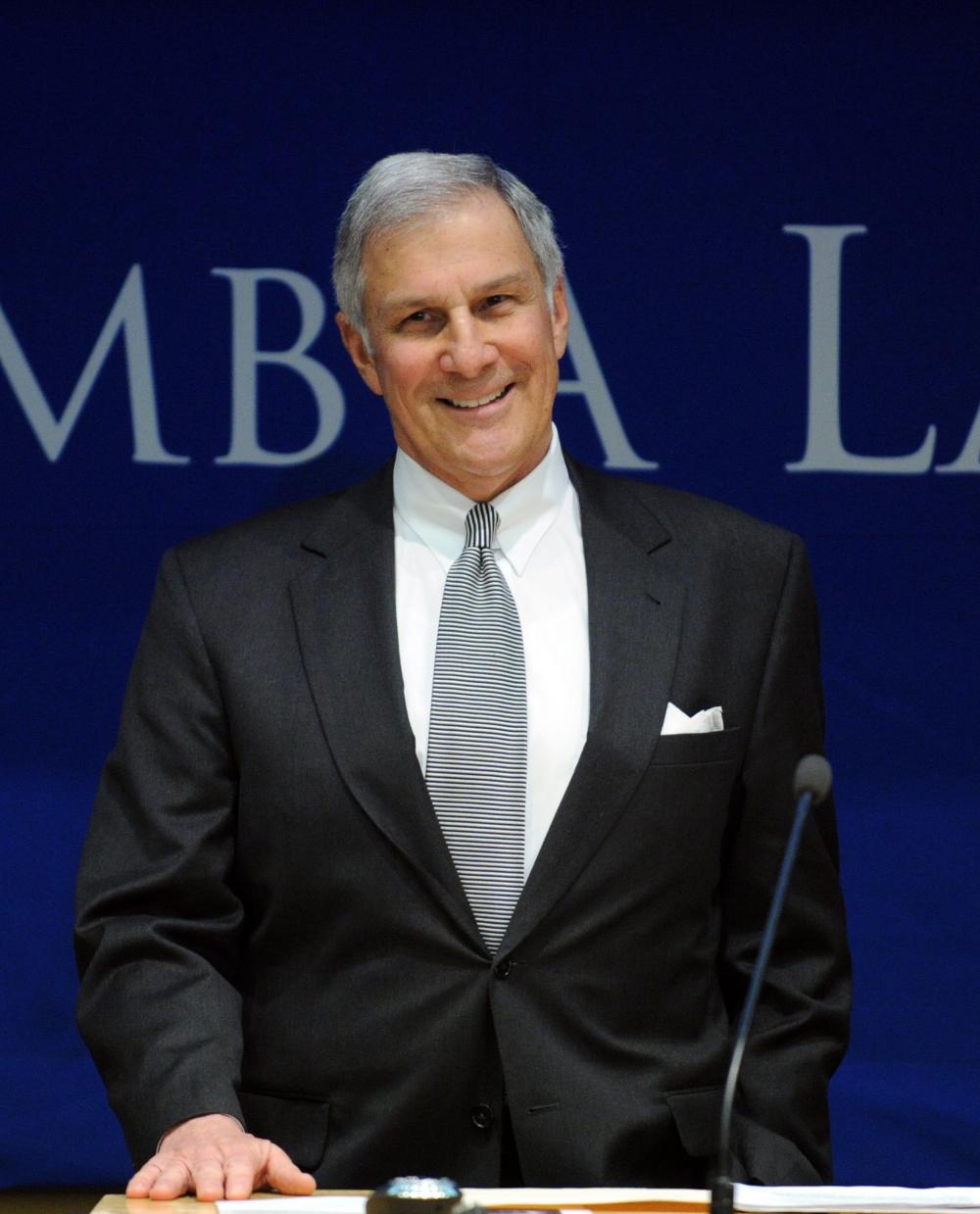 Volkovitsch recalled that in class Smit frequently articulated his “profound belief that this law school should be the focal point for the practice of international law.” Smit also would begin each class with a short digression on his current extracurricular pursuits, Volkovitsch added, and these digressions were so interesting that students were always on time.
Sports were among Smit’s beloved extracurricular activities, and the final speaker, Charlie Gulotta, was a fellow member of the swimming and water polo teams at the New York Athletic Club. Gulotta illustrated his anecdotes about Smit with projections of photos of the professor at poolside.
“Hans loved competition,” Gulotta said. “He was a fighter, a battler, a combatant. He would scope out competitors to make sure they weren’t better than him, because he always wanted to win.”
Smit was not only proud of himself, but of the entire Law School community, according to his teammate.
“Hans always told me that Columbia Law School professors and students were better than those at any other law school,” Gulotta said in closing. “Hans was unique, and we will miss him. He was a good teammate, a fierce competitor, and a great friend. May he rest in peace.”
First speaker pictured, Robert H. Smit ’86. Second speaker pictured, Charlie Gulotta, Smit's teammate at the New York Athletic Club.